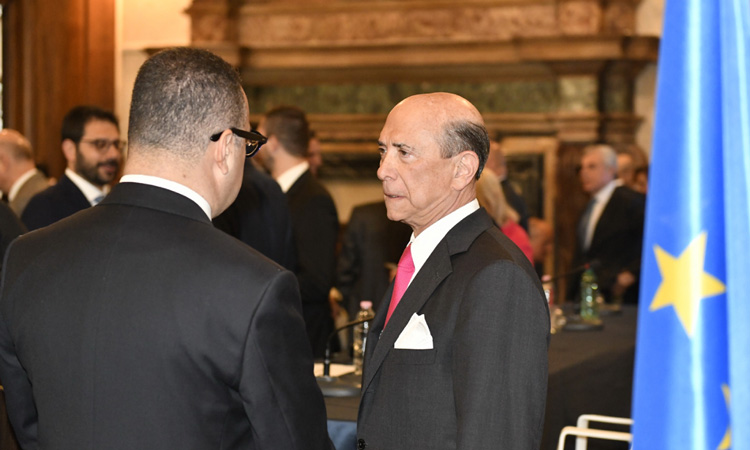 Before I begin, I’d like to thank the Center’s President De Gennaro for the opportunity to be here today.  A special thanks to everyone at the Centro Studi Americani for organizing this timely event.  I also look forward to hearing the remarks of Under Secretary Angelo Tofalo.

One of the things I enjoy most about being Ambassador in this great country is we can come together at places like CSA in a spirit of partnership to talk about important issues, and draw on experts from both sides of the Atlantic to find collaborative ways to move forward.

So thank you for what you do here.  Thanks to all of you in the audience for making this a meaningful event.

I have spoken here before about the historic transatlantic alliance.  I am especially pleased today to help mark the 70th anniversary of NATO.

First, let me highlight the source of our collective strength:

Our ironclad commitment to shared values.

The United States, Italy, and ten others gathered in Washington on April 4, 1949 to reaffirm – and I quote from the preamble of the North Atlantic Treaty –

“their desire to live in peace with all peoples and all governments.”

The Atlantic Alliance has since grown.  And we have grown stronger with our new members.  We especially welcomed those who courageously freed themselves from tyranny.

In that vein, NATO’s door remains open to new members.  We look forward to welcoming North Macedonia soon into our family of shared values.

And with each new members, we renew our unquestionable commitment to collective defense in Article 5.

And we pledge to protect the principles of Article 2, which is to defend free institutions and promote stability and prosperity.

Consider the world after the war.

In 1948, Soviet forces blockaded rail, road, and water access to Berlin.  The United States led the response to deliver food and fuel in what is now known as the Berlin Airlift.  Against this backdrop, NATO was born.  And the Soviet blockade ended shortly thereafter.

Our unflinching defense of liberty and free enterprise vanquished a regime of undeniable, unforgiving, and soul-crushing oppression.

In 2019, we also mark the 30th anniversary of the fall of the Berlin Wall.

Built in 1961, its pieces have now lain in museums for longer than it cast its dark shadow over Europe.

The United States is especially grateful for Italy’s enduring leadership in Kosovo and sacrifice in the shared fight against terror in Afghanistan.

The Cold War is over, but NATO is as relevant today as it was in 1949.  New challenges combine with old ones.  The geopolitical environment is increasingly competitive.

Therefore, we owe it to our citizens – and to each other – to invest in our security.

In the last two years, we have made real progress as an Alliance.

Since 2016, European Allies and Canada have spent an extra $41 billion on defense.  By 2020, we expect this figure to have been increased to $100 billion.

Investing in defense means prioritizing modernization – like the F-35.  Italy and its state of the art production facility at Cameri are cornerstones in the Joint Strike Fighter program.  If you haven’t already, I highly encourage you to visit the amazing facility at Cameri.

The F-35 represents remarkable, cutting edge technology – and we sincerely hope Italy will take advantage of building it here.  In the event of cuts, Italy – as a partner, not a purchaser – risks squandering a once-in-a-generation opportunity to build upon its strong defense industry, bolster its economy, and create jobs.

Let me speak for a moment about Russia.  Now, it is clear NATO would rather have the Kremlin as a friend than a foe.   And we continue to have important conversations with Moscow on security issues.  NATO remains committed to a policy that combines dialogue with defense and deterrence.

But instead of working with us, Russia has chosen the path of aggression.

Russia’s violation of the Treaty poses a direct threat to our allies.  It cannot go unanswered.

As President Trump stated, Russia has left us no choice but to withdraw from the Treaty.  The United States cannot be the only country bound by this Treaty, or any other.

The Alliance remains united on this, while remaining open to effective international arms control, disarmament, and non-proliferation.

There are those who call for removing sanctions on Russia now, despite Russia’s failure to improve its behavior.

Do they seek to justify Russia’s invasion of Georgia in 2008?  Can they overlook the fact that Kremlin-backed assassins deployed a military-grade nerve agent on British soil?

And how do they justify Russia’s attack near the Kerch Strait on November 25.  It was a dangerous escalation and violation of international law.  And it is unconscionable that, as I speak, Ukrainian ships and sailors remain in Russia’s custody.

NATO Allies agree sanctions are our best diplomatic tool to bring Russia back into compliance with the values that we share with Europe.  We do not want war.  But we cannot accept such brazen violations of international law and norms.  Inaction is not an option.  And it’s clear dialogue has proved to be insufficient.

Relaxing sanctions now, without any positive change in Russian behavior, would send the wrong message and encourage further provocations.

The coordinated response on March 15 among the United States, EU, and Canada to impose sanctions was clear:

We cannot forget Russia’s provocations, we cannot return to business as usual, and the international community cannot stand by while Russia continues to violate international norms and laws.

Russia is not the only international threat to NATO.  An increasingly assertive China seeks to subvert European and transatlantic unity.

The President is committed to maintaining Peace through Strength.  He understands that our economic strength and capacity to innovate give us a strategic advantage.

There is no doubt our democratic, free-market societies have lifted millions out of poverty.

China’s authoritarian approach, however, is antithetical to the freedom of nations.

Again, there is no question NATO would prefer constructive relations with Beijing.

But China is not a democracy; its leader has no term limits, and there is no freedom for individuals.  Thus we must be vigilant in our dealings with China.

Chinese law, for example, requires its firms to support and assist Beijing’s vast security apparatus.  That is why we are calling on our partners to avoid 5G vendors that could compromise the integrity of global communications.

As Secretary Pompeo has explained, the United States may not be able to share information with countries that adopt Chinese 5G technologies and incorporate them into their critical information systems.

Decisions about infrastructure for 5G will have long-term implications.  They should not be rushed into.

The privacy and liberty of our citizens is at stake, and we are seriously concerned there could be consequences for the interoperability of the Alliance.

We are confident capitalism will prevail in a competition with state-owned enterprises that don’t operate according to market rules.

However, it is essential the U.S., Italy, and other free nations work together to counter the predatory practices that disrupt free markets.

In addition to Russia and China, terrorism continues to pose a direct threat to our citizens.

It is evident that NATO’s transatlantic and southern security concerns are linked more than ever before in the Alliance’s history.

The United States, Italy, and 77 other members of the Global Coalition to Defeat ISIS liberated 100 percent of the territory once held by ISIS in Iraq and Syria.

With their strongholds eliminated, foreign terrorist fighters are returning to North Africa and the Sahel.  They are searching for safe havens from where they can plot attacks on members of NATO.

These challenges make NATO cooperation more, not less, important than ever before.

Italy and the United States agree we must cooperate more closely to address threats in the Mediterranean region.  And we applaud Italian initiative like hosting NATO’s Hub for the South in Naples.

Our mutual concerns were the impetus for the U.S.-Italy Strategic Dialogue that President Trump and Prime Minister Giuseppe Conte launched at the White House in July 2018.  Through this productive forum, we continue to deepen the U.S.-Italian partnership.

We are grateful for Italy’s leading role in NATO and the generous hospitality extended to 30,000 U.S. military, civilian personnel, and family members.  Our armed forces serve shoulder-to-shoulder in Afghanistan, Iraq, Kosovo, and around the world to advance peace and security.

I know Secretary Pompeo is excited to host Allied counterparts, including Foreign Minister Moavero Milanesi, in Washington for the NATO Foreign Ministerial on April 3rd and 4th.

On the eve of NATO’s 70th anniversary, I would like to recall President Harry Truman’s words at the time of the signing of the North Atlantic Treaty:

“We are not only seeking to establish freedom from aggression and from the use of force… but we are also actively striving to promote and preserve peace throughout the world.”

Our sovereign states are devoted to defending these principles without diluting our independence or unique national identities.

Seventy years later, the Atlantic Alliance is more essential than ever:

In closing, we must stand together for the values that built an unbreakable bond and continue to sustain an unshakeable Alliance: 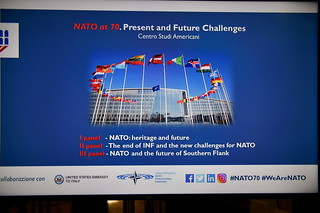