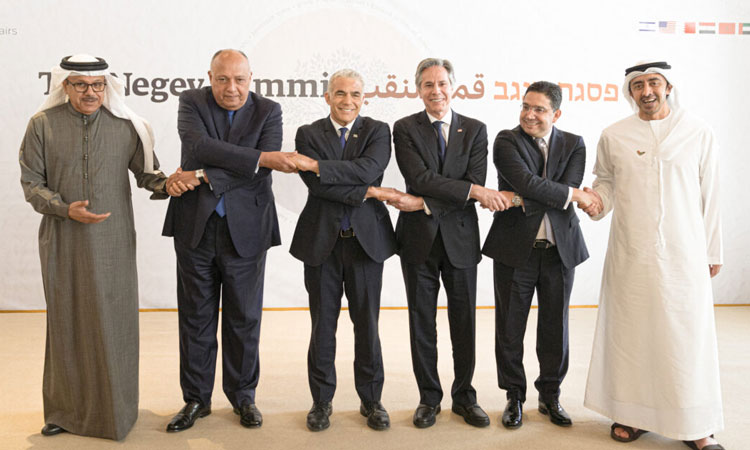 U.S. Secretary of State Antony Blinken and the foreign ministers of five other countries sought to advance partnerships at the Negev Summit on March 28, in Sde Boker, Israel. They are (from left), Abdullatif bin Rashid al-Zayani of Bahrain, Sameh Shoukry of Egypt, Yair Lapid of Israel, Blinken, Nass

The United States supports peace and prosperity for Israelis and Palestinians and is committed to preserving the possibility of a two-state solution.

“Israelis and Palestinians deserve to enjoy equal measures of freedom, security, opportunity, and dignity,” U.S. Secretary of State Antony Blinken said following a March 27 meeting with Israeli Prime Minister Naftali Bennett in Jerusalem. “And that’s one of the principal reasons we support a negotiated two-state solution.”

Blinken met with Israeli and Palestinian leaders, including Bennett and Palestinian Authority President Mahmoud Abbas, on the first part of the March 26–30 trip that also included visits with officials in Morocco and Algeria.

In remarks in Jerusalem and Ramallah, Blinken highlighted concrete steps the United States is taking to ensure Israel’s security and to advance peace and prosperity for Palestinians.

Blinken noted the United States and Israel stand together in addressing challenges posed by Iran’s regime, including its nuclear program.

Blinken and Bennett also discussed fostering peaceful celebrations of Passover, Ramadan and Easter across Israel, the West Bank and Gaza.

During a March 27 meeting with Abbas in Ramallah, Blinken emphasized the renewed U.S. relationship with the Palestinian Authority and support for the Palestinian people.

Since April 2021 the United States has provided over a half-billion dollars in assistance for Palestinians, including through the U.N. Relief and Works Agency for Palestinian Refugees in the Near East. U.S. foreign assistance supports small businesses and job training, and it brings rapid relief to the neediest households in the West Bank and Gaza.

“At the heart of all of this is an ongoing, enduring commitment to the basic principle of the two-state solution,” Blinken said of the meeting.

The secretary’s trip to Israel included his participation in the Negev Summit, along with Israeli, Emirati, Bahraini, Moroccan and Egyptian foreign ministers. The summit was a historic moment that allowed the ministers to celebrate the importance of building new connections among people and explore opportunities to deepen those connections.

The secretary’s trip included meeting with officials in Morocco and Algeria to expand bilateral cooperation and advance security and prosperity for both countries and the region.

In remarks to reporters, Blinken highlighted long-standing U.S.-diplomatic ties with Morocco, mutually beneficial trade, shared efforts against the COVID-19 pandemic and ongoing cooperation to reduce the impacts of drought that are harming agricultural production and raising food costs in Morocco.

“Partners show up for each other in difficult times, and as Morocco experiences one of the worst droughts in decades, we’re doing what we can to help,” Blinken said.

Blinken then traveled to Algiers, Algeria, where he met President Abdelmadjid Tebboune and Foreign Minister Ramtane Lamamra. The United States works with Algeria on issues ranging from counterterrorism and security to bilateral trade and English-language instruction.

The United States recently signed a three-year agreement with Columbia University in New York and the Algerian Ministry of Higher Education and Scientific Research to strengthen Algeria’s curriculum for teaching English at universities.