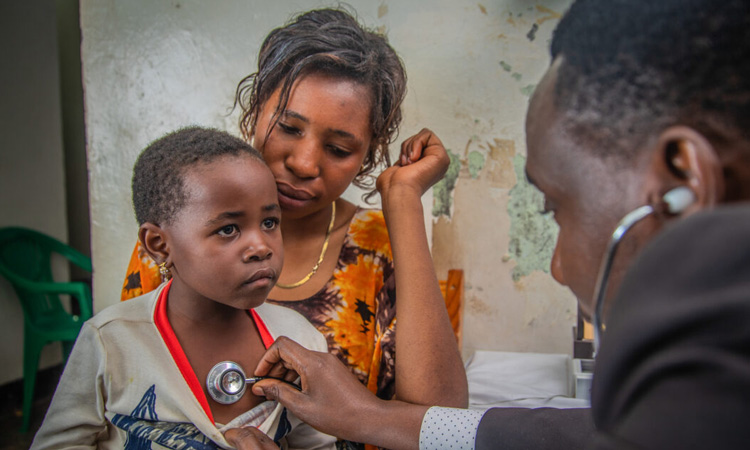 The U.S. government has funded and implemented sustainable financing initiatives that support health care in more than a dozen African countries, including Tanzania, where a child receives treatment. (USAID/Riaz Jahanpour)

The United States is a strong partner with African nations, supporting public health and economic growth across the continent.

Deputy Assistant Secretary of State for African Affairs Akunna Cook told an Africa Day celebration May 25 that the Biden administration is committed to advancing America’s long-standing partnerships with African nations.

“We believe in the nations of Africa,” she said in virtual remarks at the event, hosted by the African Union’s Mission to the United States and attended by diplomats from African countries. “The United States stands ready to be a partner to you in solidarity, support, and mutual respect.”

Africa Day celebrates the founding of the Organization of African Unity on May 25, 1963. Now called the African Union, the group of 55 African nations is dedicated to “an integrated, prosperous, and peaceful Africa, driven by its own people and representing a dynamic force in the global arena.”

Cook, who is the daughter of Nigerian immigrants, said the United States is committed to fighting disease in Africa. Over the past 20 years, the United States has invested more than $100 billion in Africa’s public health, through programs such as the U.S. President’s Emergency Plan for AIDS Relief (PEPFAR) and partnerships with the Africa Centres for Disease Control and Prevention.

PEPFAR has saved over 20 million lives and improved the lives of millions more through significant improvements to Africa’s health care systems, widespread testing and millions of doses of lifesaving antiretroviral treatment.

COVAX is an international partnership delivering COVID-19 vaccines to low- and middle-income countries. Health care workers in Kenya, Ghana and Côte d’Ivoire are among those getting vaccinated as a result of COVAX vaccine deliveries.

The U.S. government advances trade and investment between the United States and Africa, through the Prosper Africa initiative, Cook said. Since June 2019, the program, which connects buyers, suppliers and investors in the two regions, has supported 500 deals across 44 countries, worth an estimated $47 billion.

Through its partnership with the AU Commission, the United States is working to build the African Continental Free Trade Area to provide new markets and opportunities for African businesses.

“On Africa Day and every day we thank those who work tirelessly to help achieve our shared vision of a peaceful, secure and prosperous Africa,” Cook said.