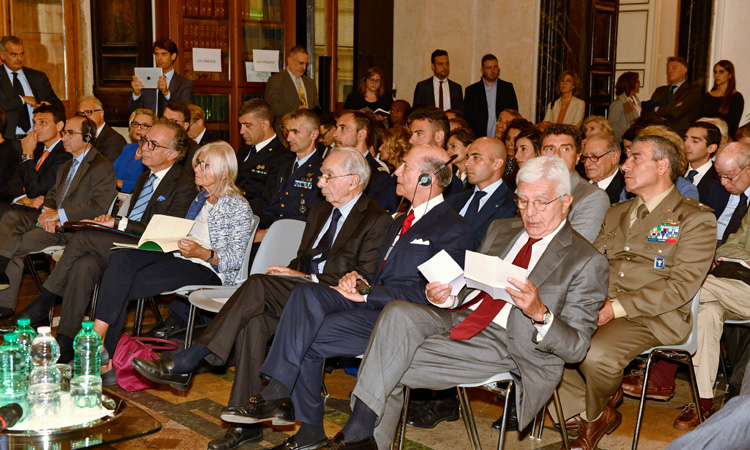 American Perspectives on Russia and its Role in Europe

First of all, my sincere thanks to Gianni De Gennaro, President of the Centro Studi Americani (the Center for American Studies), and to Giulio Tremonti, Chairman of the Aspen Institute Italia, for inviting me to participate once again in the Transatlantic Forum on Russia.

Thanks also to Director Carlotta Ventura, her staff, and others for organizing this forum.  Thanks to all of you for your work and to all present – speakers and audience members — for joining in today’s discussions.

Those of us working in government, as I do as the United States Ambassador to Italy, rely upon the expertise and insights of those outside of government.  Listening to, and engaging with, those outside of government is the best way to determine how to address the great challenges we face – to debate the issues and recommend the best way forward.  The United States and Italy are partners and allies with political, economic, and cultural ties strengthened over generations of cooperation.  In 2019 we continue our work of promoting prosperity, security, and peace.  And as we pursue those goals, China and Russia are among the mutual challenges we face.

First, I want to emphasize that the United States takes a realistic view of Russia.  We recognize that Russia is an influential player on the world stage, a political and military power, and an economic power in some areas. We observe its capacity to form strategic partnerships with rising powers like China and reckless regimes like Iran and Syria.

Our view is that, we should cooperate with Russia where it is in our interest and the interest of our allies that we do so.  And where we cannot cooperate, we should not.

Russia’s record over the past several years is not a good one.  We cannot turn a blind eye to Russia’s violations of borders — most recently, its land grabs in Crimea and its violent and destabilizing actions in eastern Ukraine.  As Secretary Pompeo has said, Crimea is Ukraine.  The United States will maintain respective sanctions against Russia until the Russian government returns control of Crimea to Ukraine and fully implements the Minsk agreements.  In that vein, we support continued EU sanctions in response to Russia’s actions in Crimea.

We also cannot ignore Russia’s interference in democratic elections; its robust disinformation operations and efforts to sow divisions within democratic societies; its targeted attacks on Russians living in Europe (and perhaps elsewhere, too); and its lack of cooperation regarding the shootdown of a passenger aircraft over Ukraine.

That’s only a partial list of Russia’s disruptive actions, actions that undermine security and prosperity.

One of the levers of Russia’s influence in Europe is its energy resources, especially its natural gas resources.  There’s nothing wrong with Russia having those resources – we’ve had an energy revolution in the United States and are proud to compete in selling our gas to world markets – but Russia and Gazprom have shown a willingness to use natural gas and pipelines for political coercion.

In 2006, 2009, and 2014, Russia cut off gas shipments to Ukraine, which in turn threatened gas supplies to people in Central Europe and beyond.  In 2009 the cutoff took place during a particularly cold winter, and several people died while governments scrambled to respond.

These cutoffs demonstrate that Russia, for all its energy wealth and its role in supplying over 35 percent of the natural gas consumed in Europe, is not a reliable supplier.

The European Union and many of its member states have drawn the right lessons from these experiences, recognizing the strategic importance of diversifying their energy supplies, including by country of origin and delivery routes, as well as by fuel types.

This is why the Trans Adriatic Pipeline, or TAP, is such a strategically important pipeline, and why it is important that it proceed to completion on schedule in 2020.  It will open up a significant new supply route for natural gas to Europe, including to Italy — gas from Azerbaijan, non-Russian gas.

Italy rightly is looking to expand its sources of gas, including from the Eastern Mediterranean.  Further expansion of Italy’s LNG import capacity and of imports from the United States also would serve Italy’s goal of ensuring adequate energy supplies in the decades to come.

And, of course, Italy should work to develop its own energy resources, including oil and gas and renewables.

Why is the United States concerned about the energy security of its allies?  It’s because we see energy security as critical to a nation’s economic and political security.  Countries that are energy insecure are vulnerable and often less able to be strong allies in confronting global challenges.

In tandem, we have opposed Russian gas export pipelines, such as Nord Stream 2 or TurkStream 2 that run counter to energy diversification efforts and that, in fact, are designed to preserve or expand European countries’ strong reliance on Russian energy and serve Russia’s malign agenda with respect to Ukraine.

These pipelines are designed to allow Russia to drastically reduce or eliminate gas shipments through Ukraine.  They are primarily diversionary pipelines, rather than pipelines designed to bring new gas to Europe.  They will simply reroute the flow of gas to avoid Ukraine.

Together, Nord Stream 2 and TurkStream 2 can hurt Ukraine in two ways:  by depriving it of billions of dollars a year in transit fees; and by removing a disincentive to further Russian aggression in Ukraine.  As it stands now, Russia needs the Ukrainian pipeline system to meet some of its gas supply commitments in Europe.  It is not in Russia’s interest to impede its own gas exports.

If Russia and Gazprom were normal market competitors, the situation in Europe might be different.  But energy has been one of the tools Russia has used as a weapon.  And Italy and other European countries should not lose sight of that reality.  They should continue to pursue energy diversification and avoid projects that reinforce excessive reliance on Russia.

The bottom line is that any country doing business with Russia needs to do so with eyes wide open, and beware of relying too heavily on Russia.  Because reliance on Russia usually comes with strings attached.

That said, to reiterate my earlier point, we, members of the great transatlantic alliance, can and should look for areas where we can work with Russia.  And we should be prepared to take a firm stand against Russia and its malign actions when we cannot.