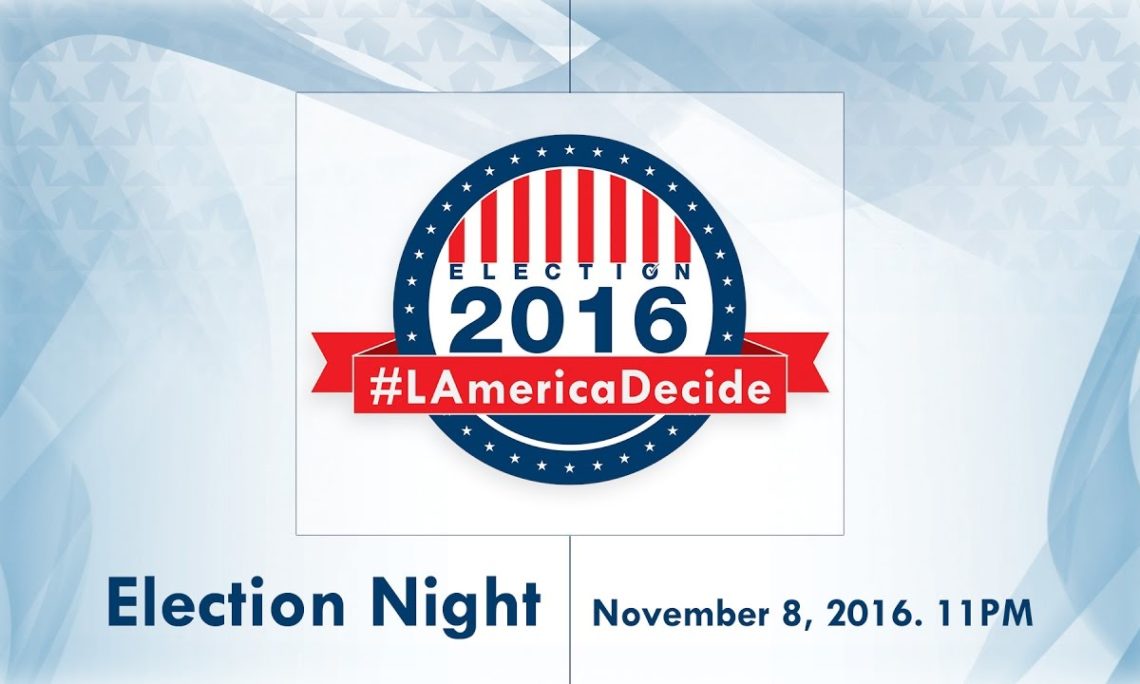 Welcome to “America Decides,” where an estimated 134 million voting Americans will determine who will occupy the White House for the next four years, and which parties will control the U.S. House of Representatives and the Senate.

Whatever happens, of one thing we can be sure: This election will change history like never before.

Before I go on to share some views on this election, I would like to ask for a great big round of applause for tonight’s sponsors, whose names you see on the poster boards and TV screens.

We’ve got 3 more hours until the polls close on the East Coast and 6 more hours for the Western states.

There’s a long night ahead, but the evening will be filled with news reports about what we can expect. Get ready for a roller coaster ride.

In a way, it’s appropriate that we stay up all night to watch the election returns. That’s because this campaign has been causing anxious Americans to lose sleep for weeks, if not months. Social media, 3 a.m. tweets, hacked emails have only added to the stress.

Never in my memory has there been an election that has presented two candidates with such starkly different views of America’s role in the world. If the 2008 and 2012 elections were about “Hope” and “Yes We Can,” the 2016 election has been about “Fear” and “No You Can’t.”

How has American politics fallen to such depths? Let me offer a few observations.

President Barack Obama was swept into office on a wave of high expectations. He accomplished much: health care reform which has provided health care insurance for 20-million previously uninsured Americans, creating 15.5 million new private sector jobs, a world-wide climate change agreement, diplomatic relations with Cuba, the Iranian nuclear accords. And most significantly, a $1 trillion stimulus plan that saved America’s economy from a state of free-fall at start of his term.

But a paralyzed American political system stymied President Obama from implementing many of his other electoral promises. His political opponents actually shut down the government, refused to pass budgets and blocked his judicial appointments from being voted on in the Senate. Compromise became viewed as weakness and obstructionism was the rule of the day.

The net effect? Many voters became frustrated by political gridlock and distrusted a system they believe no longer worked for them. This bitterly contested election is a byproduct.

But despite all of this, I’m optimistic about the power of America’s recovery. Experience has led me to ultimately trust the good will and sound judgment of the American people. The eagerness by which ordinary Americans want to bring this exhausting election to an end is a clear sign of their desire to move forward in a positive productive way.

California – where I spent much of my early career – offers a compelling example of the positive impact of structural reform. By the early 2000s, California was considered by many to be a failed state, with growing budget deficits, inability to pay its bills, and the lowest credit rating in the nation. In desperation, voters turned to Arnold Schwartzenegger to save them – just as in films. But even the Terminator couldn’t make any progress.

California’s salvation came, not in the form of a politician but by an innovative process adopted by the voters. Through a series of ballot referendums, California enacted major electoral and legislative reforms, including tax increases. These changes promoted transparency and accountability.

As a result, California has blossomed to become the world’s 6th largest economy larger than Italy. Californians have come to view government as an instrument to unite rather than divide, and Republicans and Democrats actually now work together. That has been a key factor in turning things around.

California may well serve as a bellwether for the nation and other nations.

Among America’s greatest strengths is its history as a nation of immigrants. Everyone in America has come from somewhere else including me. (My own Italian grandparents moved to the U.S. at the turn of the last century.) America has been gifted with access to the world’s best talent and its most courageous and entrepreneurial spirits.

Here is something else to be mindful of: As you watch the returns tonight, pay close attention to the back story on immigrant voters. Early voting shows a voter surge among these newer Americans especially those of Hispanic origin. Such high turnout may be decisive, tipping the election in key states like Florida, Pennsylvania, Arizona and Nevada.

Wouldn’t it be a fitting ending if America’s dreamers, our new immigrant citizens, prove to be the catalyst for restoring our faith – and the world’s – in the American dream?

Thanks for joining America on what I believe is one of its most important nights ever. May America choose wisely.