Ambassador Phillips first visit to the southern region of Calabria

On his first visit to the southern region of Calabria October 3-5, Ambassador Phillips paid courtesy calls on Reggio Calabria Mayor Giuseppe Falcomatà and Reggio Calabria Prefect Michele Di Bari. During the trip, the Ambassador also gave remarks at a reception in honor of the official launch of the AmCham in Calabria, and had the opportunity to visit the Museum of Magna Grecia, where he viewed the famous Riace Bronzes, two of the finest surviving sculptures from the ancient Greek world.  The museum is the most important cultural institution in the region.

On October 5, Ambassador Phillips visited the port of Gioia Tauro, one of the most strategic ports in southern Italy, and also met with Regional President Mario Oliverio. His three-day visit to Calabria ended with a tour of the University of Calabria near the town of Cosenza, and its business incubation center, the TechNest, where he learned about some of the key start-ups based there and encouraged further support for regional entrepreneurs to boost economic development in Calabria.

Local print, broadcast and online media provided extensive and positive coverage of Ambassador Phillips’ first visit to Calabria, and widely reported his statement that “Calabria has a lot of untapped potential, and if American CEOs were invited here, and local administrators were able to offer incentives and make credible proposals, I am sure that they would consider investing in this region and its people.” 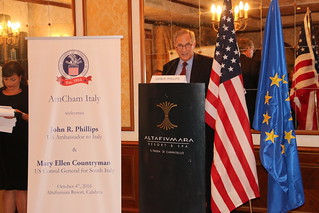