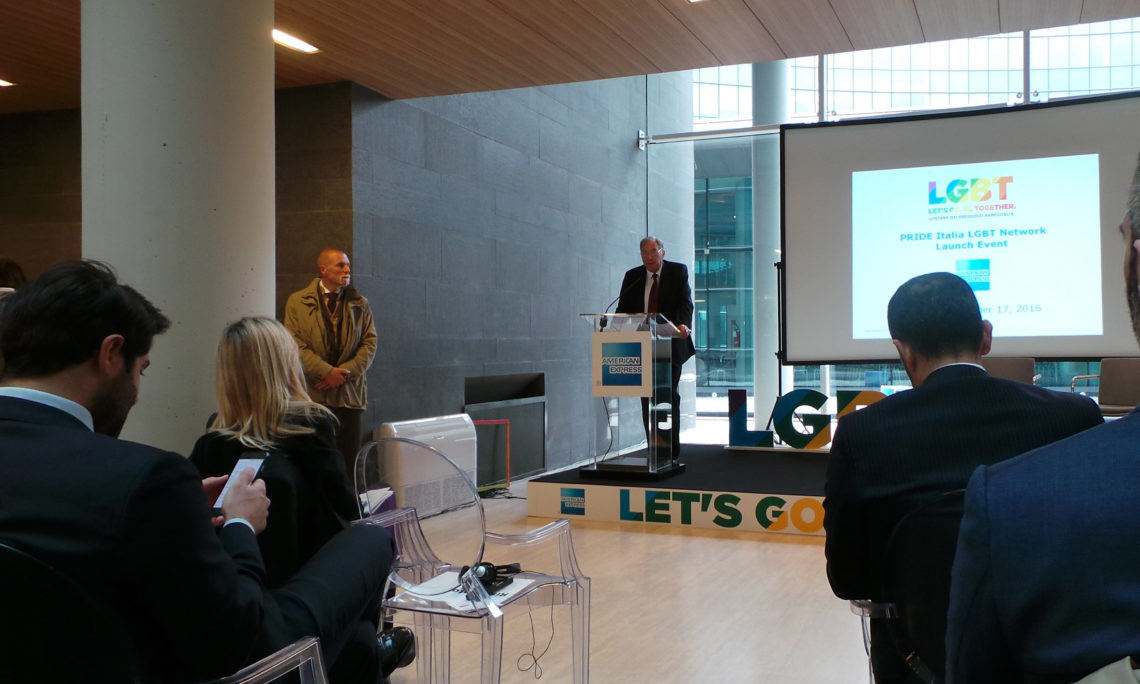 It is a pleasure to join you today for the launch of the American Express Pride Network.

I would like to congratulate American Express for establishing the Italian chapter of this program, which highlights the value of diversity and underlines your efforts to gain equal rights for the lesbian, gay, bisexual, trans, and intersex (LGBTI) community.

A company is a microcosm of society, and its employees should reflect the diversity of that society. But too often in our history, discrimination has impeded the rights of people based on characteristics such as gender or race, denying their ability to contribute in the workplace.

Discrimination has a social and political cost, but it also has a business cost. Lowering barriers to full participation and fostering a climate of inclusion and diversity for employees is important for growth in the private sector.

A diverse workplace means that an organization can draw on a wide range of ideas, skills, resources, and experiences. We have seen that an inclusive workplace leads to greater commitment and productivity among employees, which benefits both the organization and, in the case of the private sector, the economy.

In keeping with the Civil Rights Act of 1964, the U.S. Government has long implemented an Equal Employment Opportunity policy that prohibits discrimination in federal government employment regardless of race, color, religion, gender, or sex. This has been interpreted in courts to cover sexual orientation and gender, and promotes the full realization of equal employment opportunity. This policy has evolved over the years, and there is a growing movement to pass legislation that would amend existing civil rights laws, including the Civil Rights Act, to provide explicit and nationally consistent anti-discrimination protections for sexual orientation and gender in key areas of life including employment, housing, credit, education, public services, and others.

The U.S. Mission in Italy employs hundreds of people in Rome, Florence, Milan, and Naples, and I am proud that we recognize the importance of supporting a diverse workforce.

The U.S. Mission in Italy is committed to promoting LGBTI rights and advance economic opportunities for all people. For the last several years, we have worked with civil society organizations in Italy to encourage programs advancing the rights of LGBTI community.

Last year, we hosted Randy Berry, the first-ever U.S. Special Envoy for the Human Rights of LGBTI persons, a position created by Secretary Kerry and President Obama to specifically support and promote the rights of LGBTI around the world. This position reflects an important evolution in the foreign policy of the United States.  I am proud to say that the United States is the first nation to name a special envoy for this issue. We also welcomed Justin Nelson, Co-Founder and President of the National Gay & Lesbian Chamber of Commerce, and facilitated the visit to Italy of Selisse Berry, Founder and CEO of Out & Equal Workplace Advocates. Both compellingly explained the correlation between promoting equal protections, tolerance and diversity and economic growth as it relates to entrepreneurship and the private sector.

Our Embassy and Consulates hung the Pride flag and our senior officials marched in Pride parades across the country this past summer.

In the United States, the July 2015 Supreme Court ruling bringing marriage equality to all U.S. states and territories was a historic victory in the human rights movement. And I commend Italy on passing its civil unions law, which was an important step forward and a real expansion of protections of the human rights of all Italians.

But we still have much work to do. LGBTI people still face discrimination in many aspects of their lives, in the United States and around the world.  In the workplace, we need to continue to support and implement effective and inclusive policies for LGBTI employees in order to retain their talent and help them reach their full potential.

Greater protection of human rights leads to greater stability, prosperity, tolerance and inclusivity. Protecting the rights of LGBTI people is an integral part of our human rights policy, of our foreign policy priorities, and our economic progress.

With this, I congratulate American Express and the other companies present here today for taking important and progressive steps towards creating an inclusive workplace. Together, we must continue to promote diversity and inclusion, and protect the human rights for all of our citizens.

We look forward to continuing our work with Italy to combat discrimination in all its forms.