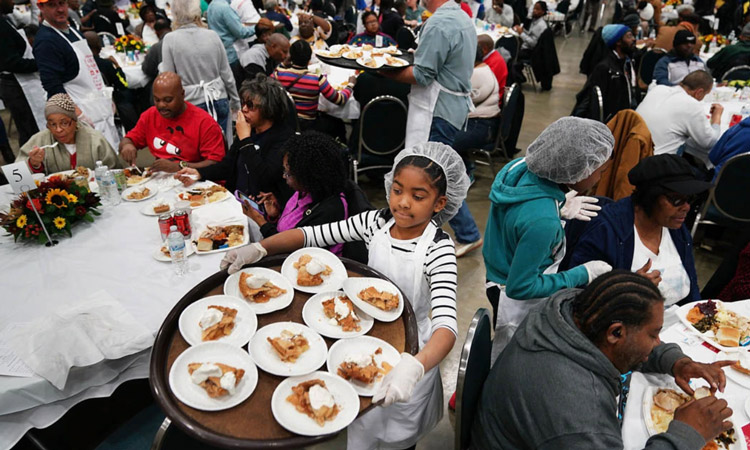 For the second recent year, charitable giving in the U.S. is at a record high.

The $485 billion in donations in 2021 is 4% higher than the record-setting $466 billion contributed in 2020. When adjusted for inflation, though, the levels are close, with 2021 just slightly lower than the year before.

The figures were reported recently by the Giving USA Foundation, using research from the Indiana University Lilly Family School of Philanthropy. The fact that Americans gave nearly half a trillion dollars per year in the past two years is particularly impressive, and important, because the pandemic hurt many people economically in the U.S. and around the world.

A culture of philanthropy

Amir Pasic, dean at the school of philanthropy at Indiana University, says Americans’ habit of banding together to solve problems through groups like charities was noted as far back as 1835 by the French observer of American life Alexis de Tocqueville.

Nonprofits’ largest sources of income are fees for service, such as museum entry tickets. Government funding ranks second. But third is philanthropy, with individual donations — including bequests — making up more than three-quarters of giving.

Pasic says the individual donations that many Americans make come with fewer strings than government aid, and that means philanthropic organizations can try innovative approaches to helping others.

“There’s a different cultural approach to philanthropy in the U.S.,” Pasic says. “We have a tax system that supports it; public institutions that celebrate it; and educational, social and cultural organizations that require it to thrive. It’s part of our expanded understanding of what it means to be American.”

Dale Bannon, a spokesman for the Salvation Army’s U.S. headquarters, agrees. The Christian charity provides drug rehabilitation and — after disasters — offers shelter, food and emergency aid to victims. The Salvation Army is the largest nongovernmental service provider in the United States.

Bannon says not all donors are wealthy. His organization is famous for red Christmas kettles with volunteers ringing bells to celebrate cash donations from passersby. “When you give to the Salvation Army, you are saving lives,” Bannon says. “We couldn’t do without donors — from the person who puts a dollar in the kettle to the person who gives a six- or seven-figure donation.”

The Salvation Army provided 300 million meals — three times its normal number — during the first 18 months of the pandemic. But the organization saw donations rise too: 2020 marked the largest fundraising level in history, followed closely by 2021.

The Giving USA report measures donations to nonprofit organizations, but as more of civic life moves online, more individuals help others without going through official nonprofits. They give to GoFundMe efforts or serve in small ways, by picking up groceries for an elderly neighbor or paying a housecleaner to stay home during COVID-19 surges, Pasic says. “That’s a wonderful expression of philanthropy — private action for public benefit.”

Those informal acts of charity are small but growing.

Other trends include increased giving to causes outside the U.S. and a growing number of community foundations, which raise money then consult with their communities on how best to spend it. (Community charities are growing internationally too.)

The world’s first community foundation in the world — launched in 1914, in the days of horse and buggies on downtown streets — is still going strong: the Cleveland Foundation.

Ginger Mlakar, general counsel of the Cleveland Foundation, says a secondary benefit of charitable giving is that it helps the donors. “People who give away their dollars through philanthropy and raise money are some of the happiest people you meet,” Mlakar says.