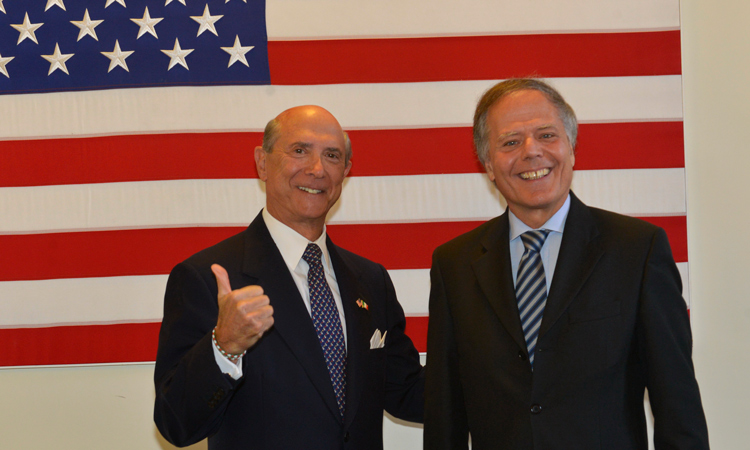 Thank you to the Center’s President, Gianni De Gennaro, for the opportunity to be here today.

And a special thanks to Director Paolo Messa and his staff, along with everyone at the Centro Studi Americani, for organizing this wonderful event.

One of the things I enjoy most about being Ambassador in Italy is that we can come together at places like CSA to debate mutual challenges. We can draw on experts like you, from both sides of the Atlantic, to collaborate on finding a path forward.

Thank you for your work – and thanks to all of you in the audience for joining this discussion.

The United States and Italy have a long history of cooperation. For decades, we have worked to promote a world that is more peaceful and prosperous.

Many of you understand that peace is impossible without a credible means to protect the nation. While Italy has rejected war as a means of resolving conflict, as a founding member of NATO, Italy has always been a core ally in keeping the peace since World War II—the longest period of peace among major European powers in centuries.

However, NATO is more than a military alliance. It draws its strength from shared values:  democracy, rule of law, and freedom.

NATO remains as important as ever. The Cold War is over, but new threats have arisen.  Terrorism, transnational criminal networks, unstable regimes on NATO’s periphery, hybrid warfare, and cyberattacks are all reminders NATO’s work is not done.

Russia—the topic of this forum—is the largest country on earth, with a rich culture, and the ability to help forge international consensus on many critical issues. NATO allies dialogue with Russia, and should continue doing so to advance our common goals.

Unlike NATO, however, Russia has shown its willingness to use coercion, deceit, and even land grabs to expand its influence and territory.

Today, President Trump’s National Security Strategy calls out Russia for eroding our collective security. The facts are clear:  The Russian government is engaged in a global campaign to undermine the sovereignty of other countries and violate their borders in defiance of international law.

We’ve seen Russia’s handiwork in the denial-of-service attacks in Estonia in 2007.

We’ve seen the Russian flag flying in Crimea, its bombs raining on Donbas, and its troops supporting Syria’s murderous regime.

In 1994, the newly independent country of Ukraine had the world’s third-largest stockpile of nuclear weapons. After talks with many countries—including Russia—Ukraine made the unprecedented decision to give up its nuclear weapons.

In exchange, Ukraine asked that we guarantee its borders. Russia signed that agreement.

Russia’s actions in Ukraine have been very, very costly.

The fighting in eastern Ukraine is the worst humanitarian crisis Europe has seen in decades.

It has killed over ten thousand people, so far – more than any conflict in Europe since the war in Bosnia.

We’ve also seen one and a half million people displaced, the most in Europe since World War II. That’s like the entire city of Milan being forced to flee as war consumes their homes, their jobs, and their hopes for the future.

The Russian government also continues to support the Assad regime despite its use of chemical weapons—which Russia promised to remove entirely, but has not.

The list goes on. The Russian government has tried to assassinate people who oppose it, as we’ve seen multiple times in the United Kingdom.

When Russia cannot prevail by force, it has waged destructive campaigns of disinformation, psychological manipulation, and coordinated cyberattacks that we now call hybrid warfare.

Hybrid warfare is used not to overwhelm us by force, but to weaken us by spreading confusion and creating chaos.

A divided Europe would be ideal for Russian objectives.

The Russian government is trying to create fractures in our societies—between nations, between races, between friends—even in Italy.

Some claim that sanctions on Russia are ineffective and harm the common man.

First, let me clarify a common misconception: Sanctions are not indiscriminate.  They are targeted.  They are targeted at Russia’s oligarchs – in the financial, energy, and defense sectors – and Putin’s inner circle.  People who are in a position to influence Russia’s malign behavior.  Not furniture manufacturers.  Not average Russians.

To those who claim sanctions hurt the Italian economy, recall that before sanctions Russia accounted for less than three percent of Italy’s global exports.

And the main reason Italy’s exports to Russia dropped in 2014 was not sanctions, or counter-sanctions, but a decline in global oil prices and a weak Russian economy.

It’s clear sanctions are affecting Russia’s calculations. It has not seized any more territory in Ukraine, and its leaders are pushing to have them lifted.

We need dialogue coupled with sanctions – a meaningful diplomatic tool – not only to persuade Russia to remove its troops from Ukraine, but to persuade it against future invasions. Aggression cannot be answered with meekness.  Words without action are not enough.

As Italians ponder the security of their borders, keep in mind Ukrainians and Georgians deserve safe borders, too, and they need our support. As long as Russian aggression continues in Ukraine, sanctions will remain relevant.

Loosening sanctions now would send the wrong message—that if Russia is patient, everyone will forget about its provocations, concede that the territory it occupies is a part of Russia, and return to business as usual.

This is not business as usual. We should not forget the ongoing hot war in the heart of Europe.  And we must continue to support the people of Ukraine, Georgia, and Syria.

Despite all these challenges, we remain hopeful.

We would much rather work with the Russians than be at odds with them.

Russia’s willingness to use its influence to bring about a fair, just, and speedy end to the suffering in Ukraine and Syria is crucial.

Despite our occasional differences, the United States and Europe have always shared a mutual desire for a free world.

We would like Russia to join us on that mission. Until it changes course, however, it cannot be trusted as an agent of peace.

Even though the challenges we’re facing today are great, we’re not helpless, and we’re not alone.

The United States is grateful that the transatlantic alliance – the greatest in history perhaps – remains strong. That is thanks to people like you, who share a vision for a better world. 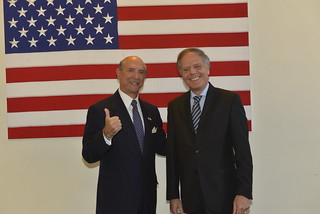