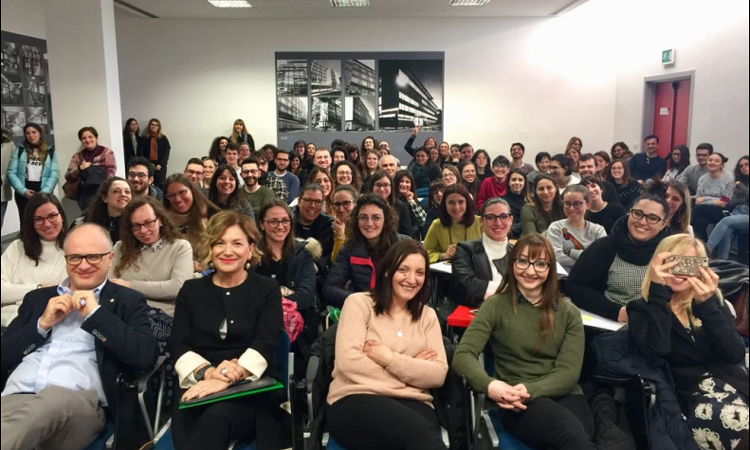 “AMAZING! Look how many students are here this morning attending the inauguration of the new #AmericanStudies course at the University of Bari! I am delighted that so many young men and women are interested in undertaking this course of study!”

Consul General Countryman tweeted this comment after joining Rector Antonio Uricchio in delivering remarks at the inauguration ceremony for a new American Studies course at the University of Bari “Aldo Moro”. Over 100 students and faculty from three departments attended the event and expressed enthusiasm about expanded American Studies offerings at the university. The new course is being offered within the national framework of the American Studies Initiative sponsored by Mission Italy in partnership with the Italian Association for North American Studies (AISNA) and the American Studies Center (CSA) to increase study opportunities in American literature, history, and foreign policy in Italian universities. The Bari edition of Corriere del Mezzogiorno highlighted the event with an article under the headline “American Studies Relaunched with U.S. Embassy Support.” Praise for the Embassy’s initiative was effusive: Rector Uricchio called it a “Mini Marshall Plan” for American Studies in Italy. Professor Lorena Carbonara related that she has already received several thesis requests in the subject matter – a true mark of abiding student interest in studying the United States.

The American Studies Initiative, launched in 2016, has introduced and financed new temporary adjunct professorships in American Studies in ten Italian universities, including the University of Bari “Aldo Moro.” The initiative, welcomed by the Italian Ministry of Education, also provides funds for the purchase of books and other materials to support the courses and integrate university libraries.