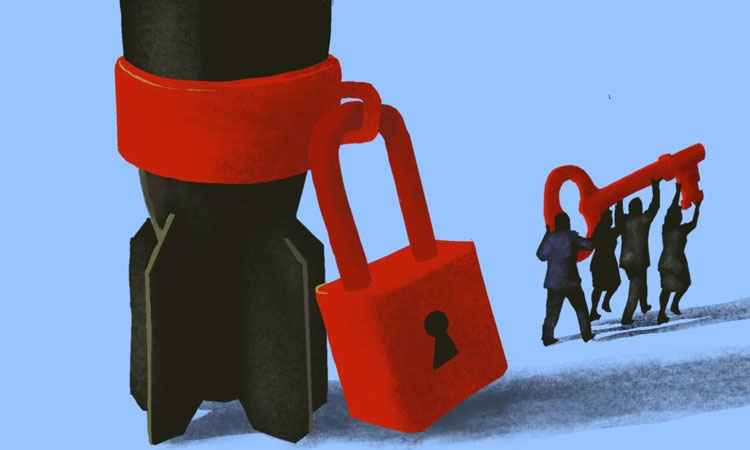 For more than 50 years, the Treaty on the Non-Proliferation of Nuclear Weapons (NPT) has helped prevent the spread of nuclear weapons, enabled progress on disarmament, and allowed peaceful nuclear technologies to contribute to global sustainable development.

The United States is committed to upholding this landmark treaty, one that is never more important than in times of crisis.

Ambassador Adam Scheinman, the president’s special representative for nuclear nonproliferation, has made it clear the continued success of the NPT depends on the collective and sustained efforts of all parties to the treaty.

At the Tenth NPT Review Conference, August 1–26 in New York, the United States will urge NPT partners to work together to strengthen the NPT’s core pillars of nonproliferation, disarmament and promotion of peaceful uses of nuclear technology.

“Together, we must use this as an opportunity to address today’s most pressing nuclear challenges, further new opportunities to expand the treaty’s benefits, and reaffirm our commitment to advancing nuclear disarmament,” Scheinman said in a July 21 blog post.

This year’s conference presents an opportunity for parties to show their commitment to nuclear nonproliferation in a time of crisis, when Russia is pursuing an unjustified war in Ukraine, as well as dangerous actions and escalatory rhetoric, Scheinman says.

The NPT, which entered into force March 5, 1970, is the fundamental internationally binding agreement aimed at curbing nuclear proliferation and has the broadest support of any nuclear-related treaty in history.

Countries that are party to the NPT meet every five years to assess its implementation. The Tenth NPT Review Conference, originally scheduled for 2020, was postponed because of the COVID-19 pandemic.

At the conference, the U.S. delegation will work with partners to preserve the NPT for future generations by:

The United States is a leader in arms control and is committed to making the world safer.

Since the NPT was negotiated at the height of the Cold War, the United States has reduced its nuclear weapons by 88%, according to the latest official release of U.S. stockpile data. Global stockpiles have fallen by more than 80% since their peak in 1986, according to the Federation of American Scientists, which tracks global security issues.

At the conference, the United States also will promote new ways to advance access to peaceful uses of nuclear technology, which can produce clean power, treat cancer, purify drinking water and increase crop yields — including a new initiative with the United Kingdom called the “Sustained Dialogue on Peaceful Uses.”

Since 2015, the United States has provided more than $395 million for IAEA programs supporting peaceful uses of nuclear technology. In November 2020, it pledged an additional $50 million over the next five years for the IAEA’s Peaceful Uses Initiative.

“The United States stands ready to work with all partners to ensure a safer and more prosperous world for everyone,” Scheinman says in his blog. “None of us can afford to do any less.”