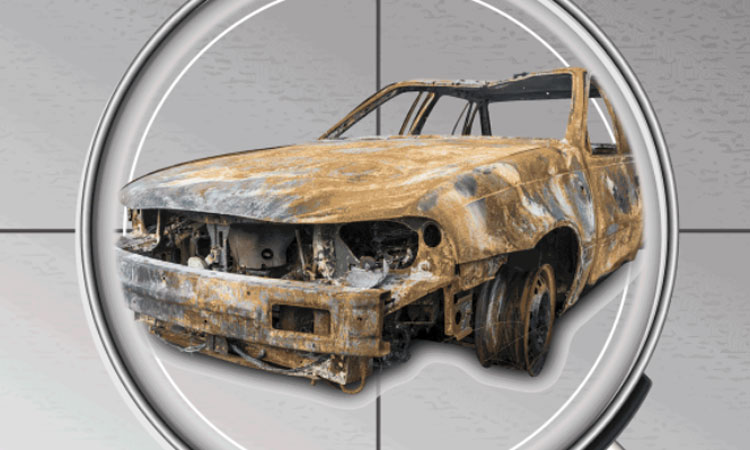 The Kremlin is claiming the atrocities committed by Russian forces in Bucha, Ukraine — documented by satellite imagery — were a provocation staged by the West. Here’s what a staged provocation really looks like.

The Kremlin has ramped up its disinformation campaign since Russia began its unprovoked war with Ukraine, but there were plenty of false claims leading up to it.

One video was so suspicious — and so gruesome — that it drew scrutiny from Bellingcat, a Netherlands-based investigative journalism group that specializes in fact-checking and open-source intelligence.

The incident in question allegedly took place on a highway between Donetsk and Horlivka on February 22 at approximately 5 a.m. local time. An improvised explosive device (IED) was reported to have detonated on the highway, destroying a van and a car.

The video showed three charred bodies from two vehicles, apparently from a roadside bomb, in the Donbas region, which Russia-backed forces have controlled since 2014, when Russia first invaded Ukraine.

Vladimir Putin loyalists and pro-Kremlin media reported that Ukrainian armed forces were behind the alleged IED and targeted a military commander affiliated with the so-called Donetsk People’s Republic (DNR) in eastern Ukraine.

Among those posting the images on social media and the claim: the state-controlled daily newspaper Izvestiya and the pro-Kremlin DNR People’s Militia.

Bellingcat relied on an explosive weapons expert and a forensic pathologist during its investigation, and what they saw didn’t add up.

“In my opinion the images do not represent credible scenario,” Chris Cobb-Smith, an explosive weapons expert and director of Chiron Resources, told Bellingcat. “I believe the incident has been manufactured to give the appearance of an IED blast in which three individuals died.”

The injuries to the skulls also appeared inconsistent with an IED blast. The skull of one of the bodies appeared to have clear cuts on both sides of the head, cleanly separating the skull cap from the rest of the skull.

Bellingcat looked at open sources and discovered these cuts are more consistent with a procedure carried out during an autopsy. The organization asked Lawrence Owens with the University of Winchester in England to analyze the images. He concluded the people were already deceased before their bodies were placed in the vehicles.

Bellingcat’s final report concludes that the incident involved “the staged use of cadavers and likely faked IED damage.”

The bottom line: the Kremlin used a fake story about a fake IED that didn’t kill anyone to drum up support back in Russia for a war it provoked. The war has killed more than 1,600 civilians and injured more than 2,000 since it was launched more than a month ago.