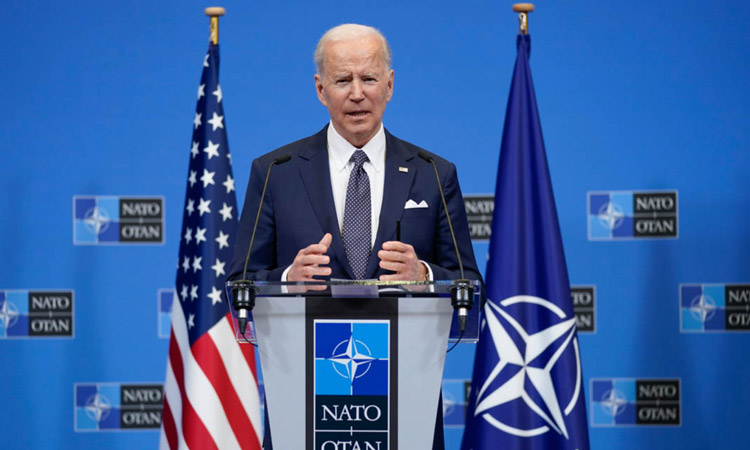 During his first trip to Europe since Russia’s forces further invaded Ukraine, Biden announced more than $1 billion in additional U.S. humanitarian assistance for those affected by Vladimir Putin’s war. He also unveiled new measures to hold the Russian Federation leadership and its enablers accountable for atrocities in Ukraine.

“Putin was banking on NATO being split,” the president said. “NATO has never, never been more united than it is today.”

The president made his remarks in Brussels on March 24, one month after Russia began what Biden called “its carnage in Ukraine” and following a meeting with NATO leaders. He later met with members of the Group of Seven (G7) industrialized nations and the European Council before heading to Poland.

“We are determined to continue to impose costs on Russia to bring about the end of this brutal war,” NATO Secretary General Jens Stoltenberg said.

President Biden announced new rounds of aid to Ukraine and its neighbors, including:

On March 23, Secretary Blinken announced that, “based on information currently available, the U.S. government assesses that members of Russia’s forces have committed war crimes  in Ukraine.” He underscored that the United States “is committed to pursuing accountability using every tool available, including criminal prosecutions.

“Every day that Russia’s forces continue their brutal attacks, the number of innocent civilians killed and wounded, including women and children, climbs,” Blinken said.

In coordination with the European Union and the G7, Biden also announced that the United States imposed sanctions on over 400 Russian elites, Duma members and defense companies. This was in addition to earlier U.S. actions and actions from other countries to hold Russia accountable, including sanctions and export controls.