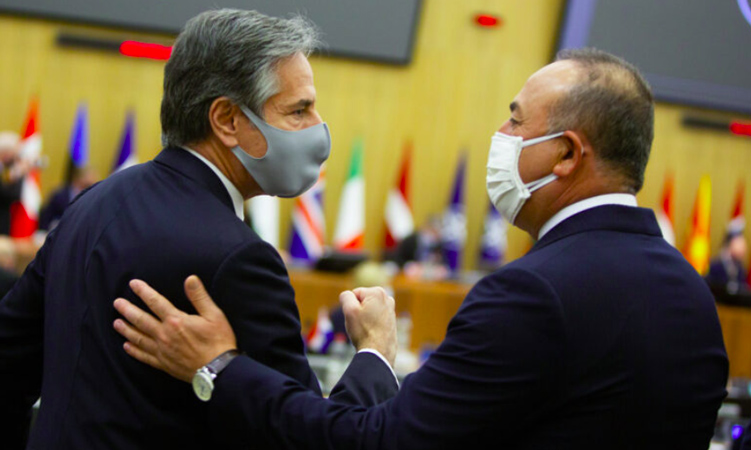 At the outset of the meeting of NATO foreign ministers on March 23-24 in Brussels, Blinken said the United States and NATO member countries share a common vision of democracy, freedom and a rules-based international order.

“I’ve come here to express the United States’ steadfast commitment to that alliance, which has been the cornerstone of peace, prosperity, stability for the transatlantic community, for more than 70 years,” Blinken said at the outset of the March 23 meeting.

A revitalized NATO is necessary to ensure the alliance continues its success, Blinken said. He supported the alliance’s NATO 2030 initiative to adapt to and deter and defend against all future threats.

NATO Secretary General Jens Stoltenberg said NATO allies must jointly face challenges, including cyberthreats, terrorism and climate change, as well as the destabilizing activities of Russia and the People’s Republic of China.

Stoltenberg also said NATO is broadening its security agenda to include reliable energy grids, fifth-generation telecommunications networks and other infrastructure to maintain a technological edge and prepare for the impacts of climate change.

“No ally and no continent can deal with all of these challenges alone,” Stoltenberg said. “We need Europe and North America together.”

Beijing’s malign behavior includes human rights violations against Uyghur and other Muslim minorities in Xinjiang, threats to democratic processes in Hong Kong, aggression toward Taiwan, threats to Tibetan culture and religion, and violations of sovereignty and economic coercion of nations.

The PRC is also investing in strategic infrastructure in Europe, while building up its military and expanding its footprint in areas that directly affect trans-Atlantic security, including the Middle East and Africa, the State Department stated in a fact sheet.

The United States and its NATO allies are also leading in the fight against COVID-19. NATO has played a pivotal role in the civilian response to the pandemic, establishing a trust fund for the purchase of a stockpile of medical supplies, airlifting hundreds of tons of supplies around the world and building almost 100 field hospitals.