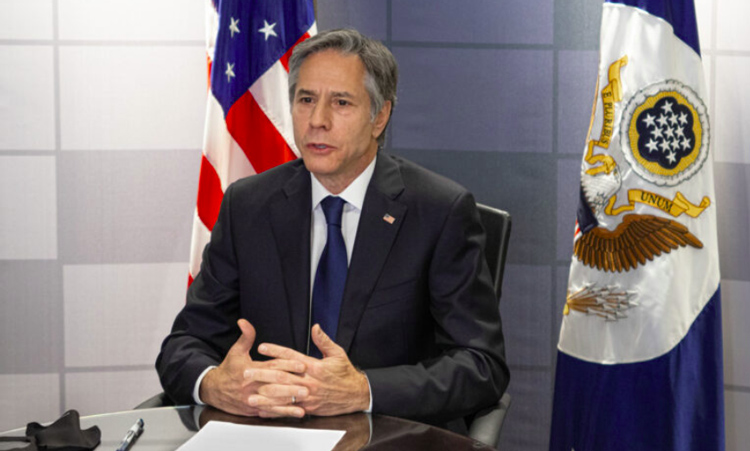 Secretary of State Antony J. Blinken participates in the U.N. Security Council open debate on multilateralism, from Washington, on May 7. (State Dept./Freddie Everett)

Secretary of State Antony J. Blinken says the United States will work with other nations to uphold the rules and values that support international peace and cooperation.

In May 7 remarks to the U.N. Security Council, Blinken defended a rules-based international order that ushered in the most peaceful and prosperous era in modern history and remains essential to meeting modern problems.

“Multilateralism is still our best tool for tackling big global challenges,” Blinken said in an intervention delivered as the People’s Republic of China (PRC) began its one-month tenure as president of the Security Council.

“The United States will spare no effort to find and stand on that common ground with any country that upholds its commitment to the order we founded together, and which we must defend and revitalize together,” he added.

The founding of the U.N. after World War II was based on common principles to prevent conflict, maintain dialogue and build a system to benefit all nations. “It was enlightened self-interest,” Blinken said. “We believed other nations’ success was critical to ours.”

That rules-based order is also vital to addressing rising nationalism and repression around the world and tackling the COVID-19 pandemic and the climate crisis, Blinken said.

Upholding that order requires that all countries comply with their international agreements, respect the sovereignty of other nations and uphold human rights, Blinken said. He countered claims that what governments do within their own borders is their business.

“Human rights and dignity must stay at the core of the international order,” Blinken said. “The Universal Declaration of Human Rights begins with the word ‘universal’ because our nations agreed that there are certain rights to which every person, everywhere, is entitled.”

Blinken’s defense of a rules-based international order comes as Group of Seven (G7) nations, in a May 5 communiqué, faulted Russia’s military buildup along the border with Ukraine and called on the PRC to respect human rights and fundamental freedoms.

“We continue to be deeply concerned about human rights violations and abuses in Xinjiang and in Tibet, especially the targeting of Uyghurs,” the G7 said, citing “political re-education” camps in Xinjiang and reports of forced labor and sterilization. “We strongly support independent and unfettered access to Xinjiang to investigate the situation on the ground.”

The G7 nations are the United States, Canada, France, Germany, Italy, Japan and the United Kingdom. The high representative of the European Union also joined the communiqué.