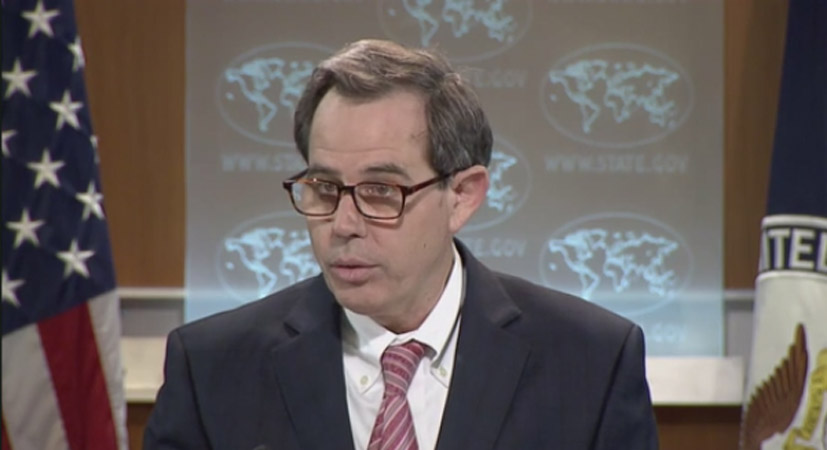 MS NAUERT: It’s great to see you. Thanks, everyone, for assembling here so quickly today. Welcome to the State Department. We asked you here to provide you with some new information on the six-year crisis in Syria. I’m joined today by Acting Assistant Secretary for the Bureau of Near Eastern Affairs Stuart Jones. Stuart recently returned from the talks in Astana. He’ll give us an update and also provide you with some newly declassified information on Syria today.

Last week, Secretary Tillerson met with Russian Foreign Minister Sergey Lavrov for more than an hour here in Washington. You’ve read the readout from that meeting, but I’d like to provide you with some additional context and details coming out of that meeting today.

Secretary Tillerson was firm and clear with Minister Lavrov: Russia holds tremendous influence over Bashar al-Assad. A key point that took place in that bilateral meeting was telling Russia to use its power to rein in the regime. Simply put, the killing and devastation has gone on for far too long in Syria. Minister Lavrov was clear as well that he shares the same goals as the United States does in Syria: a unified and stable nation. Both men agreed that the way to bring stability to Syria must come through diplomatic and political means.

We call upon Russia to use its influence with the Assad regime to get it to adhere to a lasting negotiated ceasefire. That ceasefire, we believe, will reduce violence and also ensure unhindered humanitarian access and stop the indiscriminate killings of civilians. These actions will help create the conditions on the ground for a political resolution of that conflict.

And with that, I’ll turn it over to Acting Assistant Secretary Stuart Jones. He will take your questions at the end. Thank you.

MR JONES: Thank you, Heather. Good morning. Thank you for being here this morning. Since Syria’s civil conflict began in 2011, the Assad regime has treated opposition forces and unarmed civilians as one and the same, committing widespread violations of international law, including the Law of Armed Conflict and Human Rights law. Today, we are releasing newly declassified reporting and photos that underscore the depths to which the Syrian regime has gone with the continuing support of its allies Russia and Iran.

The facts we’re presenting today are based on reporting from international and local nongovernmental organizations, press reporting, and also Intelligence Community assessments. The continued brutality of the Assad regime, including its use of chemical weapons, presents a clear threat to regional stability and security as well as to the national security interests of the United States and our allies.

According to the United Nations and credible human rights organizations, the Syrian civil war has claimed more than 400,000 lives, many of which were civilians. The Assad regime’s actions include well-documented airstrikes and artillery strikes; chemical weapons attacks; arbitrary arrests; extrajudicial killings; starvation; sexual violence; and denial of essential services such as food, water, and medical care to the civilian population.

In addition to airstrikes, the regime continues to systematically abduct and torture civilian detainees, often beating, electrocuting, and raping these victims. A former regime photo-documentarian working under the name Caesar has shared more than 10,000 photos of Assad’s victims with the international community. According to numerous NGOs, the regime has abducted and detained between 65,000 and 117,000 people between 2011 and 2015[1].

Moreover, the regime has also authorized the extrajudicial killings of thousands of detainees using mass hangings at the Saydnaya military prison. Saydnaya is a 45-minute drive outside of Damascus and is one of Syria’s largest and most secure prison complexes. Saydnaya is but one of many detention facilities where prisoners are being held and abused. Others include the Mezzeh airport detention facility and Military Security Branches 215, 227, 235, 248, and 291, which are all located throughout Syria.

The regime holds as many as 70 prisoners in Saydnaya in cells that have a five-person capacity. And according to multiple sources, the regime is responsible for killing as many as 50 detainees per day at Saydnaya. Credible sources have believed that many of the bodies have been disposed in mass graves. We now believe that the Syrian regime has installed a crematorium in the Saydnaya prison complex which could dispose of detainees’ remains with little evidence.

Beginning in 2013, the Syrian regime modified a building within the Saydnaya complex to support what we believe is a crematorium, as shown in the photos that we have distributed to you. Although the regime’s many atrocities are well documented, we believe that the building of a crematorium is an effort to cover up the extent of mass murders taking place in Saydnaya prison.

The United States is on record, has stated many times, that we are appalled by the atrocities that have been carried out by the Syrian regime. And these atrocities have been carried out seemingly with the unconditional support from Russia and Iran. Two weeks ago, as Heather said, I attended the Astana conference in Kazakhstan as the U.S. observer. At that meeting – led by Turkey, Russia, and Iran, the guarantors of the Astana process – it was agreed to create de-escalation zones that would reduce violence and save lives.

In light of the failures of the past ceasefire agreements, we have reason to be skeptical. The regime must stop all attacks on civilians and opposition forces, and Russia must bear responsibility to ensure regime compliance. Russia joined the unanimous UN Security Council Resolution 2254, which demands that all parties immediately cease any tacks – any attacks against civilians. Russia has either aided in or passively looked away as the regime has conducted an airstrike against a UN convoy, destroyed east Aleppo, and used chemical weapons, including sarin, against civilians in Idlib province on April 4th.

During his visit here last week, Foreign Minister Lavrov acknowledged that there is no military solution to the Syrian conflict. Russia must now with great urgency exercise its influence over the Syrian regime to guarantee that horrific violations stop now.

So with that, I’ll take your questions. Thank you very much.

QUESTION: Thank you. Two things. One, are you suggesting that Russia and/or Iran have anything to do with this crematorium?

QUESTION: No, okay. And then secondly, do you have any idea how many – you said thousands, mass hangings – how many of the bodies are being disposed of in mass graves or – and how many are being burned?

MR JONES: No. So you’re familiar with the Amnesty International report which projected that as many – between 5- and 11,000 people had been killed in Saydnaya between 2011 and 2015[2].

MR JONES: So that gives you some idea of what the —

MR JONES: And then there’s other – other data which suggests as many as 50 murders a day coming out of the complex.

MR JONES: So I don’t know. But so – but our – what we’re project – what we’re assessing is that if you have that level of production of mass murder, then using the crematorium would help – would allow the regime to manage that number of corpses coming out of the prison complex.

MR JONES: And without evidence.

QUESTION: Thank you very much for doing this. Two questions for you. One, do you have any status update on the Americans, Austin Tice or others, who may be held or believed to be held by the regime? And if there’s any connection here, please tell me. And secondly, you talked about the conversations with Lavrov – again the case made that Russia is aiding and abetting here. Did the Secretary walk away with any kind of agreement from his meeting or any kind of achievement to have them say they’re willing to step back? They’ve been telling multiple secretaries of state for some time they’re not wedded to the Assad regime.

MR JONES: So on the issue of the U.S. hostages, no, we don’t see a connection between U.S. hostages and what we’re talking about what’s going on here at Saydnaya prison.

On the issue of the conversation between the Secretary and Foreign Minister Lavrov, there was productive conversations between the Secretary and the foreign minister. They talked about a way forward on Syria. And the president – and sorry, the Secretary acknowledged that the state of the relationship between Russia and the United States is at a low point. Syria is one of the factors where we would like to see the relations improve, but I would not say that they mapped out a specific way forward on how to address the issue of Syrian atrocities or even how to move forward on the Geneva process. Though of course we’re participating in the Geneva process, we support the Geneva process, we believe that in addition to achieving a ceasefire in Syria and cessation of hostilities that the political process needs to follow.

QUESTION: What made it productive, then?

QUESTION: Hi, thank you for doing this. Have you presented Russia with this visual evidence? Have you asked them to take any actions and/or gotten any response from them?

MR JONES: So we have a – we have not presented this particular – I have not presented this particular evidence to the Russians, but we have an ongoing conversation with the Russians talking about the problem that their failure to condemn Syrian atrocities and their apparent tolerance of Syrian atrocities has created, and we have urged the regime – we have urged the Russian Government to hold the regime responsible for these atrocities.

QUESTION: Doesn’t this or does this make the case, or is there a consideration of military action to destroy crematorium, some of this apparatus here?

MR JONES: As the President said, we’re not going to signal what we are going to do and what we’re not going to do. At this point we are talking about this evidence and bringing it forward to the international community, which we hope will put pressure on the regime to change its behavior.

QUESTION: Can I just – one very – extremely briefly? What makes you so sure that this is a crematorium and not just some other building? Is it this thing with the snowmelt? Because, I mean, people are going to look at this – the regime in particular or – and the Russians, who you’re – are going to look at this and say: Well, all this proves is that there is a building there and that that part where there’s – snow is melted is simply warmer than the rest of the building. It looks —

MR JONES: So if you look – so obviously, these photos date over several years from 2013 to 2017. If you look at the earliest photo, the August 13 photo, this is during the construction phase, and these HVAC facilities, the discharge stack, the probable firewall, the probable air intake, this is in the construction phase. This would be consistent if they were building a crematorium.

Then we look at the January 15 and we’re looking at snowmelt on the roof that would be consistent with a crematorium. So —

QUESTION: Or just a warmer part of a building, right?

QUESTION: If Russia refuses to do anything about this, what’s next?

QUESTION: Can I just follow up briefly on that there? You said this evidence dates back – well, you had been built up over four years, 2013, 2017. Did this intelligence just become concrete recently and is that why you’re releasing it today? Or are you releasing it today with the hope of a political effect?

MR JONES: I would say that this information has been developing, and with the meeting last week between the Foreign Minister Lavrov and the Secretary, this was an opportune time to remind people about the atrocities that are being carried out inside of Syria all the time, of which this is one discrete additive piece of evidence.

MS NAUERT: Thank you, everyone.

QUESTION: — on ending the attacks against the opposition, does that include ISIS and al-Nusrah?