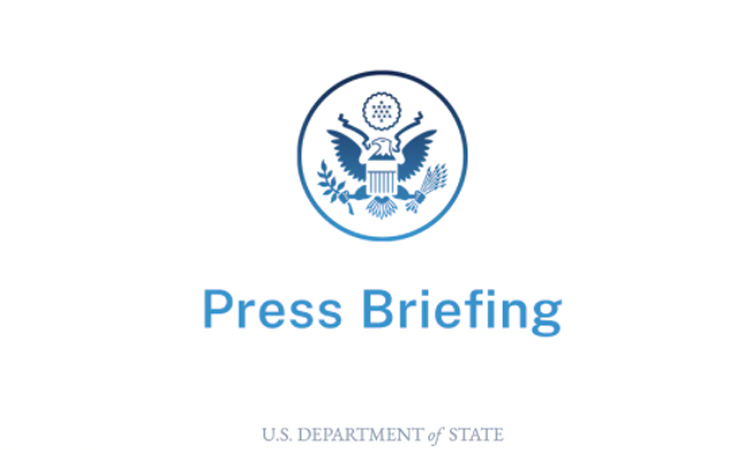 Special Briefing
Office of the Spokesperson

But [Senior State Department Official], why don’t I turn it over to you, if you want to give a little context on what the Secretary did and what we’ve found.

SENIOR STATE DEPARTMENT OFFICIAL:  Great.  Thanks, [Moderator].  Well, it was obviously a busy day, but just a terrific day, a very warm return to an in-person ministerial.  As you know, it’s been quite some time since the NATO foreign ministers were able to get together.  This was, of course, Secretary Blinken’s first visit in his capacity as Secretary to Brussels, to NATO, and to the new headquarters of NATO.

He started out today, this morning, meeting with the secretary general, just to review the ministerial ahead.  They obviously had a chance to have conversations as the secretary general did also with the President in the first weeks of the administration.  You saw, of course, the press availability they did together, so I won’t rehash that.  And then they had a session and engagement to talk a little more about NATO and why the alliance is there.

The real focus was on revitalizing.  As the Secretary’s made very clear, he’s focused on repairing, revitalizing, and looking at how we can make the alliance stronger.  The alliance, of course, after 72 years is doing extremely well.  And one of the things they looked at today was how it can adapt itself even further for the future with the NATO 2030 recommendations that the secretary general has made based on the report that you’ve probably all seen, the public version of that report, after the forward-looking review process that was held last year.

So the Secretary participated in two very fulsome sessions of the ministerial.  The first one, of course, looked at Afghanistan.  You’ve heard his answers on that.  He was here, as the President asked him to do, to listen, to hear.  No decision has been taken, as you know.  But it was an important opportunity for all of the allies to express their views.  There’s a great deal of unity about our policy all along, which has been in together, adjust together, out together at the appropriate time.  And so there was strong support there.

The warmness in the room was really quite noticeable.  A number of the ministers commenting how good it was to hear the strong commitment to NATO and the work that we’re doing.  Having the United States back, as we’ve put it, was welcomed by all.  And this was, of course, the first time that we actually had a live ministerial with 30 countries, given that last year North Macedonia joined the alliance during the pandemic.

So the second session then focused on the 2030 ideas and how we’ll move that forward, the idea of holding a summit at a date yet to be fully defined.  And I won’t go into too much more detail, because we’ll finish the summit with tomorrow morning’s session, and then you’ll get the full readouts and a press conference after that.

And then just to follow up on the rest of the day, the Secretary had an opportunity to meet with the foreign ministers from the Visegrad Four countries.  That, of course, is the Czech Republic, Slovakia, Poland, and Hungary, just to hear from them, their perspectives on the alliance and then indeed – I should have mentioned he started the day actually with a bilateral meeting with Foreign Minister Luigi Di Maio of Italy, the first time they’ve had a chance to meet in person.  They discussed a whole range of bilateral issues.  Italy, of course, a major – an important ally, very involved in Afghanistan and other NATO things, one of our oldest allies.

And then later this evening he was able to have a meeting with the Quad, as we know it here on this side – that is, with Germany, the UK, and France – just to review a whole series of issues, including the ongoing discussions here at the ministerial, and then a pull-aside at the end of the night with the German foreign minister – again, first opportunity to see these people and meet in person, live.  And it really reminds you how important that kind of personal engagement is, even if we’re following social distancing and masks and other COVID protocols.

MODERATOR:  Great.  I think we’ll have – you’ll – you have a chance to hear directly from the Secretary tomorrow during his press conference, but let’s try and take a question or two.  Operator, would you like to go to the first question?

OPERATOR:  Sure.  Our first question will be from Jennifer Hansler.  Please, go ahead.  One second, please.  Your line is open.

QUESTION:  Thank you.  Thanks for doing this.  Couple questions on the E3 meeting.  Was there any sort of plan B developed with regard to Iran on how to proceed, given their, at this point, rebuffing diplomatic efforts?

With the German foreign minister, how much did Nord Stream factor into that conversation?

And then if I could quickly, we have some sources who are saying a decision on Afghanistan could come as soon as tomorrow.  Excuse me.  Can you confirm that?

SENIOR STATE DEPARTMENT OFFICIAL:  I can’t do that for you on your last question.  On Iran, it was one of the topics that the E3+1 discussed, but I don’t have any details or additional things to share at this point.  And on your first – your other question had to do with the German foreign minister.  Indeed, the Secretary, of course, repeated our position on Nord Stream 2, as reflected in the statement he put out last week, and so, again, nothing else to share on that either.

MODERATOR:  We’ll take the next question.

OPERATOR:  Next we’ll go to Teri Schultz.  Please, go ahead.  Your line is open.

QUESTION:  Jennifer had great questions and took all of mine, but can we not talk a little bit more about Iran?  Obviously that’s the setting for it with the E3.  What is the next step?  The Europeans are kind of waiting for the U.S. and Iran says it won’t until you make a move on sanctions, so where – what did the conversation consist of, really?  Thank you.

MODERATOR:  Hey, Teri.  Well – this is [Moderator] – as you know, it was several weeks ago now that we made clear in the aftermath of a Quad meeting – or, as I think we called it, an E3+1 meeting at the time – that we made clear that were the EU to put forward an invitation, we would be willing to accept that invitation.  I think it was – it’s fair to say that at the meeting today it was recognized that we are – we see this as – through a common lens.  We also note the need to continue to coordinate closely on this.  I think, as we have always said, we know that when we approach this challenge together with our European partners – so the E3 in this case – we will be in a much stronger position.  I think that was recognized by all sides.

I wouldn’t – I think that it was a – there was a broad recognition that we’re waiting for the proposal that the Iranians themselves had said is in the works.  And when that proposal comes, I think together with our European partners, we will coordinate next steps.  But right now the ball is in Tehran’s court.

We’ll go to the next question.

OPERATOR:  Next we’ll go to the line of Steven Erlanger.  Please, go ahead.  Your line is open.

QUESTION:  Hello.  Can you hear me okay?

MODERATOR:  We’ve got you.  Go ahead.

QUESTION:  Hello?  All right, fine.  I was – yeah.  Look, I was going to ask you, quite simply, are there conversations going on with Germany to settle Nord Stream 2 in a sensible way, as opposed to just using rhetoric that actually doesn’t push the problem any farther?  You have waivers in the law; you have a German Government that wants to get this settled.  Is there a conversation going on, or are you just talking about how terrible it is?  Thank you.

SENIOR STATE DEPARTMENT OFFICIAL:  In tonight’s conversation, the Secretary made clear and repeated again what was in his statement: the facts of our law, that this is a bad deal that we oppose and have always opposed it, and the situation we face.  That was really what he laid out in what was a relatively short meeting, and obviously covered several other topics, including Afghanistan.

MODERATOR:  Thanks, Steve.  We’re actually now approaching our stop, so we’re going to have to end this here, I’m afraid.  But as I mentioned, the Secretary – we will – we are planning at least to have a press conference tomorrow, and I think the Secretary will have a chance to take your questions then.  We just wanted an opportunity to give you a little more context and color from the day.  But we look forward to seeing you in person tomorrow, and thanks for your time this evening.