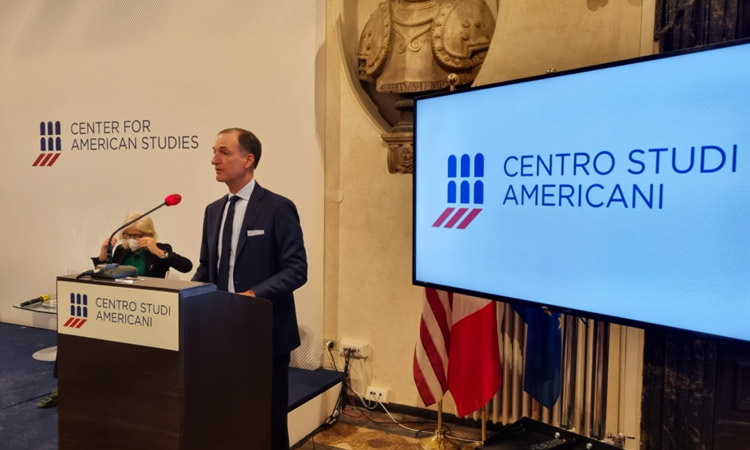 Thank you to our friends at the Centro Studi Americani, the Aspen Institute, and the European Council on Foreign Relations for the invitation to contribute to today’s discussion. It’s an honor to be here with President De Gennaro and my fellow distinguished speakers, Ambassador Terracciano and President Tremonti. This is a very timely conference, given the ongoing developments with Russia and Ukraine. Without question, the issues before us are of great importance; they concern peace and security in Europe, but also such broader questions as respect for international borders.

Let me first focus on what President Biden said when he met President Putin in Geneva last June — that the United States seeks a stable, predictable relationship with Russia. That includes a relationship where the United States and Russia can find common ground – as P5 members at the UN, in addressing the climate crisis, in dealing with a range of Arctic issues, and in creating strategic stability.

This is why taking a broader look at Russia in forums like this one today is important, and it’s in that spirit that we have consistently spoken of the two paths Russia can choose in the current crisis over Ukraine: dialogue and diplomacy, or further escalation. Over the past weeks, the United States has made genuine and sincere efforts to pursue the former, which we vastly prefer.

As recently as Monday night, when President Biden spoke with European leaders including Prime Minister Draghi, we have continuously engaged with our  Allies and partners to ensure that all of us speak with one voice in our defense of Europe’s security and Ukraine’s sovereignty. Italy is an important transatlantic partner and ally and has been critical to these discussions, in every format: at NATO, at the OSCE, with the G7, and with the EU. We are united in adhering to the principle that in charting the path forward there should be nothing about Europe without Europe, nothing about NATO without NATO, and nothing about Ukraine without Ukraine. You’ve seen that mantra in action.

The United States and Allies and partners have been firm in pushing back on some of Russia’s proposals that we believe run counter to international law and NATO’s founding principles. We will not allow anyone to slam closed NATO’s “Open Door” policy, which has always been central to the Alliance. Ukraine’s foreign policy is for its citizens to decide, not Vladimir Putin.

But as Secretary Blinken indicated recently, what this crisis is about, at its core, is Russia’s rejection of a post-Cold War Europe that is whole and free. It is about Russia turning away from agreements that have kept the peace across the continent for decades, taking aim at NATO and at the governing principles of international peace, security, and democracy that we all have a stake in defending.

To allow Russia to violate those principles with impunity would drag us all back to a much more dangerous and unstable time and send a message to others around the world that these principles are expendable.

Collectively, we have put some ideas on the table regarding areas for potential progress if Moscow were to de-escalate, because meaningful progress can only happen in an environment of de-escalation.

So far, senior Russian officials have taken the exact opposite approach; they have continued to escalate. Russia has amassed more than 100,000 troops on Ukraine’s borders. And we see Russia’s leaders laying the groundwork to fabricate a pretext for invasion, including through sabotage and disinformation. There are other troubling signs, including the movement of troops into Belarus, which borders both Russia and Ukraine. We are now at a stage where Russia could, at any point, launch an invasion of Ukraine.

We want peace. We are committed to diplomacy, and we have made clear that the diplomatic path provides the only durable solution to the security concerns of Russia, the United States, and Europe.

However, if Russia rejects diplomacy and further violates Ukrainian territorial integrity, we will be fully aligned with Italy and our other partners and allies to impose severe costs on Russia, including severe economic sanctions packages. Together with our allies and partners, we would respond with strong economic measures that would inflict significant costs on the Russian economy and financial system. And we would reinforce our NATO Allies on the eastern flank, to whom we have a sacred obligation, with an additional troop presence as the President said on January 19.

We still have an opportunity to build a predictable, constructive relationship – one that is not based on crisis and hostility – if Putin chooses that path.

Thank you again for having me today, and for organizing this very important and timely discussion.