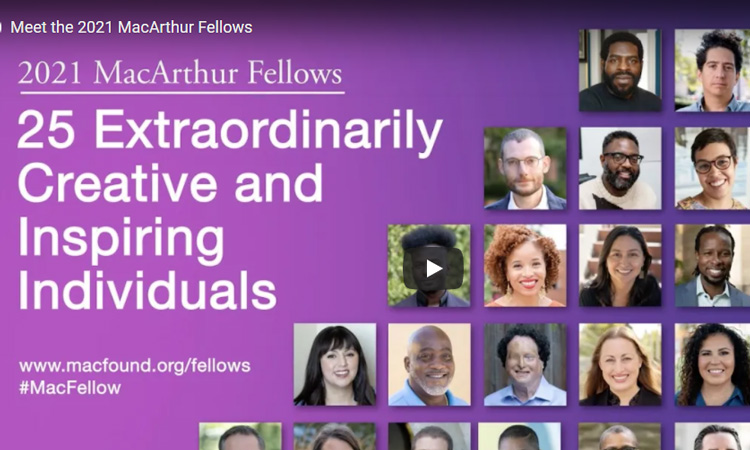 A technology designer, a landscape ecologist and a radio producer for Spanish-speaking communities in the Americas are among the 25 recipients of the 2021 MacArthur Foundation fellowships, often called “genius grants.”

“As we emerge from the shadows of the past two years, this class of 25 fellows helps us reimagine what’s possible,” said Cecilia Conrad, the program’s managing director. “They demonstrate that creativity has no boundaries.”

Celebrating its 40th anniversary, the program supports talented individuals in the arts, advocacy, history, literature and science. The winners were chosen based upon their record of accomplishments and a strong potential for future achievement.

The fellowship includes a $625,000 reward with no conditions. Winners are not required to complete a specific project or produce a report.

The Chicago-based John D. and Catherine T. MacArthur Foundation’s fellowships are widely known as “genius grants,” although the foundation avoids the term. It says the fellows have many qualities, including a willingness to take risks and persistence in the face of personal and conceptual obstacles.

Many grant winners address current social or environmental problems to “build back from the ground up,” according to Marlies Carruth, the program’s director.

Meet a few of the 2021 MacArthur fellows:

Daniel Alarcón, a writer and radio producer, chronicles the social and cultural ties that connect Spanish-speaking communities across the Americas.

Jacqueline Stewart, a film scholar, draws attention to the contributions that overlooked Black filmmakers have made to cinema’s development as an art form.

Joshua Miele, a technology designer, develops devices for blind and visually impaired individuals to use, such as tactile street maps.

The selection process is confidential, as nominations are made by a third party. The winners learned about their award by telephone and had been unaware of their nomination.

Grant winners must be U.S. citizens or reside in the U.S. Since 1981, 1,061 individuals have won the award. Read more about the other fellows on the MacArthur Fellows site.