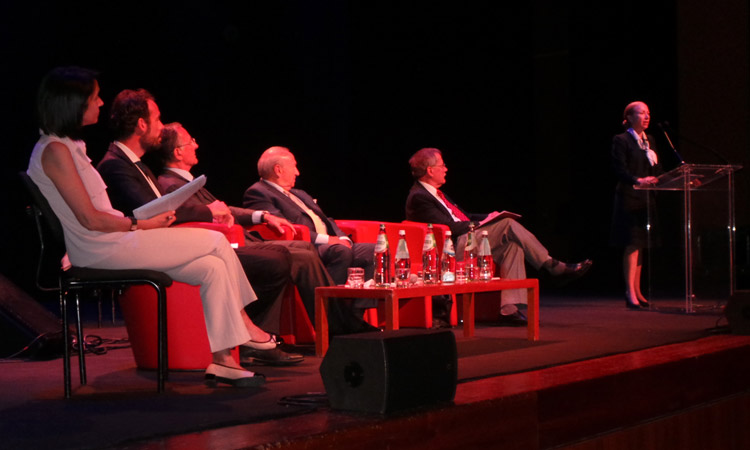 It is a pleasure to be here this evening and to congratulate all of you – trustees, deans, faculty, students, alumni and friends of Temple University Rome – on the golden anniversary of this great program. This is a truly remarkable achievement.

Since Temple University opened its doors at Villa Caproni on Lungotevere for the academic year 1966-67, approximately 30,000 students – the vast majority of them Americans – have had the opportunity to study here in the eternal city.

Whether admiring the Caravaggios in Santa Maria del Popolo, mastering the imperativo, or drinking wine in Trastevere, they have had the opportunity to experience a different culture, a different way of life. They have formed friendships with people who may not share their worldview and they have learned from these new relationships. Perhaps more mature, perhaps more worldly but clearly better educated, they returned home to the United States to share their experiences.

I know the value of these programs personally. Many years ago – more than I wish to say – I had the good fortune to join a Youth for Understanding program in Arhus, Denmark. Living abroad was an eye-opening experience for me. Indeed, I believe those months in Denmark set me on the path that has eventually led me here, to Rome, tonight. Without an early exposure to a world outside of the United States, I don’t think I would have pursued my career in the foreign service. I also don’t think that I would know as much about good Danish beer as I do.

In fact, Italy is the second most popular destination for American students after the United Kingdom.

Educational exchanges are important, now more than ever. They promote mutual understanding and create ties between future leaders. They help bring a very human face to a chaotic, globalized world.

As Senator William Fulbright once observed “The essence of intercultural education is the acquisition of empathy – the ability to see the world as others see it, and to allow for the possibility that others may see something we have failed to see, or may see it more accurately. The simple purpose of the exchange program . . . is to erode the culturally rooted mistrust that sets nations against one another.”

Educational exchanges not only promote empathy and build trust, they reflect the relationship between nations and their people.

Joining me this evening are several experts on various facets of Italian-American cooperation in foreign affairs and the environment. By way of introduction to these presentations I would like to say that the Italian-American bilateral relationship is strong. Indeed, after his recent meeting with Prime Minister Gentiloni, President Trump characterized the relationship as one of “close partners, dear friends and very vital allies.”

This strong relationship is grounded, in part, on the true esteem with which each country holds the other. In truth, ever since Gregory Peck rode his Vespa through the streets of Rome with Audrey Hepburn precariously perched behind him, Americans have loved Italy.

This love of Italy is reflected in the number of Americans flocking here every year as tourists and students, in the strength of the “Made in Italy” brand among American consumers, and in the political, military and economic ties between our countries. It is memorialized in our bilateral agreement to combat trafficking in Italian antiquities and in the publications by scholars who have participated in Fulbright programs. It is even reflected in the amazing

photographs of Saturn taken by the Cassini-Huygens spacecraft – a joint venture between NASA, the Italian Space Agency and the European Space Agency.

I am certain this relationship – this love affair really – will continue, just as I am certain that Temple University Rome will continue to play an important role in introducing young Americans to the splendors of Italy and the joys of international education.

Again, congratulations Temple University Rome for your first 50 years and best of luck over the next 50!