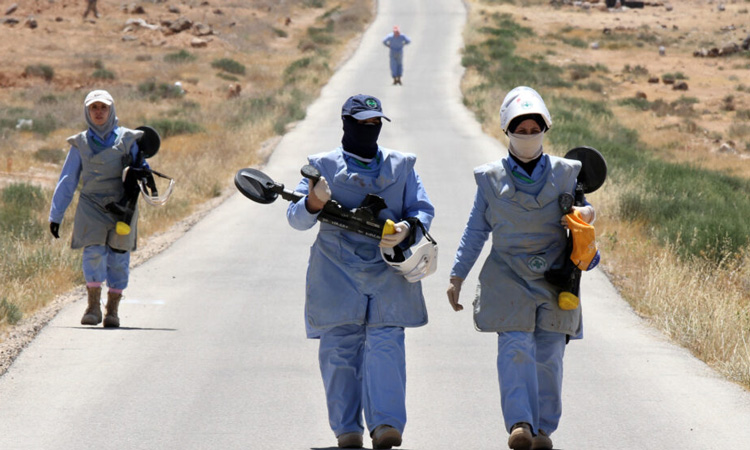 Jordanian mine clearers, supported by Norwegian People's Aid (NPA), work near the Jordanian-Syrian border in 2011. The U.S. partners with NPA and other groups to support post-conflict recovery in countries around the world. (© Nader Daoud/AP Images)

After losing her leg to a land mine in the Democratic Republic of the Congo in 2016, Justine Nabuko wondered if she would still lead a meaningful life. She suffered discrimination and lost her job as a teacher.

Now as vice president of the Victimes des Mines en Action Association, Nabuko helps other land mine survivors regain their independence. Started with support from the U.S. government, the organization teaches carpentry, entrepreneurship and other skills to help land mine survivors find work.

“People with disabilities can live full and meaningful lives, and be valued, if only given the opportunity,” Nabuko says in the State Department’s 20th annual To Walk the Earth in Safety report [PDF, 19.6 MB] issued April 5. “Now I can hold my head high because I am contributing to my family and my community.”

The United States is the world’s largest donor to conventional weapons destruction worldwide, contributing more than $4 billion to programs in more than 100 countries since 1993.

In 2020 alone, U.S. contributions exceeded $259 million and reached efforts in 49 countries. U.S.-funded organizations helped remove mines and better secure weapons and ammunition stockpiles. And they provided assistance, such as prosthetics or vocational training, to survivors.

The funding also supported work to prevent future disasters near the site of the August 4, 2020, chemical explosion at a warehouse in Beirut that killed more than 200 people and injured thousands more.

While Nabuko supports survivors of land mines in her country, women in Colombia, Laos, Tajikistan, and Bosnia and Herzegovina are making their communities safer by clearing explosives, according to the State Department report.

Gulruhsor Zainalova began clearing mines in Tajikistan in May 2017. A 39-year-old widow raising two children, Zainalova says the dangerous work brings both a sense of satisfaction and opportunities for her family.

“I can provide for my children and look forward for their future while at the same time contribute by clearing mines for the safety and future of my community and country,” Zainalova says.