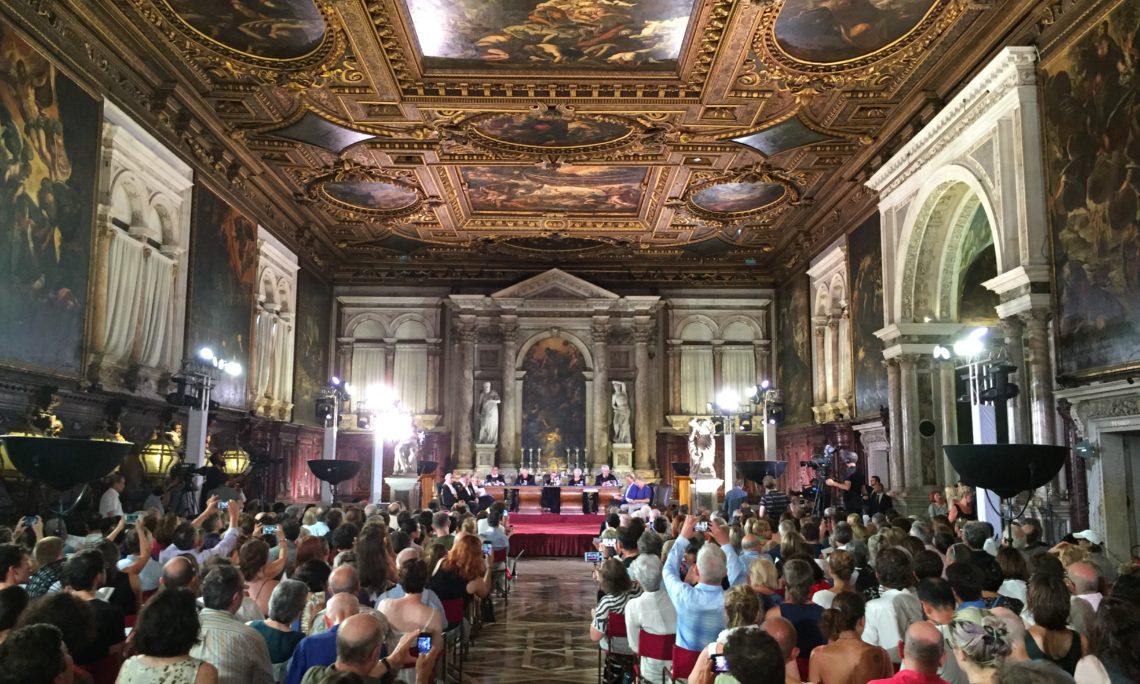 The mock trial in Venice

On July 26-27, Ambassador John Phillips and Consul General Philip Reeker travelled to Venice to participate in a number of events around the 500th anniversary of the Jewish Ghetto—the first of its kind in the world.

The Ambassador, Consul General and Mrs. Reeker had dinner with visiting Supreme Court Justice Ruth Bader Ginsburg, with whom they later attended a production of The Merchant of Venice, performed outdoors in the Jewish Ghetto itself.

The following day, after a courtesy call with Venice Mayor Luigi Brugnaro, the Ambassador visited the exhibition “Venice, the Jews and Europe 1516-2016” at the Palazzo Ducale.

The Ambassador made remarks at a Wake Forest University-hosted cocktail, held at Casa Artom, the former U.S. Consulate in Venice. The group, including Justice Ruth Bader Ginsburg and Wake Forest Venice Director Peter Kairoff, then moved to the roof of the next door Peggy Guggenheim Collection for lunch.

The highlight of the trip was the mock trial of The Merchant of Venice characters Shylock, Antonio, and Portia, in front of a standing-room-only audience and under hot TV lights at the palatial Sala San Rocco. Ambassador John Phillips served as one of the judges during the exclusive event, which was presided over by Justice Ruth Bader Ginsburg. The Ambassador was part of a group of judges that returned a decision much kinder to Shylock than Shakespeare had offered more than 400 years ago. The mock trial was supported in part with a grant from PAS.