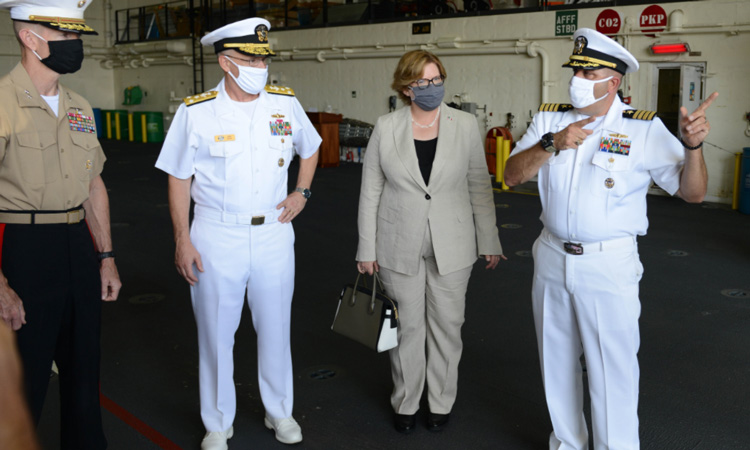 After departing the Naval Station in Norfolk, Virginia on July 27, Expeditionary Sea Base USS Hershel “Woody” Williams (ESB 4) arrived in port in Naples, Italy, for a routine logistics stop on Aug. 13, 2020.

The ship is 784 feet-long (230 meters) and features a 52,000 square-foot (4,830 square-meter) flight deck.  It is designed support special operations, aviation, command and control, and staff support in the U.S. Naval Forces Africa area of responsibility.

While in Naples, the ship’s commanding officer, Capt. David Gray, and Commander, U.S. 6th Fleet, Vice Adm Eugene Black welcomed Consul General Mary Avery aboard for a ship tour. Consul General Mary Avery thanked the U.S. Naval Forces Europe/Africa for the visit and said: “I am proud of your contribution to stability and maritime security in the region, and of the collaboration with our NATO allies and partners.”

“On behalf of the crew, U.S. Naval Forces Africa, and the U.S. Navy,” said Capt. Gray,  “I want to thank this great, historical city of Naples for hosting us and allowing this visit.”