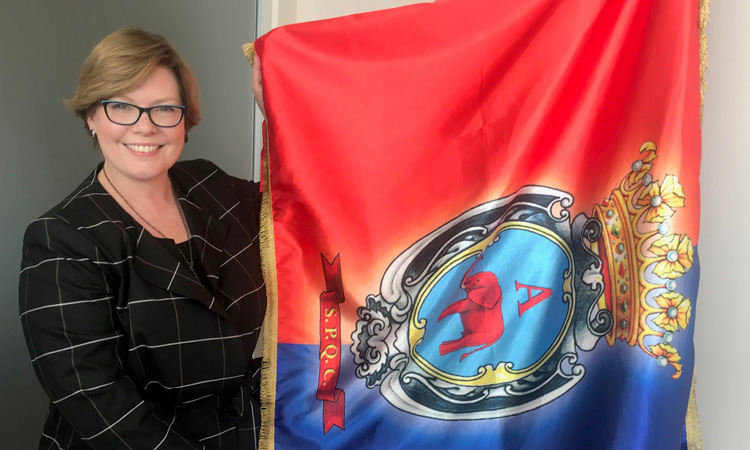 Following her arrival at the Catania airport, Consul General (CG) Mary Avery toured the Enel Innovation Hub & Lab, one of three research laboratories and innovation centers of the Enel Group. During the visit, CG Avery was welcomed by two International Visitor Leadership Program (IVLP) alumni from Catania, Antonio Perdichizzi and Enrica Arena, who discussed their innovative businesses, Tree and Orange Fiber respectively. It was also an opportunity for CG Avery to highlight the 80th anniversary of the State Department’s IVLP this year and emphasize the special role of the IVLP program in the U.S.-Italy relationship.

The following day, after official meetings with Catania Mayor Salvo Pogliese and Prefect Claudio Sammartino, the Consul General participated in a community relations activity in Acireale with NAS Sigonella volunteers and Italian volunteers of the association “Knights of the Sacred Military Constantinian Order of San Giorgio.” The event demonstrated the U.S. – Italian shared values of volunteering and a way for the U.S. to give back to the community that hosts the U.S. military. Together with the other volunteers, CG Avery sanded down and painted the gate outside the Church of Jesus and Mary, a notable historic site in the baroque city.

In Palermo, the CG met with city and regional political leaders – Prefect Antonella De Miro, Sicily’s Governor Nello Musumeci, Regional Assembly President Gianfranco Miccichè, and Mayor Leoluca Orlando – and toured the Mediterranean Institute for Transplantation and Advanced Specialized Therapies (ISMETT.) During her tour at ISMETT, she saw firsthand the institute’s excellence which represents an important example of the strong partnership between the United States and Sicily. During her time in Sicily, she also toured local cultural treasures, including some of the most magnificent villas and spots of the island: Palazzo Biscari in Catania and Villa Malfitano in Palermo, the Norman Palatine Chapel and Palermo’s Opera House.  CG Avery greatly admired the depth and breadth of Sicily’s unique cultural heritage.