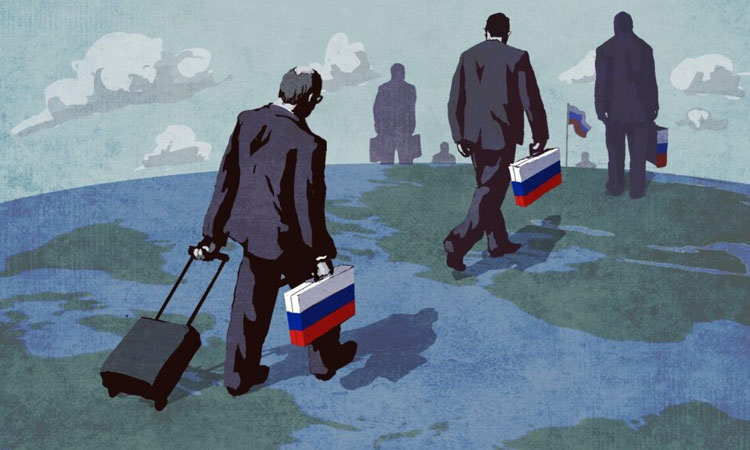 An estimated 400 Russian diplomatic officials were expelled from Europe since the invasion, according to Foreign Policy magazine. Among NATO members, at least 24 out of 30 member states asked Russian officials to leave.

Casting out diplomats is just one way the world has denounced Russian President Vladimir Putin’s unprovoked and unjust war against Ukraine. Dozens of countries have imposed strong sanctions and export controls targeting Russia while the U.N. General Assembly voted overwhelmingly to condemn the Kremlin’s actions in Ukraine.

Several European countries acted following the Russian military’s bombing and brutal killing of civilians, notably those in Bucha, where victims were found in mass graves near Kyiv.

“The war crimes and crimes against humanity committed by the Russian armed forces in Ukraine will not be forgotten” Lithuanian Foreign Minister Gabrielius Landsbergis said April 4 when Lithuania recalled its own ambassador from Moscow and expelled Russia’s counterpart.

This isn’t the first time countries have expelled Russian diplomats over the Kremlin’s unscrupulous behavior.

In 2018, NATO partners and the United States ordered dozens of Russian diplomats and intelligence operatives to leave the country to protest the attempted poisoning of Sergei Skripal, a former intelligence official living in Britain, and his daughter, using a nerve agent.

In 2021, the Czech Republic ordered 63 Russian diplomats to leave on suspicion that Russian intelligence agents were involved in two explosions at a military arms depot in 2014. Two people died there.

Also in 2021, the State Department said the United States expelled Russian diplomats to hold the Russian government to account for the SolarWinds intrusion, reports of bounties on U.S. soldiers in Afghanistan and attempts to interfere in the 2020 U.S. elections.