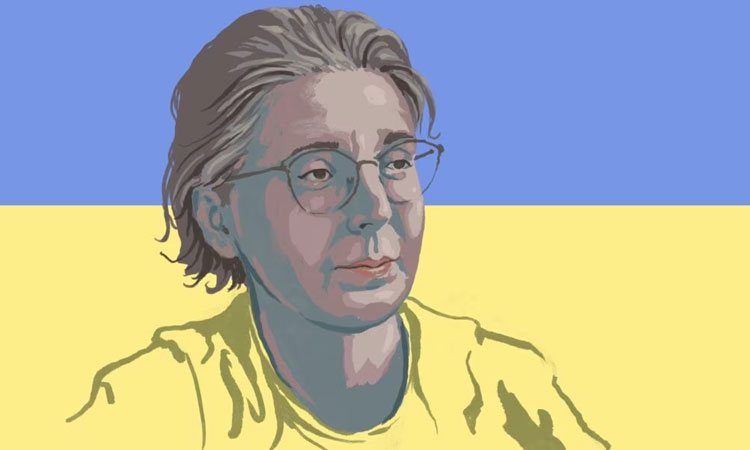 Courageous Ukrainian civilians are making extraordinary contributions in support of their country’s freedom in the face of Russia’s aggression. A ShareAmerica series, Defending Ukraine, profiles some of the people who exemplify that indomitable spirit.

In 2014, when Russia illegally invaded Ukraine, including parts of the Donbas region, Yana Zinkevych was a high school student planning to become a physician. She wanted to do her part to help her besieged country.

Upon graduating, she joined the Ukrainian Volunteer Corps in Donbas where she was responsible for providing medical aid. A limited number of medics worked in conflict areas.

“There was nobody to treat the wounded,” she told The New Yorker. “I understood I had to do something.” So she founded Hospitallers, a volunteer paramedic organization. The agency’s slogan is “for the sake of every life.”

Zinkevych got the idea for the organization’s name after a priest shared the story of the Knights Templars and the Knights Hospitallers while she and others sought shelter from the shelling in Donbas.

She said she began thinking then that if she lived to see the next day — “because the shelling was constant” — she would launch a medical unit and call it Hospitallers.

The group started small, with a handful of volunteers and one vehicle. It has grown steadily over the last nine years. In a typical day the team will treat between 10 and 12 people, helping soldiers and civilians.

Zinkevych led more than 200 evacuations before being injured in a 2015 car accident that left her paralyzed from the waist down. She continues training volunteers on how to treat casualties.

The BBC included Zinkevych on a list of the 100 most inspiring and influential women of 2022. Zinkevych is a member of Parliament and earned the Ukrainian Order of Merit award.

The Hospitallers continue to do lifesaving work, often at great personal risk. Tatiana Vasilchenko, 49, retired from accounting and trained with Hospitallers starting in 2021. She went to Mariupol February 23, 2022, a day before Russia’s full-scale invasion, and was held captive for five months at the Azovstal steel plant before being released. President Volodymyr Zelenskyy honored her and others during a December 2022 ceremony.

Another volunteer, Anastasia Fomitchova, a Kyiv native who lived in France, trained with Hospitallers in 2017 when she was 23. “I felt I wasn’t doing enough,” she told The New Yorker.

She started delivering rations to Ukraine’s troops in Donbas and continues to make trips back to Ukraine during breaks in her university studies.