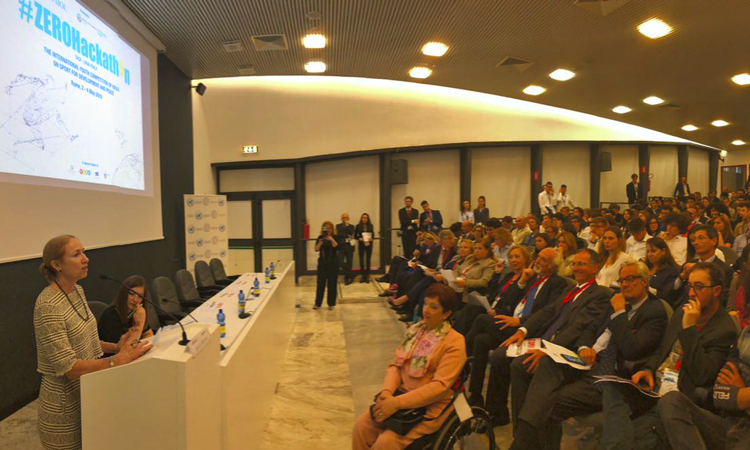 Good afternoon. I’m delighted to be here at the ZERO Hackathon on Sports for Development and Peace.

I would like to thank the Italian Society for International Organizations for organizing this event and also the Italian National Olympic Committee for hosting it for the second time. The focus on the role of sports in development and to support peace is particularly important in these turbulent times.

America believes in the power of sports to strengthen relations between countries. The Department of State’s Bureau of Educational and Cultural Affairs organizes programs with sports envoys – professional American athletes – around the world.  These professionals demonstrate that everyone should have the opportunity to participate in physical activity regardless of their gender, ability, race, or religion.

In 2012, the U.S. also launched the Global Sports Mentoring Program, an initiative that empowers women and girls and people with disabilities through sports-based mentoring.

Since 2012, 113 international leaders from 63 countries have graduated from the program and returned home to launch NGOs, affect public policy and legislation and transform communities by providing access and opportunities through sports.

Through these exchanges and more broadly through community programs throughout American society, in schools and in universities, the important role of sports is clear in teaching fair play, team work, communication and respect for others.

Throughout history, sports have also opened pathways for communication when political dialogue was difficult.

In the early 1970s, for instance, “Ping Pong Diplomacy,” initiated by table tennis players from the United States and China, paved the way for improved bilateral relations. During the World Table Tennis Championship in Japan, Chinese players invited the U.S. team to China.  They were the first group of Americans to go to China in more than 20 years.  Their friendly visit was a major step in a new path for U.S.-Chinese relations.

A mutual love of baseball was the impetus for lessening tensions between the U.S. and Cuba. In 1977, after years of stalled relations, the Houston Astros baseball players and coaches traveled to Cuba to conduct free baseball clinics.  That opened the door for our two nations to participate on the field in international competitions and paved the way for expanded cooperation in other areas.

And last year, despite tensions in the political arena, the Iranian Wrestling Federation lobbied on behalf of the U.S. wrestling team, one of their fiercest competitors in the ring, until the Iranian government issued them visas, allowing the Americans to compete in the Wrestling World Cup in Iran.

The recent 2018 Winter Olympics also offered inspiring examples of how sports transcend differences and adversity, and bring people together.  Remember the athletes from North and South Korea marching together during the opening ceremony?  Sports became an opportunity, and a symbol, for what might prove to be a critical step forward on the Korean Peninsula.

Your participation here today is another wonderful example of the power of people to connect through sport. You have a tremendous opportunity to share your passion and creativity about how sports can empower, inform and transform individuals, communities and even the world.  I can’t wait to hear about all your innovative ideas!  Thank you.