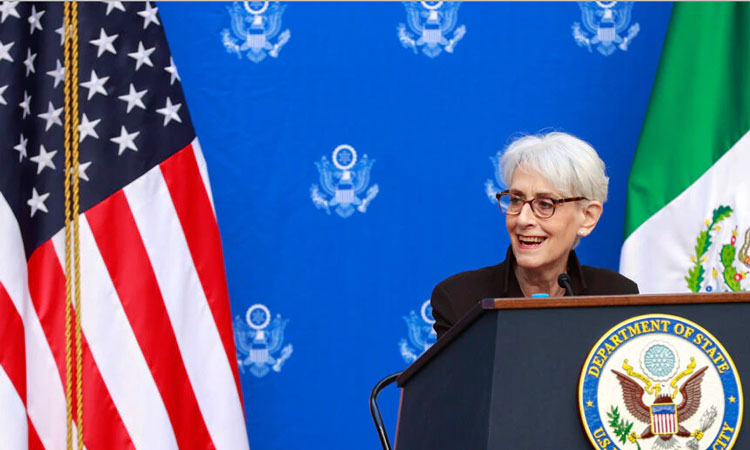 Good evening, and thank you, Foreign Minister Avila, for that kind introduction. What a privilege to speak before so many titans of foreign affairs—keepers of the flame of diplomacy and democracy in so many parts of our planet.

So I join you with deep humility, honored to be able to share a few thoughts with you on the state of democracy and the legacy of one of its greatest champions—a friend, mentor, role model, business partner, and colleague to everyone here: Madeleine Albright.

It is fitting that we meet in the city of Madeleine’s birth—and that we gather as part of the Aspen Ministers Forum, a group she affectionately called “Madeleine and her exes.”

I truly believe she would love nothing more than to be sitting by our sides today, discussing how to make real the promise of democracy—how to be what she forever was: a preeminent defender of freedom.

Last month, on election night in the United States, I was in Mexico City for an official visit. I stayed up in my hotel room until about 1am watching the results, then woke up a few hours later to start a 14-hour workday, as one does when one is traveling as Deputy Secretary of State.

But honestly, that was probably the best preparation I could have for the next day. Because everyone, from Mexican officials to the press, wanted to know what I thought of the initial results. They sought insights into what divided government might mean for America’s global leadership, what could change if the House or Senate changed hands, and what it said about the future of American democracy.

People were curious and concerned, exasperated and excited, interested and intrigued.

What I told them—and what I’ll echo here—had little to do with individual races or congressional majorities or the ins and outs of different polls. Because in that moment, what mattered most wasn’t who won or lost.

What mattered was that democracy won. Democracy proved itself a little more resilient and secure than the day before. More than any candidate, democracy was the victor.

It was a tremendous relief to see, given what transpired in the aftermath of the 2020 campaign, that election denialism was a losing cause in race after race, in state after state.

Instead, we found solace in the strength of our system—a sense of stability in the proper functioning of an election. We saw further proof of the resilience of democratic movements worldwide, coming on the heels of peaceful and fair elections in Kenya and Zambia, in Honduras and the Philippines, all of which might have turned out otherwise.

This was the cause of Madeleine’s life and career, up to the very end. I mean that literally: her final article in Foreign Affairs focused squarely on how democracies can counter the rise of authoritarianism worldwide, a theme which features prominently in the Biden Administration’s National Security Strategy.

Madeleine was always realistic about the vast challenges to our way of life, but eternally optimistic about our prospects for success. Why else would she title that piece “The Coming Democratic Revival”?

That faith, that belief in our collective ability to extend the reach of freedom, was founded in a journey that started here in Prague; that saw her mother rebuild her family’s lives time and again in strange lands; that saw her father’s dreams of a democratic Czechoslovakia dashed not once, but twice. That saw her arrive in America as a refugee, chart her course as a journalist and academic, enter the universe of foreign policy and make it to the tallest heights of public service – all while raising three extraordinary daughters and mentoring and inspiring so many.

Her voice was vital, and we have ample reason to miss her diplomatic mind, her insights into authoritarianism, her unwavering dedication to the advance of freedom.

Now, her cause remains our own. It is incumbent upon us to keep carrying the flame she ignited. To keep fighting against the gathering storm clouds of polarization and disinformation. To keep reinforcing the bedrocks of democracy: promotion of fair and open elections; protection of a free and independent press; preservation of free expression and assembly; adherence to the rule of law—all tied together by a robust civil society and governments that are transparent in their actions and accountable to all their citizens, including women and girls, LGBTQI+ persons, and marginalized groups.

Solidifying these values is essential, because democratically governed nations are best equipped to realize the vision of a secure, stable, healthy, and prosperous world.

Democratic governments are also more apt to remain united in the face of the most immediate issues of our time – thwarting Russia’s aggression; supporting Ukraine’s sovereignty; confronting the People’s Republic of China’s attempts to reshape the international order in its repressive image; addressing political corruption; fortifying the Transatlantic alliance; advancing freedom in the Indo-Pacific, in the Americas, everywhere.

Democratic governments, in short, are central to answering the critical questions before us. But none of it will matter unless we heed another of Madeleine’s favorite mottoes: “Democracy has to deliver.”

She understood, from her own experiences, research, and engagements from the Soviet Union to the Balkans to our own country, that elections, the rule of law, and the tools of democracies only matter if they yield tangible improvements in our citizens’ circumstances.

People want to make their voices heard, but they also want to live a life. As Madeleine put it, “people not only want to vote, but they want to eat.”

That means democracy has to prove itself beyond the ballot box. Its adherents and officials have to help families put money in their pocketbooks, put food on the table, and put a roof over their heads.

We have to maintain safe streets and strong schools. We have to ensure access to medical care, clean air, and clean water.

We must draw contrasts with authoritarian competitors, a task that is sadly all too easy at the moment—from Russia’s human rights abuses in Ukraine, to the PRC’s saber rattling around Taiwan, to Iran’s violent suppression of peaceful, women-led protests, to the DPRK’s destabilizing missile launches.

None of that will produce the kind of economic or physical security families need and deserve. We must demonstrate the opposite – that openness, good governance, and accountability translate into broadly-shared prosperity and a better quality of life.

This is vital for a simple reason: conducting a first election is important. But if democracy doesn’t deliver, we may never get to the second election. Citizens may prefer the predictability of what was over the uncertainty of what might be.

So we have work to do, and in the United States, we are putting our best foot forward. Building on Madeleine’s work through the Community of Democracies, the National Democratic Institute, and this forum, the Biden Administration has placed the promotion of democratic values at the heart of our diplomacy.

We released the first-ever U.S. Strategy on Countering Corruption, because corruption saps confidence in democracy, undermines faith in accountable government, erodes governance, and leaves too little room for hope.

At the Summit for Democracy, we rallied world leaders, civil society, and the private sector around an affirmative agenda and collective action, as more than 100 governments produced over 750 commitments to advance women’s equality, whistleblower protection, and press freedom.

We continue to strengthen alliances and work through multilateral institutions to hold governments accountable for human rights abuses.

Looking ahead, we remain focused on broadening the chorus of democratic champions by shoring up our existing alliances, embracing emerging partners, and working with non-governmental actors. We remain determined to defend civic space, combat corruption, counter authoritarianism, and demonstrate how open systems lead to prosperous societies.

None of this will be easy. Ensuring an enduring democratic movement will not happen overnight, nor will it be possible to achieve unless passionate leaders, effective advocates, and courageous citizens are ready to fight for it. The way Ukrainians are fighting for their freedom. The way Iranian women are demonstrating for their dignity. The way activists are calling for the release of Alaa Abd El-Fattah in Egypt. The way citizens of the PRC are marching for their basic rights.

This is going to require the individuals in this room and our successors to take their cue—to always step forward and to remain persistent even when progress is slow and winding.

It’s going to demand our unyielding optimism, the kind that defined Madeleine’s life.

As usual, her words can carry us through. As she wrote in her final essay: “After too many years of handwringing, the time is right for democratic forces to regain the initiative. Democracy is fragile, but it is also resilient. In every region, the generation coming of age is smart, outspoken, and fearless. Worldwide, people are demanding more, while authoritarian leaders are tiring and running out of answers… Although tattered and torn, freedom’s flag is ready to rise.”

Let us be the ones who help raise that flag again. Let us deliver a democracy that delivers for our people. Let us make certain that the next generation, and those to follow, know democracy’s victory, its blessings, its possibilities – and see it as a source of hope. Let us carry forward this call as Madeleine would have wanted – together.