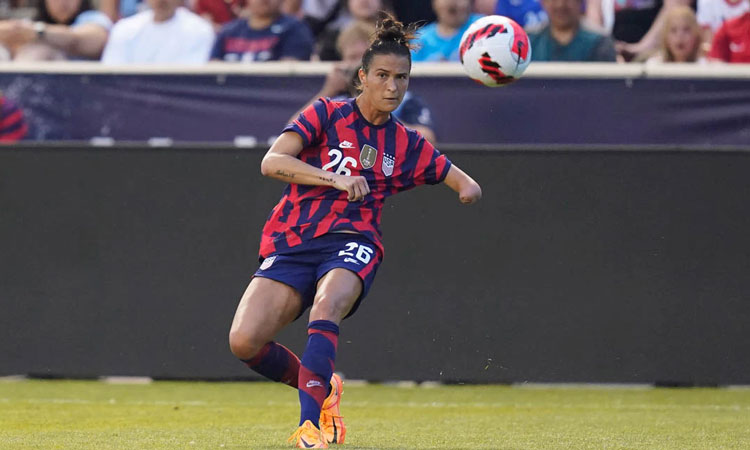 Carson Pickett, who was born without a left forearm and hand, became the first person without a limb to make the U.S. Women’s National Soccer Team in 2022. (© Rick Bowmer/AP Images)

There are an estimated 1 billion people with disabilities worldwide. Their contributions benefit us all.

In the United States, July is Disability Pride Month. It marks the 1990 enactment of the Americans with Disabilities Act, a landmark U.S. rights law that extended civil rights protections to persons with disabilities and assured that all Americans would benefit from their talents.

“To me, Disability Pride is many things,” said Jessica Ping-Wild, an American blogger who lives in London. “It’s a chance for disabled people to declare their inherent self-worth, something that isn’t often done by individuals outside of the community.”

The first official Disability Pride celebration occurred in 2015 to commemorate the ADA’s 25th anniversary. The historic legislation was signed on July 26, 1990.

ADA prohibits discrimination against people with disabilities in all areas of public life and enables their full participation in society — by working, going to school, using public and private transportation services, voting, buying goods and services or accessing public places. [See a timeline of some landmark events and legislation leading up to the passage of the ADA.]

During July, community members highlight their contributions to society and advocate for their legal rights. Several U.S. cities hold parades to recognize the community.

Raising awareness through a flag

The disability pride flag helps increase the community’s visibility. Ann Magill designed the flag in 2019 with feedback from community members. She then worked with photosensitive people to produce a more accessible version.

Five diagonal stripes of different colors rest on a black background. The black field mourns the victims of violence and abuse against persons with disabilities. The diagonal suggests cutting across barriers that separate the disabled from society.

By empowering people with disabilities, the ADA also strengthens the U.S. economy. Consider these numbers:

The full inclusion of all State Department employees, disabled and non-disabled alike, is a core component of the efforts of the Secretary’s Office of Diversity and Inclusion, led by Ambassador Gina Abercrombie-Winstanley, chief diversity and inclusion officer.

The State Department also supports Mobility International USA’s National Clearinghouse on Disability and Exchange and its work to increase the number of people with disabilities participating in international exchange programs.

People with disabilities continue to make historic contributions in many fields such as music, science, sports and technology.

Ralph Braun, an entrepreneur who had muscular dystrophy, is considered the “father of the mobility movement” for his ideas that led to the invention of wheelchair lifts, wheelchair accessible vans and motorized scooters.

Notable scientists include “father of the lightbulb” Thomas Edison, who lost his hearing. Physicist Stephen Hawking, who had amyotrophic lateral sclerosis, changed the way we look at the universe.

In sports, Paralympics showcase the talents of people with disabilities every four years. Off the field, athletes advocate for inclusion, access and equity. Elite U.S. athletes, including gymnast Simone Biles and professional basketball star Kevin Love, help break the stigma of mental illness by acknowledging their own battles and raising awareness of conditions that affect millions worldwide.

On the U.S. soccer field, defender Carson Pickett this year became the first person without a limb to make the U.S. Women’s National Soccer Team. “I hope to encourage anyone who struggles with their limb difference to not be ashamed of who they are,” Pickett said.