Remarks by Ambassador John R. Phillips at the Eid-al-Adha Reception

Good evening your Excellencies, ladies and gentlemen. I am delighted to welcome you all to Villa Taverna for this Eid al-Adha celebration.

EIds and Iftars hosted by the Ambassador have become a cherished tradition at our Embassy. It is also an important annual event at U.S. embassies around the world, the State Department, and the White House.

Eid al-Adha, the festival of sacrifice, one of the most celebrated holidays worldwide each year, honors the willingness of Ibrahim, or Abraham, to sacrifice his son as an act of submission to God’s command. In the story, God intervenes through angel Jibra’il, or Gabriel, and informs him that his sacrifice has already been accepted.

In that spirit of sacrifice, Eid al-Adha is a time to purify the soul and refocus our attention on what matters most – family, friends, and our communities.

This is a moment to reflect on how we can strengthen our ties to one another through compassion and charity, values we all share.

This year, we have seen war, acts of terrorism, and natural disasters claim many lives around the world, in Syria and Iraq, in Bangladesh and Pakistan, across Europe, and in the United States.

And of course, Italy is still coping with the terrible earthquake that caused so much destruction in central Italy. Our hearts go out to the families of those who have been killed, and our prayers go to those injured.
Despite these tragic losses, the ways in which communities react to these horrible events reflects our shared strength.

It has been heartening to see that so many people have generously donated goods, blood, and funds to the earthquake relief efforts from across Italy and the world. I’m pleased that so many Americans have contributed to these efforts, including our own Embassy community.

I have been particularly struck by stories of how several of the refugees whom Italy has welcomed have been so eager to give back to their new communities.
Groups of refugees and migrants have been volunteering in the affected areas, from cleaning up after the disaster to helping survivors cope with the aftermath. Despite their own limited resources, many have also contributed funds towards relief efforts.

These migrants have said that, because Italy welcomed and helped them when they arrived here, it is now their turn to help Italians.

The United States applauds Italy’s compassionate reception of tens of thousands of migrants and refugees as we face a historic global refugee crisis that has left 65 million people displaced, including more than 21 million refugees.

We are continuing our work to strengthen the international response to humanitarian crises around the world.  Later this month, world leaders will gather at the 71st session of the UN General Assembly where President Obama will convene a Leaders’ Summit on Refugees.

The United States has committed to work with the international community to significantly increase humanitarian assistance funding, double the global number of refugees afforded opportunities for resettlement or other humanitarian admissions, and help empower refugees in countries of asylum.

This year, the United States will admit at least 85,000 refugees from all over the world.  Since 1975, over 3.2 million refugees have joined the diverse fabric of our country, representing a multitude of different backgrounds and faiths and making us a stronger, more pluralistic society.

Together, we can build a more sustainable and responsive humanitarian system capable of meeting today’s unprecedented global humanitarian challenges.
Thank you for joining us here this evening. 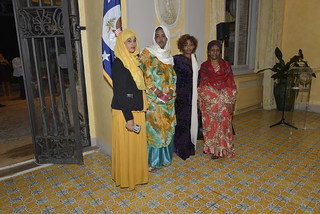