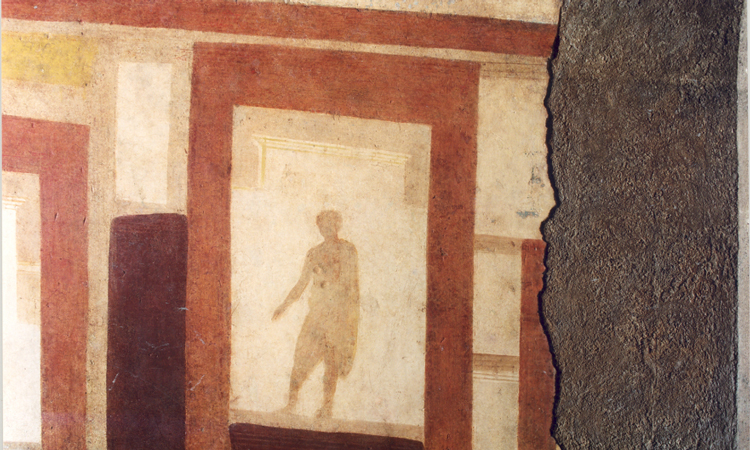 The cryptoporticus of the U.S. Tri-Mission Rome, Italy

Throughout Rome’s long and colorful history, many buildings have occupied the site where the US Tri-Mission now stands; this has been one of the historically and archaeologically most significant areas of Rome. First chosen by Julius Caesar, then by the Roman historian G. Sallustius Crispus, as their place of residence in the 1st century B.C., the so-called horti Sallustiani (Sallustian Gardens) became an Imperial estate under Emperor Tiberius, and were particularly noteworthy for their lush gardens and rich monuments. The gardens of this imperial residence were richly embellished with Greek and Roman statues. Indeed, numerous masterpieces such as the Dying Gaul in the Capitoline Museums and the famous Ludovisi Throne (now on view in Palazzo Altemps of the Museo Nazionale Romano) were rediscovered on these grounds. Even the obelisk now standing at the top of the famous Spanish Steps was unearthed from the Sallustian Gardens.The cryptoporticus is one of the buildings constructed in this area during the centuries of the Empire; dated to the 1st century B.C., it was embellished with late 2nd-early 3rd century, partly preserved frescoes, and served as an underground passageway connecting various parts of the imperial palace in the Sallustian Gardens. The period of splendor of the gardens of Sallust was abruptly terminated by the invasion of the Visigoths in 410 A.D. During the Middle Ages and the Renaissance, the grounds where the Imperial summer residence had once stood became an area of transition between the town and the countryside. The presence of graffiti from these periods suggests that the cryptoporticus was known and frequented by occasional visitors. After the creation of the wonderful Villa Ludovisi in the 17th century, the cryptoporticus was reused as the underground storage space of the Museum of Statues. This building was a relatively small one, visible on several ancient maps and mentioned in written documents, and housed the most beautiful pieces of the world-renowned Ludovisi collection of statuary, now for the most part in Palazzo Altemps. The museum and its underground rooms remained in use until the end of the 19th century, when the entire area was altered and changed its topographical and urbanistic appearance.

The cryptoporticus, a Roman underground vaulted passageway decorated by frescoes, is certainly the oldest place in the United States Tri-Mission in Rome. The corridor was one of the monuments within the summer Imperial residence of the horti Sallustiani and is dated to mid-1st century A.D. The known section of the cryptoporticus, interrupted at one end by a modern foundation wall and at the other by the Embassy motor-pool garage, is northeast-southwest oriented and lies about 2.5 meters below the street level. The monument was accidentally rediscovered in 1949–50 during the construction of the Embassy’s garage. At that time it was restored and published on the bulletin of the Accademia Nazionale dei Lincei[i]. Between 1996 and 1998 an archaeological excavation and the restoration of the frescoes were performed in cooperation with the Superintendent’s Office of Archeology of Rome and a group of renowned Italian experts and professionals[ii]. The project was funded by the Department of State and thanks to the essential contributions of the World Monument’s Fund and the Samuel H. Kress Foundation. Because of the complex conservation of the frescoes that requires a strict control of the microclimate, the cryptoporticus is not open to the public.
The construction of the cryptoporticus was carried out at the time when Sallust’s gardens were included in the Imperial domain, whereas the frescoes, possibly a second phase of decoration, date to the early Severan period, between 195 and 205 A.D. The original set-up of the monument is unknown. This type of underground structure was built to connect different areas of the gardens, as well as to retain slopes and create terracing. It may have consisted of a simple gallery or could be composed of a series of parallel corridors connected to each other, or even of tri-or quadrilateral systems. On the walls of the central room, the frescoes present an elaboration of the second and fourth Pompeian styles that combines the creation of an architectural setting with the decoration in square areas, organizing the surface in groups of three panels in which allegorical figures are depicted. Some of these are still visible: a Pegasus, a male cloaked figure, possibly a Season’s genius and a greeting figure. The decoration of the vault represents geometric elements and flowering decoration. The marble panels covering the walls below the frescoes have disappeared throughout the course of time. The tapered windows in the shape called “a gola di lupo” opened on an exterior space, today’s Via Friuli, an ancient road indicated on old maps with the name “Via di Porta Salaria” or “Salara antica”.
Excavations carried out in 1996-1997 brought to light two partially frescoed rooms situated opposite one another at the western end of the cryptoporticus. The access to the left room, originally a lateral branch of the cryptoporticus interrupted today by a modern wall, was blocked before the frescoed decoration was carried out and was reopened in the Renaissance period through a small door, surmounted by a fragment of a medieval sculpture in white marble (a transenna), re-used as lintel. The frescoes in this room, depicting a shrine and various decorative elements, predate those in the main passageway (end of the 1st century A.D.). A stamped brick, reconfirming the date of the cryptoporticus, was discovered in a Roman sewer in this area. An interesting partially preserved charcoal sketch from the Renaissance period, representing a Bacchic thiasos, is preserved on the higher portion of the plaster[iii]. This scenario, together with several structural modifications carried out in the cryptoporticus (the construction of a sewer system and the raising of the floor level), reflects a new vitality of this monument during the Renaissance period. The remnants of frescoes in the room to the right of the main corridor are of the same period as those in the main corridor.

THE GRAFFITI IN THE CRYPTOPORTICUS
The walls reveal a great amount of extremely interesting graffiti spanning many centuries. A research project, published in 2008 and performed by the Swedish Institute for Classical Studies in Rome in collaboration with the USA Embassy, suggests previously unknown aspects regarding the use of the cryptoporticus during various centuries and the persons who worked and lived in this vicinity[iv]. The graffiti were divided into three different periods[v]. The first period has its terminus post quem at the date of the frescoes (beginning of the 3rd century.) A monogrammic cross, the name ‘Aureus’ and a Jewish menorah, already published by the Swedish Institute for Classical Studies, belong to this first period. These graffiti date to approximately the 4th century, when the horti Sallustiani were still in existence and in use. At that time, people of different religions used the cryptoporticus as an underground passageway and left marks expressing their religious beliefs on its walls.
The second period corresponds to the Medieval and early Renaissance, when the area was accessible to the city population. At that time, the cryptoporticus was probably used for storage in connection with farmlands in the disabitato, the unpopulated area inside the walls of the city used mainly for cultivation during the middle ages. Individuals have left signs and drawings on the walls as was common in many abandoned Roman monuments. Graffiti dating to this phase includes the representation of a ship with armed figures, dating to the 12th-13th century. The simplified copy of the female figure painted in the Roman fresco on the left wall, which was incised on the plaster next to the latter, can be ascribed to the same period.
The latest group of graffiti consists mainly of signatures of visitors, dating to approximately the 16th and 17th centuries, often accompanied by the date of the visit, introduced using the typical formula ‘A di’ (‘on the day of’). This evidence corresponds to the transformation of the cryptoporticus into a storage room for broken statuary and bas-reliefs from the collection of the Ludovisi family, who owned the property from 1621on. In fact, the monument was located underneath the small building, visible in several 17th and 18th century maps, which was used as a museum of statues by Cardinal Ludovisi. In this period only a few visitors were admitted to visit the museum, where the most remarkable pieces from the collection were displayed, and its underground storage room, probably experienced as an attractive grotto with Roman frescoes. Most likely, on these occasions, the frescoed plaster was used by the visitors as a board for signatures and dates, as a testimony of their visit.

[iii] V. Brunori, ‘An unpublished charcoal sketch’, in Unexpected voices. The graffiti in the cryptoporticus of the Horti Sallustiani, and papers from a conference on graffiti at the Swedish Institute in Rome, March 7, 2003, edited by Olof Brandt, Stockholm 2008, pp. 87-93.

[iv] Unexpected voices. The graffiti in the cryptoporticus of the Horti Sallustiani, and papers from a conference on graffiti at the Swedish Institute in Rome, March 7, 2003, edited by Olof Brandt, Stockholm 2008 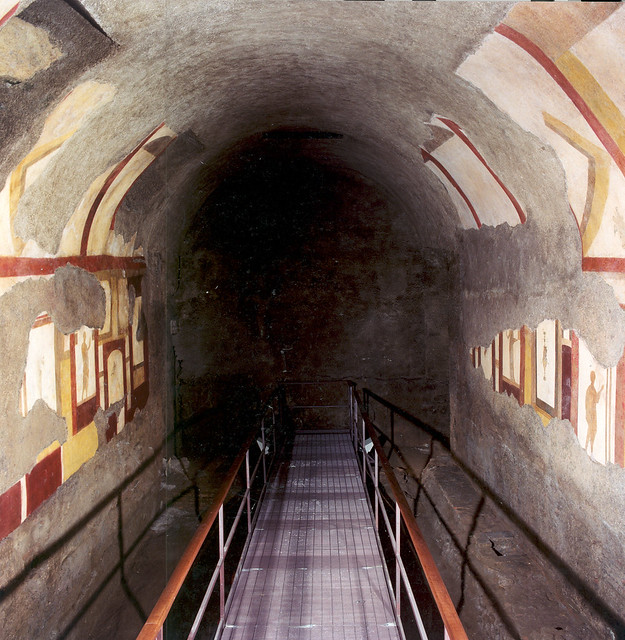