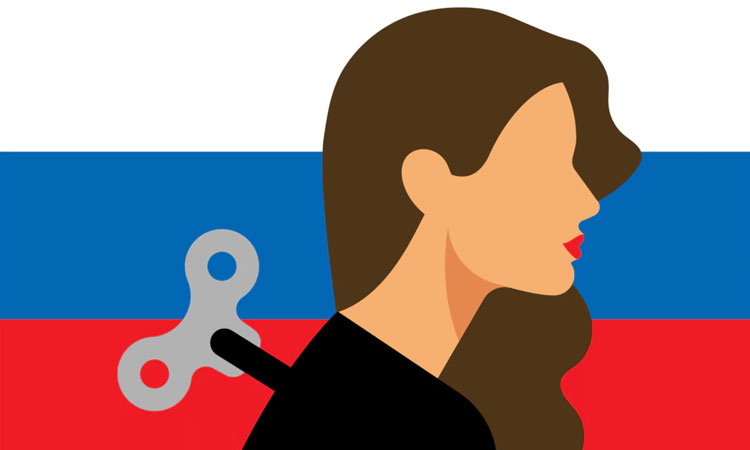 This article is part of a series describing major players in the Russian government’s disinformation campaigns. You also can learn about broadcaster Vladimir Solovyov and Dimitri Peskov, spokesman for Vladimir Putin.

To succeed in Russia’s state media environment, individuals need to promote the Kremlin line. Margarita Simonyan learned that lesson at a young age.

As a reporter covering the war in Chechnya in the early 2000s, she promoted the Kremlin’s viewpoint. The Kremlin seemed to reward Simonyan for her loyalty by appointing her head of Russia’s first state-funded English language media outlet, RT (then called Russia Today), when she was only 25.

A new report from the State Department called her “adept at serving up lies as truths — and with a smile” and says “her main function is Vladimir Putin’s loyal propagandist.”

Simonyan is a protégé of Aleksey Gromov, an aide to Putin. A yellow government landline telephone sits on her desk and in 2015 she admitted that it is a secure connection directly to the Kremlin “to discuss secret things.”

The European Union sanctioned Simonyan in February, calling her a “central figure” of Russian propaganda. And after Russia’s February 24 invasion of Ukraine, Google prohibited RT and all Russian Federation state-funded media from collecting advertising revenue on its platforms.

In public statements, she mocks critics of Russia’s policies and makes wildly false claims about Ukraine, its history and its leaders.

Some examples of her propaganda include:

During an April discussion with Russian broadcaster Vladimir Solovyov, the pair claimed to be targets of an assassination plot. She accused Aleksey Navalny, a jailed Russian opposition activist, and Ukrainian President Volodymyr Zelenskyy of plotting the assassination, calling them both “neo-Nazis.”

Her relatives also are part of Russia’s propaganda machine. Simonyan’s husband is television host Tigran Keosayan. He said on April 25 that “ungrateful” Kazakhstan could face the same consequences as Ukraine if it did not side with Russia.