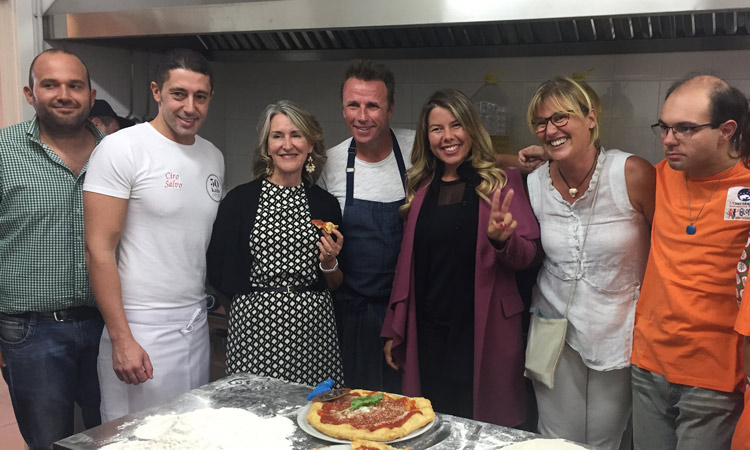 Chef Marc Murphy at the cooking event held at “La Gloriette” with pizza-maker Ciro Salvo, Consul General Countryman, Alderman for Youth Alessandra Cemente, and some guests of the center

On September 25, American Chef Marc Murphy partnered with top Neapolitan pizza maker Ciro Salvo for a cooking workshop for 45 youth held at “La Gloriette,” a Naples-based NGO focused on equal opportunities/inclusion for people with developmental disabilities.  Consul General Mary Ellen Countryman, as well as the city Alderwoman for Youth attended the event and enjoyed Ciro Salvo’s pizza and Murphy’s ratatouille, together with the young guests of the center.

On September 26, Murphy visited the culinary high school “Vittorio Veneto” in one of Naples’s most challenged neighborhoods, Scampia. Before his workshop with students, Murphy shared his experiences growing up in Italy and France and learning about food, and his work as a television star and restaurateur in New York with an audience of about 130 students and teachers who gathered in the school auditorium.  The rapt audience appreciated Murphy’s emphasis on working hard to achieve one’s goals:  “This is the only way you can shape your future and contribute to your communities,” he said.  Later the same day, Murphy visited Naples food emporium “Eccellenze Campane”, for a cooking show organized in partnership with farmers association “Confagricoltura.”