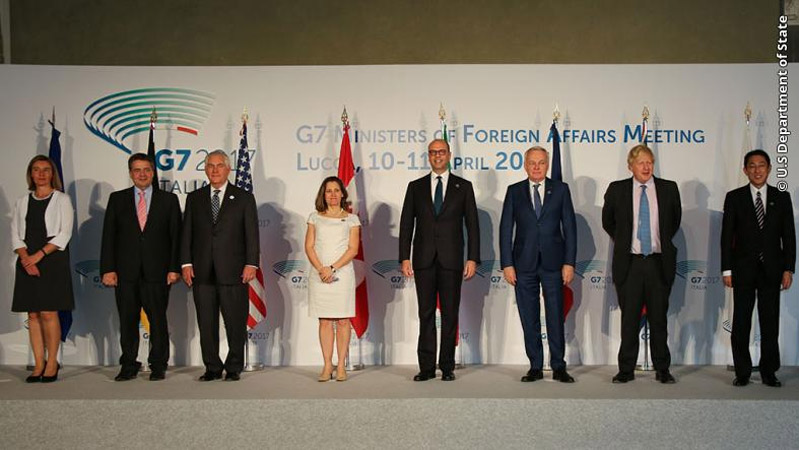 U.S. Secretary of State Rex Tillerson poses for a family photo with his fellow G7+1 counterparts.

Today U.S. Secretary of State Rex Tillerson wrapped up his attendance of the G-7 Foreign Ministers’ Meeting in Lucca, Italy. Secretary Tillerson, along with the foreign ministers of Canada, France, Germany, Italy, Japan, and the High Representative of the European Union released a joint communique outlining major international issues covered during their meetings, which were intended to advance global peace and security.

The joint statement noted that the Group of Nations stands united to face the most pressing international challenges and is determined to coordinate its efforts in “promoting the rules-based international order, tackling terrorism and violent extremism, promote stability, inclusion and prosperity.”

While the statement covers nearly two dozen regions and topics of interest ranging from Middle East and Africa to maritime security, the issues of counterterrorism, defeating ISIS, and the crises in Iraq and Syria were adressed at great length. The statement acknowledged that international cooperation remains of paramount importance in the fight against terrorism. Regarding Iraq, the foreign ministers called for the continued support for the Iraqi authorities,the United Nations,and the Global Coalition’s efforts to address the needs arising from the Mosul campaign and throughout the country. The leaders’ statement also addressed the international community’s significant progress in reducing ISIS presence in Syria and Iraq, stabilizing areas freed from ISIS control in Iraq, curbing the flow of foreign terrorist fighters to conflict zones, degrading ISIS access to resources, and countering ISIS propaganda.

At the same time, the group of foreign ministers expressed grave concern at continuing violence and the lack of humanitarian access in Syria. The statement called upon all parties, “in particular the regime and its backers, including Russia and Iran, to allow sustainable, unhindered and adequate humanitarian assistance to all people in need.”

On the sideline of the G-7 meetings, Secretary Tillerson addressed recent events in Syria, noting that the international community can not “accept the normalization of the use of chemical weapons by other actors or countries, in Syria or elsewhere.”

“Last week, Bashar al-Assad’s regime killed even more of its own people using chemical weapons. Our missile strike in response to his repeated use of banned weapons was necessary as a matter of U.S. national security interest. We do not want the regime’s uncontrolled stockpile of chemical weapons to fall into the hands of ISIS or other terrorist groups who could, and want to, attack the United States or our allies,” Secretary Tillerson continued.

Although the recent U.S. military action was a direct response to the Assad regime’s barbarism, Secretary Tillerson reaffirmed the United States’ priority in Syria and Iraq remains the defeat of ISIS. Secretary Tillerson stated,“To stabilize Syria we will need the G-7’s direct participation helping settle the conflict in Syria, protecting the civilian population, and committing to reconstruction that eventually will lead to normalcy for a unified Syria.”

Ahead of his April 12 trip to Moscow, Secretary Tillerson also addressed Russia as an important actor in Syria. The Secretary said, “It is also clear Russia has failed to uphold the agreements that had been entered into under multiple UN Security Council resolutions. These agreements stipulated Russia as the guarantor of a Syria free of chemical weapons, that they would also locate, secure, and destroy all such armaments in Syria. Stockpiles and continued use demonstrate that Russia has failed in its responsibility to deliver on this 2013 commitment.”

While in Russia, Secretary Tillerson will meet with Russian Foreign Minister Sergey Lavrov and other Russian officials to discuss Ukraine, counterterrorism efforts, bilateral relations and other issues, including the Democratic People’s Republic of Korea and Syria. This trip is part of the United States’ effort to maintain direct lines of communication with senior Russian officials and to ensure U.S. views are clearly conveyed, including on next steps in Minsk implementation.