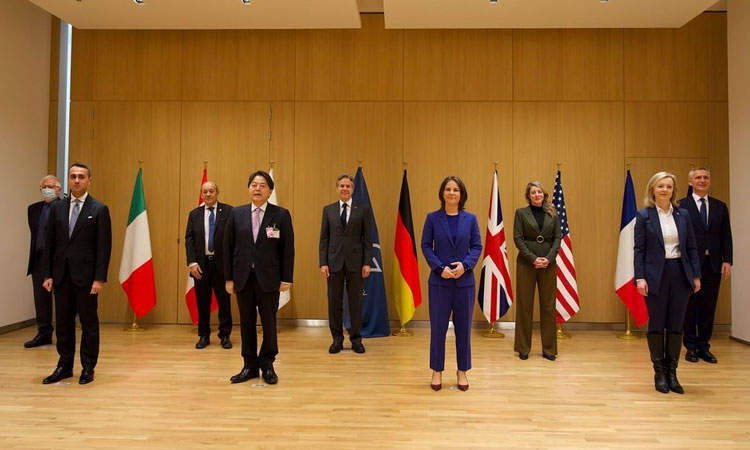 We, the G7 Foreign Ministers of Canada, France, Germany, Italy, Japan, the United Kingdom, and the United States of America, and the High Representative of the European Union, condemn in the strongest terms the atrocities committed by the Russian armed forces in Bucha and a number of other Ukrainian towns. Haunting images of civilian deaths, victims of torture, and apparent executions, as well as reports of sexual violence and destruction of civilian infrastructure show the true face of Russia’s brutal war of aggression against Ukraine and its people. The massacres in the town of Bucha and other Ukrainian towns will be inscribed in the list of atrocities and severe violations of international law, including international humanitarian law and human rights, committed by the aggressor on Ukrainian soil.

In the presence of the Foreign Minister of Ukraine, Dmytro Kuleba, we expressed today our heart-felt solidarity with the Ukrainian people and our deepest condolences to the victims of this war and their families. We underline our unwavering support for Ukraine within its internationally recognized borders and express our readiness to assist further, including with military equipment and financial means, to allow Ukraine to defend itself against Russia’s aggression and to rebuild Ukraine.

We underscore that those responsible for these heinous acts and atrocities, including any attacks targeting civilians and destruction of civilian infrastructure, will be held accountable and prosecuted. We welcome and support the ongoing work to investigate and gather evidence of these and other potential war crimes and crimes against humanity, including by the ICC Office of the Prosecutor, the Commission of Inquiry mandated by the UN Human Rights Council, the Human Rights Monitoring Mission Ukraine of the OHCHR, and the OSCE’s mission of experts mandated by OSCE Participating States. We will provide investigative support, technical experts and funding. We will continue to promote accountability for all those complicit in Moscow’s war of choice, including the Lukashenka regime in Belarus. We are convinced that now is the time to suspend Russian membership of the Human Rights Council.

Russia must immediately comply with the legally binding order of the International Court of Justice (ICJ) to suspend the military operations that it commenced on 24 February 2022 in the territory of Ukraine. Further, we urge Russia to withdraw completely its military forces and equipment from the entire territory of Ukraine within its internationally recognized borders.

We warn against any threat or use of chemical, biological or nuclear weapons. We recall Russia’s obligations under international treaties of which it is a party, and which protect us all. Any use by Russia of such a weapon would be unacceptable and result in severe consequences. We condemn Russia’s unsubstantiated claims and false allegations against Ukraine, a respected member of the Biological and Toxin Weapons Convention and the Chemical Weapons Convention that is in compliance with its legal obligations under those instruments. We express concern about other countries and actors that have amplified Russia’s disinformation campaign.

We express our gravest concern with Russia forcefully seizing control of nuclear facilities, and other violent actions in connection with a number of nuclear facilities, nuclear and other radioactive material, which have caused and continue to pose serious and direct threats to the safety and security of these facilities and their civilian personnel, significantly raising the risk of a nuclear accident or incident, which endangers the population of Ukraine, neighboring States and the international community.

We reiterate our demand that Russia upholds its obligations under international humanitarian law and desists from further blatant abuses. The Russian leadership must immediately provide for safe, rapid and unimpeded humanitarian access and make safe passages work, enabling humanitarian aid to be delivered to besieged cities and civilians to reach safety.

We commit to supporting the Government of Ukraine’s humanitarian coordination structure and to disburse humanitarian support quickly. We ask others to join in this effort. A humanitarian push including more funding is urgently needed for Ukraine and beyond as Russia’s ruthless war and actions are having massive consequences on global commodity and food prices. The resulting rise in food insecurity is being felt disproportionately by the most vulnerable. We stand in solidarity with our partners across the world who have to bear the rising price of President Putin’s unilateral choice to wage war in Europe. We will make coherent use of all instruments and funding mechanisms to address food insecurity, keep markets open, and build resilience in the agriculture sector on all continents. We will actively counter Russia’s narrative that Western sanctions have caused the rise in global food prices and call it out for what it is: a blatant lie.

In light of Russia’s ongoing aggression against Ukraine, carried out with Belarus’ complicity, we have already adopted unprecedented and coordinated economic and financial sanctions against Russia that impose a significant cost on its economy. We stress the necessity of further increasing the economic pressure inflicted on Russia and the Lukashenka regime in Belarus. Together with international partners, the G7 will sustain and increase pressure on Russia by imposing coordinated additional restrictive measures to effectively thwart Russian abilities to continue the aggression against Ukraine. We will work together to stop any attempts to circumvent sanctions or to aid Russia by other means. We are taking further steps to expedite plans to reduce our reliance on Russian energy, and will work together to this end.

We commend those neighboring states to Ukraine that demonstrated great solidarity and humanity by welcoming Ukrainian refugees and third country nationals affected by the conflict. We confirm the need for increased international assistance and will continue to support these countries, including by receiving more refugees. President Putin’s war of aggression against Ukraine has already forced millions of civilians, especially women, children, and elderly, to flee their homes. Over 4.2 million crossed the border to other countries, almost all of them to the EU and the Republic of Moldova. We reiterate our concern about the risk to this vulnerable population, including the risk of human trafficking and our commitment to protect these refugees.

Ministers paid special attention to the Republic of Moldova, which hosts the largest group of refugees from Ukraine per capita. The Ministers agreed to further coordinate their assistance for Moldova’s humanitarian response and long-term resilience following the Moldova Support Conference co-hosted by Germany, France and Romania on 5 April in Berlin and the establishment of the Moldova Support Platform.