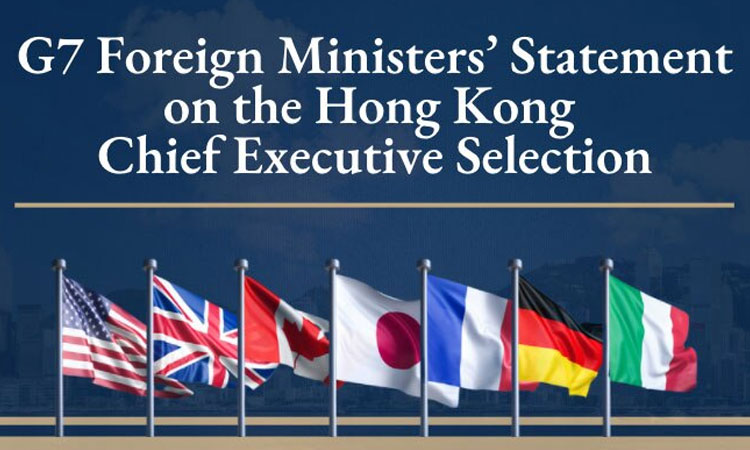 The text of the following statement was released by the G7 foreign ministers of Canada, France, Germany, Italy, Japan, the United Kingdom, the United States of America, and the High Representative of the European Union.

We, the G7 Foreign Ministers of Canada, France, Germany, Italy, Japan, the United Kingdom, and the United States of America, and the High Representative of the European Union, condemn in the strongest terms the brazen launch of another Intercontinental Ballistic Missile (ICBM) conducted on 18 November 2022 by the DPRK. This missile launch is another blatant violation of United Nations Security Council Resolutions (UNSCR) by the DPRK. This reckless act, together with the evidence of ongoing nuclear activities, underscores the DPRK’s determination to advance and diversify its nuclear weapons and missile capabilities. It further destabilizes the region, despite calls from the international community for peace and stability.

The unprecedented series of unlawful ballistic missile launches conducted by the DPRK in 2022, including numerous intercontinental ballistic missiles, and the intermediate-range ballistic missile which recklessly overflew Japan, pose a serious threat to regional and international peace and security and undermine the global non-proliferation regime. They also pose a danger and unpredictable risk to international civil aviation and maritime navigation in the region.

We reiterate our demand that the DPRK abandon its nuclear weapons, existing nuclear programs, and any other weapons of mass destruction and ballistic missile programs in a complete, verifiable and irreversible manner and cease immediately all related activities. The DPRK cannot and will never have the status of a nuclear-weapon State in accordance with the Treaty on the Non-Proliferation of Nuclear Weapons (NPT) or any other special status in this regard. We urge the DPRK to return at an early date to, and fully comply with the Non Proliferation Treaty (NPT) and International Atomic Energy Agency (IAEA) safeguards and to fully abide by all legal obligations under relevant UNSCRs.

The DPRK’s actions demand a united and robust response by the international community, including the need for further significant measures to be taken by the UN Security Council (UNSC). We call on all states to fully and effectively implement all UNSC measures and sanctions against the DPRK and address the risk of weapons of mass destruction proliferation from the DPRK as an urgent priority.

The G7 expresses its full solidarity with Japan and the Republic of Korea and urges the DPRK to cease its destabilizing actions. We urge the DPRK to resume meaningful dialogue toward denuclearization and accept the repeated offers of dialogue put forward by the United States, Japan and the Republic of Korea. By diverting its resources from providing for the needs of its people into its unlawful weapons of mass destruction and ballistic missile programs the DPRK further aggravates the already dire humanitarian situation in the DPRK. We are committed to working with all relevant partners toward the goal of peace and security on the Korean Peninsula and to upholding the rules-based international order.