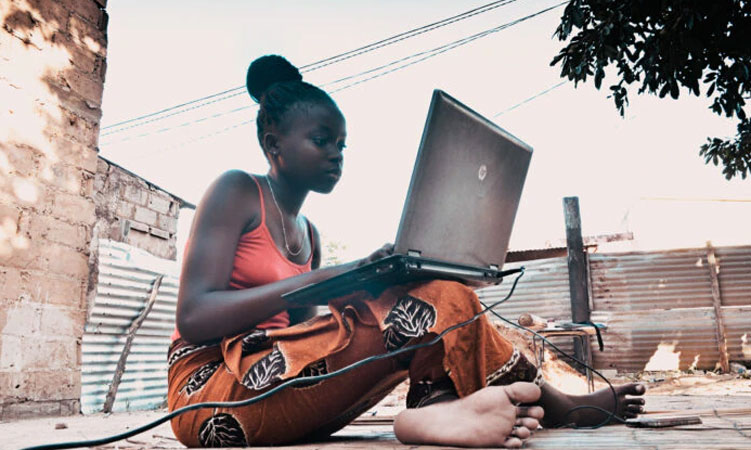 A woman works on her computer in Mozambique in 2020 as part of a U.S. Agency for International Development–funded program that promotes technological and digital inclusion for young and vulnerable women. (USAID/Gideon Américo Muiambo)

“In our deeply connected world, that’s not just a humanitarian concern, it’s an economic and a security concern for all of us,” Biden told the Group of Seven (G7) Summit in Schloss Elmau, Germany, on June 26.

He and the other leaders of the democratic nations in the G7 launched the Partnership for Global Infrastructure and Investment to support development of sustainable, quality infrastructure in developing and middle-income countries.

The partnership will make energy, health care and telecommunications more accessible through projects that reflect the G7 democracies’ shared values by following global best practices for transparency, partnership, and protecting labor and the environment.

In a June 26 memorandum on the partnership, Biden says infrastructure has long been underfunded in the developing world, leaving an estimated need of over $40 trillion.

To fight COVID-19 and other diseases, the U.S. International Development Finance Corporation, in collaboration with G7 nations, the European Union and other partners, provided $3.3 million to build capacity for industrial-scale vaccine manufacturing in Senegal.

Other projects planned to improve lives and increase prosperity include:

“We’re offering better options for countries and for people around the world to invest in critical infrastructure that improves” lives, Biden said.