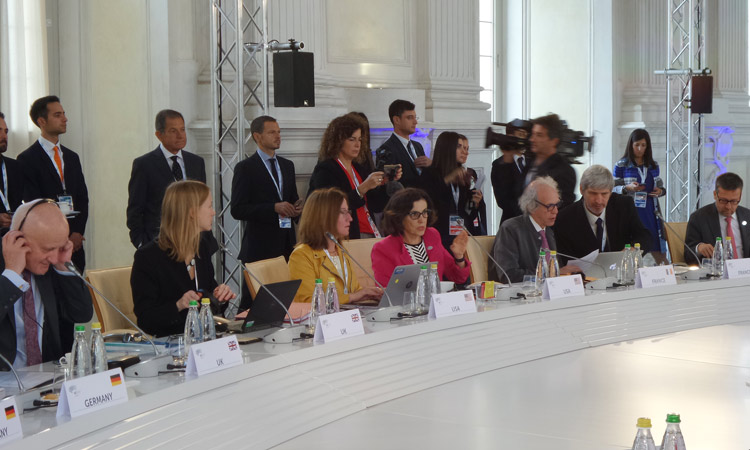 G7 Ministerial on Science in Turin

In the United States, government investments in basic science not only fund discovery, but serve to mitigate the risks of investing in innovative and forward-leaning ideas. The LIGO facility I mentioned in the last session is 20 years old, but we have been funding the gravitational wave research that led to developing this facility for four decades. A sustained financial commitment to high-risk-high-reward projects is key to realizing the benefits of the public investment.

So is international commitment.

The LIGO Scientific Collaboration is a group of some 1,000 scientists at universities around the United States and in 15 countries.

These investments required expertise from all sectors to design, fabricate, and operate the a large research facility in a complex environment. Yesterday, as we toured the France-Italy Virgo gravitational wave observatory, the director Federico Ferrini commented that running a large science facility takes the skills of a diplomat, a businessman, a highly technical expert, and a scientific researcher.

Our administration’s recent Research and Development Budget priorities statement reinforces a commitment to basic research, and directs us to prioritize funding basic and early-stage applied research that, supplemented by private sector financing of later-stage research and development, can result in transformative commercial products and services.

One example I would like to share from NSF is the Innovation Corps program, through which students are trained in entrepreneurship, or how to take research discovery to market. This program, only 5-6 years old, is now established in many universities and communities around the country, and has been adopted by several other federal agencies, States, and even other countries.

We are pursuing emerging opportunities for new partnerships with tech companies such as Google and Microsoft in the areas of cyberinfrastructure, cloud computing and next generation learning environments.

These partnerships total in the hundreds of millions of dollars and significantly leverage our public investments. We look forward to continued discussions on how basic research funded through creative and beneficial
partnerships can support innovation and economic growth.