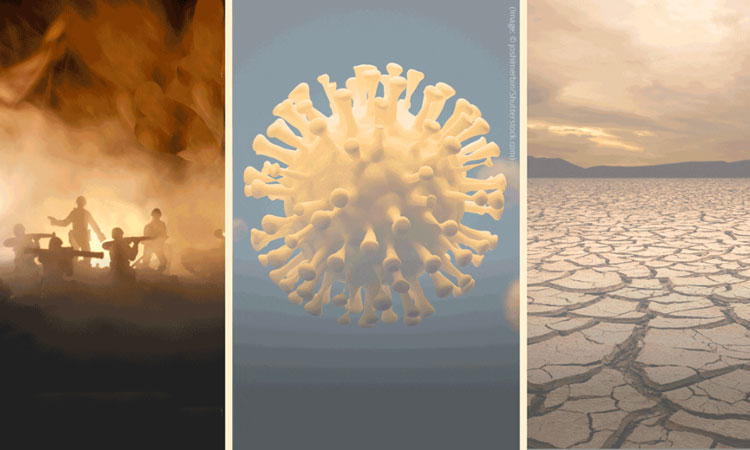 Food is an essential, but scarce, resource in many parts of world. Global conflicts, climate change and supply disruptions from COVID-19 have exacerbated the problem. This article takes a closer look at the impact of recent conflicts on today’s food crisis.

Ongoing conflicts in several nations contribute to the global food crisis and to increased hunger among vulnerable populations. Civilians are often primary victims, forced to leave their homes to seek food and shelter.

Conflict was the primary driver of hunger for 99 million people in 23 countries in 2020, Action Against Hunger said in a 2022 fact sheet.

Many conflicts now are yearslong. Some are over coveted natural resources:

And the number of conflicts is rising.

Russia’s February invasion of Ukraine is among them. Before the war, Ukraine produced enough food to feed 400 million people per year, many in Africa. That won’t happen this year, although in August shipments of Ukrainian grain finally began to leave Ukraine’s Black Sea ports destined for Africa.

Since February, the United States has provided over $5.7 billion in emergency food security assistance globally, including to African countries suffering from extreme hunger and malnutrition due in large part to conflicts in their home countries.

These are among the global conflicts that threaten food security.

Fighting in northern Ethiopia’s Afar, Amhara and Tigray regions and the drought in eastern and southern Ethiopia have driven many innocent civilians to the brink of starvation.

The conflict in the country’s Tigray region between the federal government and the Tigray People’s Liberation Front began in November 2020 and subsequently spread to the Afar and Amhara regions. More than 90% of Tigray residents require humanitarian assistance. Nearly 2.5 million people across all three regions have fled their homes.

More than 9 million Ethiopians in the north face severe hunger.

In July the U.S. Agency for International Development (USAID) announced it had provided more than $668 million in humanitarian assistance to Ethiopia in fiscal 2022. That includes funding to provide nutritional supplements to help 1.6 million malnourished children and the 4.4 million people who lack access to drinking water.

Since 1991, Somalia has experienced chronic food insecurity, recurring droughts and floods and widespread violence, including by the al-Shabaab terrorist group.

The terrorist group targets civilians in hotels and restaurants who are perceived to have ties to the government.

The U.N. estimates that nearly 3 million Somalis were forced to leave their homes and are internally displaced due to conflict and the effects of climate change.

Eight years of war between pro-government forces and Houthi rebels bestowed on Yemen one of the world’s worst humanitarian crises. The conflict and resulting economic collapse has left more than two-thirds of Yemen’s population in need of humanitarian assistance, including 19 million facing hunger.

A U.N.-negotiated truce was extended in August.

More than 377,000 Yemenis have died as a result of the civil war, according to a 2021 U.N. report. The conflict has displaced more than 4 million people (PDF, 289KB), mainly women and children. More than 2 million children in Yemen face deadly malnutrition.

Yemen relies upon imports for 90% of its grain and other food sources. According to the World Food Programme, 46% of wheat imports were from Russia and Ukraine.

In 2022, the United States has provided more than $1 billion in humanitarian assistance to the Yemeni people.