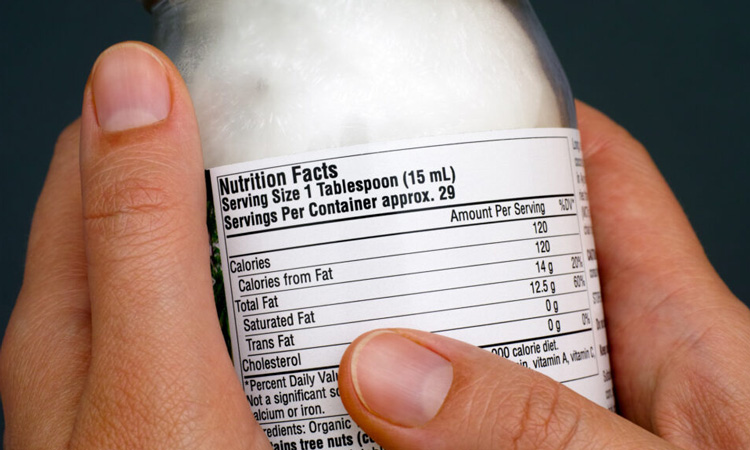 The FDA requires companies to put labels on their products that provide nutrition facts, such as the one on this jar of coconut oil, so consumers know the nutritional value of food they eat. (© Shutterstock)

The U.S. Food and Drug Administration (FDA) ensures that food produced in the United States is safe to eat, benefiting consumers at home and abroad.

The FDA, the U.S. government’s oldest consumer protection agency, regulates 78% of the U.S. food supply and has conducted international inspections since 1955. The U.S. Department of Agriculture (USDA) oversees meat, poultry and egg products imported to or exported from the United States.

These U.S. government agencies protect consumers from foodborne illness, applying the same standards for products headed to domestic or foreign markets. Unsafe food can cause more than 200 diseases and costs the world more than $110 billion annually in lost productivity and medical expenses.

According to the World Health Organization (WHO), 420,000 people die every year from foodborne illnesses, including 125,000 children under 5 years old. The United Nations marks June 7 as World Food Safety Day to highlight the benefits of food safety for people, the economy and the planet.

The U.S. government has worked to protect consumers from foodborne illness since the 19th century. Federal regulators began conducting chemical analyses to ensure the safety of agricultural products in 1848. FDA’s role began when Congress passed the 1906 Pure Food and Drug Act, barring diluted or misbranded food and medicine from interstate commerce.

The agency’s food safety efforts protect people in all 50 states, the District of Columbia and the U.S. territories. FDA oversight covers more than $2.8 trillion worth of food, medical products and tobacco, products that account for about 20 cents of every dollar Americans spend.

“Our ultimate goal is, and has always been, bending the curve of foodborne illness in this country by doing everything we can do prevent the contamination of foods,” FDA Deputy Commissioner for Food Policy and Response Frank Yiannas said.