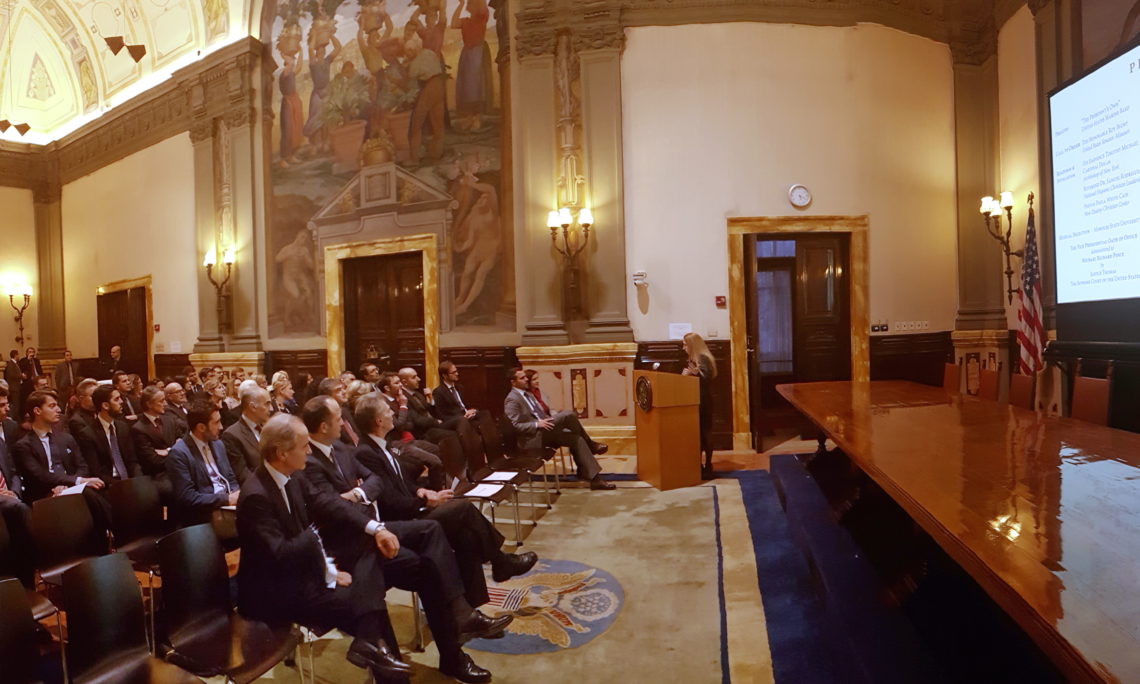 On January 20, Inauguration Day, Public Affairs Rome hosted an Inauguration Watch event at the Embassy for about 100 guests, including alumni of U.S. Government-sponsored exchange programs, think tankers, American studies academics, various young leaders, journalists and contacts. The program highlighted the peaceful transition of the U.S. Presidency, further strengthening our bonds with alumni and enhancing relations with other civil society contacts.

Chargé d’Affaires Kelly Degnan kicked off the event with the following remarks:

Good afternoon everyone, and welcome to the U.S. Embassy!

Today is Inauguration Day and we are about to witness an historic moment in my nation’s history: The swearing-in of a new President.  In approximately 40 minutes, President-elect Donald John Trump will become the 45th President of the United States of America.  This will be America’s 58th presidential inauguration.

I would like to spend the next few minutes telling you a bit about the rich history and traditions of Inauguration Day.

Let’s begin with the question of why today.  Why are the President and Vice-President sworn-in on January 20th?

Well, in 1845, Congress adopted a formula for determining the date for presidential elections: They would be held on the first Tuesday after the first Monday in November.  By tradition, Inauguration Day was the following March 4th.

This four-month gap was considered appropriate for the era.  It gave time for all votes to be tallied and the Electoral College to meet.  And it allowed the President-elect to move to Washington and to identify aides and assign cabinet positions.

But it also created problems.  The incumbent President became what we call a “lame duck” – an incumbent with reduced power and influence.

And this could have serious consequences.  For example, during the winter of 1860-1861, Southern secessionists armed themselves and seven slave states established the Confederate States of America.  The incumbent President was powerless to do anything and by the time Abraham Lincoln took office, the country was on the brink of civil war – with hostilities breaking out a few short weeks later.

Similarly, seventy years later, during the 1932-1933 transition from Herbert Hoover to Franklin Roosevelt, the economic crisis known as the Great Depression worsened and neither the incumbent President nor the President-elect was able to respond.

This lame duck period prompted Congress to propose a constitutional amendment reducing the length of the transition period.  The 20th amendment was enacted shortly thereafter and President Franklin Roosevelt’s second swearing-in occurred at noon on January 20, 1937.

And now, every four years like clockwork, on January 20 at noon, we swear-in the President.  Regardless of our political affiliation, we all celebrate the peaceful transition of power.

Well, what happens on Inauguration Day?  Let me walk you through some of the events.

Inauguration Day starts with a morning worship service.  This dates back to 1933, when President-elect Franklin Roosevelt and his wife Eleanor attended a service at St. John’s Episcopal Church, next to the White House, before leaving for the Capitol.  Although Roosevelt was not the first President to attend church on Inauguration Day, his attendance set a precedent that has been followed by every succeeding President-elect.

After their worship service today, President-elect Trump, Vice President-elect Pence and their spouses will be escorted to the White House by members of the Joint Congressional Committee on Inaugural Ceremonies.  There, they will meet briefly with the Obamas and the Bidens.

Throughout the 19th century and during the early decades of the 20th century, there were two separate ceremonies once everyone arrived at the Capitol.  The first was the swearing-in ceremony for the Vice-President.  It was a simple ceremony and took place inside the Senate chamber.

The second ceremony was to swear-in the President.  It has taken place at various locations in the Capitol.  The area in front of the Capitol’s east entrance was perhaps the most popular site, having first been used by President Andrew Jackson in 1829 for his inauguration.

In 1937, these ceremonies were combined into one grand event.  Over the years, music and poetry readings, invocations and introductions, military salutes and the national anthem, have been added.

It is now held – and has been ever since Ronald Reagan’s first inauguration in 1981 – outside, on the Capitol’s west front terrace.  This is a magnificent setting, overlooking the Washington Monument, the Lincoln Memorial and other landmarks on the National Mall.  Thousands gather on the Mall to watch.

A few words about today’s ceremony:  Michael Richard Pence will be sworn-in as Vice President.  The oath of office will be administered by Associate Justice of the Supreme Court, Clarence Thomas.

Then Chief Justice John Roberts will administer the oath of office to Donald John Trump.

Interestingly, aside from the time and date of the swearing-in, the oath of office is the only other component of Inauguration Day enshrined in the Constitution.

Every President since George Washington has uttered the same 35 words:

The nation’s first President took the oath of office in front of the Federal Building on Wall Street in New York City.  With the ceremony complete, the crowd below let out three big cheers and President Washington returned to the Senate chamber to deliver his brief inaugural address.  He called upon “That Almighty Being who rules over the universe” to assist the American people in finding “liberties and happiness” under  “a government instituted by themselves.”

Most Presidents are not that brief.

Presidents use their inaugural address to present their vision of America and articulate their goals for the nation.  Some of these addresses have become hallmarks of eloquence in American culture.

For example, in 1865, during the waning days of the Civil War, Abraham Lincoln stated,

With malice toward none, with charity for all, … let us strive on to finish the work we are in, to bind up the nation’s wounds, … to do all which may achieve and cherish a just and lasting peace among ourselves and with all nations.

In 1933, Franklin D. Roosevelt avowed that

We have nothing to fear but fear itself.

After President Trump’s inaugural address, President Obama and the First Lady will leave the Capitol to begin their post-presidential lives.  Their departure takes place with little ceremony.

Once President Obama has left, President Trump and the inaugural party will move to Statuary Hall in the U.S. Capitol.  There, in an elaborate 19th century setting, the inaugural luncheon will be served.

Afterwards, he, Vice President Pence and their families will make their way down Pennsylvania Avenue to the White House, leading a parade of ceremonial military regiments, citizens’ groups, marching bands and floats.  Once at the White House, they will review the parade from the Presidential Reviewing Stand, while thousands of other Americans will brave the cold and line the streets to watch the spectacle.

And so ends the afternoon.

This evening there will be a series of gala inaugural balls.  The first official inaugural ball dates back to 1809 and the inauguration of James Madison.  The inaugural ball has since become a highly anticipated highlight of Washington society.  Many of the inaugural gowns worn by First Ladies have been collected at the Smithsonian Museum of American History and this exhibit is one of the museum’s most popular attractions.

Tonight there will be three official balls; two for guests from across the country, and a third dedicated to the military, first responders, and other service personnel.

So, it is a busy day in Washington.

My friends, here in Rome, we are also participating in this historic moment.  So please join me, members of the Embassy community, and an anticipated 40,000,000 Americans watching throughout the United States, to the inauguration of the 45th president of the United States.