Home Homepage | News & Events | Independence Day at the U.S. Consulate in Naples: This year with a special “snowflakes flag” 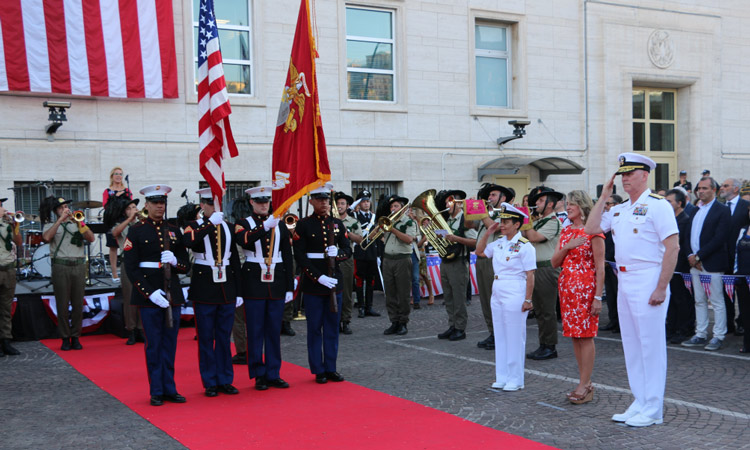 “The enduring bond between Americans and Italians continues to be based on a shared spirit of generosity and compassion, a culture of tolerance and respect for others, a mutual love of liberty, and a long history of partnership in business, the arts, science, and politics.”  With these words Consul General Mary Ellen Countryman underlined the strong relationship between the United States and Italy in her remarks to the 250 American and Italian guests in the courtyard of the U.S. Consulate General in Naples.  In attendance were also the Prefect of Naples Carmela Pagano and the Mayor of Naples Luigi De Magistris.

This year’s Independence Day – of which July 4 was the 241st anniversary – was the first celebrated in Naples by Mary Ellen Countryman since she assumed the duties of Consul General to Southern Italy in August 2016.

As a special tribute to strong U.S.-Italy relations, Consul General Countryman offered a very special dessert made by Neapolitan bakery Poppella – a selection of their famous “snowflakes” (fiocchi di neve) that were arranged, in different colors and designs, to reproduce the Stars and Stripes.

Celebrations continued with pop/ jazz music played by a U.S. Navy band, stars and stripes decorations, typical American dishes – pulled pork, burgers, hot dogs – as well as southern Italian food including pizza and buffalo mozzarella.  Guests also enjoyed a “selfie station” with a real Harley-Davison motorcycle and a Route 66 backdrop, and shared their photos using the #IDayNaples 2017 hashtag.  The event ended with fireworks on the waterfront, as in all traditional Independence Day celebrations. 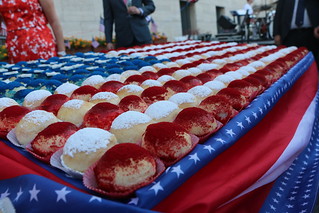