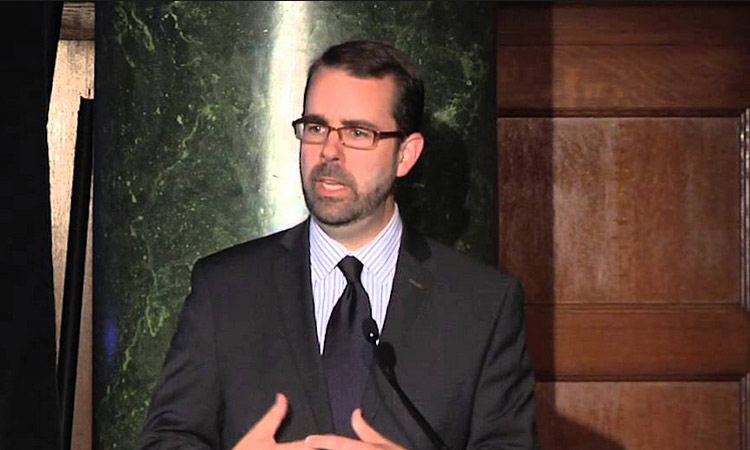 Knox Thames, Special Advisor for Religious Minorities in the Near East and South Central Asia

“Protecting Religious Communities”, Remarks by Knox Thames, Special Advisor for Religious Minorities in the Near East and South Central Asia

Religious minorities face a critical moment, as religious diversity is under assault in many areas of the world. Attacks by ISIS and other terrorists, as well as repression by authoritarian regimes, threaten the existence of religious minority communities across the Middle East. In response, the United States remains fully committed to assisting the victims of ISIS atrocities, promoting religious freedom, and protecting religious pluralism.

Countries benefit when all their people can observe their innermost beliefs and live peacefully in accordance with their consciences. For these reasons, and as a reflection of American values, the United States continues to urge all governments to respect religious diversity within their borders, to protect freedom of religion or belief, to decriminalize blasphemy and apostasy, and to ensure that each individual has equal rights and equal access to public services, security, and justice. We also work to protect the cultural heritage of ancient minority communities in the Middle East—because it preserves our common heritage and is a tangible demonstration of the historic religious pluralism of the region.

Religious freedom is not only a human right that belongs to every individual without exception, but its presence is one of the essential conditions for permanent peace, security, and stability.  Our own internal research shows countries that respect and protect religious freedom and other fundamental freedoms appear less likely to experience the development of violent extremism and terrorism. This is because perceptions of injustice or perceived threats to identity—including religious identity—are among the known drivers of terrorist recruitment and radicalization to violence. And recent scholarship from the State University of New York has demonstrated how the denial of religious freedom increases the likelihood of violence. They also concluded that the best way to combat violent extremism motivated by misguided religious ideologies is not by further restricting religious practices but rather by safeguarding their legitimate manifestations.

President Trump emphasized during his visit to Saudi Arabia the need to address radicalization to violence and the harmful effects it has on minorities. He called on the international community to stand together “against the murder of innocent Muslims, the oppression of women, the persecution of Jews, and the slaughter of Christians.” Vice President Pence also made clear that, “Protecting and promoting religious freedom is a foreign policy priority of the Trump administration,” which “…is fully committed in bringing relief and comfort to believers not only across the Middle East but across the world.”

Yet challenges continue to grow. Government repression endures, with actions targeting Christians and members of other religious minority groups, including jailing pastors and the targeting of Baha’is for mistreatment in Iran, prosecuting members of minority groups for blasphemy in Pakistan and Egypt, discriminatory actions against Ahmadis in Pakistan and Algeria, and enforcing limitations on the right to freedom of religion in Saudi Arabia.

But it is not only governments that persecute. We see persistent attacks on Christians and members of other religious minority groups coming from a variety of non-state actors. Examples of Christian populations being targeted by non-state actors include al-Qaa in the Bekaa Valley of Lebanon, in Sinai and the Egyptian heartland—Cairo, Alexandria, Tanta, and Minya—and ISIS’s atrocities across Iraq and Syria.

Members of other communities have also suffered greatly at the hands of violent extremists: ISIS attacks on Sunnis, Shia, Yezidis, Turkmen, Shabak and Kakai in Iraq; sexual slavery, gender-based violence, and abuse of Yezidis and Turkmen; and the disappearance of the Sabaean Mandeans from Iraq. ISIS targets Shia Muslims for just being Shia, and strikes out at any Sunnis who denounce its hateful ideology—including religious leaders.

To protect religious diversity and pluralism, and to see durable and lasting peace and security, we must all work together and forge international partnerships to protect freedom of thought, conscience, and religion or belief.  These efforts are underway.  For instance, I co-chair with my Canadian counterparts the International Contact Group for Freedom of Religion or Belief, a network of about 25 governments committed to advancing Article 18 of the Universal Declaration of Human Rights.  Together, the ICG has spoken out about and focused the world’s attention on religious freedom violations in Pakistan, Vietnam, Turkmenistan.  Recently several of the Contact Group member states joined together and publically called for Eritrea to unconditionally release the Eritrean Orthodox Patriarchate from a decade of house arrest.

In addition, the United States partnered with France and Spain to galvanize global action to protect religious minorities victimized by ISIS in Iraq and Syria.  High level conferences in Paris, Washington and most recently Madrid have challenged governments and others to do more to aid religious and ethnic minority communities threatened by ISIS and other terrorist organizations.  With ISIS on the retreat in Iraq, we appreciate Belgium’s timely offer to host the follow on conference in 2018.  We hope that the meeting in Belgium will be an opportunity for the international community to make financial commitments to assist religious and ethnic minorities in Iraq.

So with ISIS’s days in Iraq and Syria numbered and major combat operations hopefully drawing down, we are entering a new phase. The international community must now shift from the hard work of winning the military fight, to the difficult task of winning the peace.

The global and permanent defeat of ISIS—and whatever other groups may inherit its criminal violence and hatred—can only be achieved on a foundation of justice and accountability, respect for persons of faith and differing political persuasions, good and inclusive governance, and reconciliation.  We must encourage those in power to write fair laws and enforce them, to speak out in opposition when political leaders use hate-filled language to call for violence, and to practice empathy when community members are de-humanized and marginalized.  We must insist that countries treat all within their borders equally, regardless of faith or creed.  To ensure a durable and lasting peace, we must support the principles of democracy and rule of law, as well as human rights protections for all individuals, including women and girls, and in particular religious minorities.

In a recent study, RAND referred to this pathway as “legitimated stability,” observing that, “Stability is most consistent and enduring when it emerges naturally from popular satisfaction with governance and other socioeconomic conditions, rather than from government oppression or military action by external powers.” The report continued by emphasizing how, “Violent groups are defeated primarily through indirect methods, such as legitimization, democratization, economic aid, and regional coalition building.”

And as Secretary Tillerson recently said, “As we combine efforts to defeat the military, financial, and ideological support of terrorists, we expect to see progress in the Arab world toward greater political expression. He emphasized that to “prevent political activism from escalating into violence is to allow marginalized voices opportunities for political expression.”

Some countries argue that stricter control is the answer—that a free society can spiral into danger. Others posit that liberties place violent extremist forces outside the bounds of government observation and control and that too much freedom makes society weak.  Some fear religious diversity or freedom of conscience. However repressive policies penalize peaceful communities, as terrorists will never play by the rules. In fact, government repression builds a narrative of grievances for recruitment into their dark networks.

Consequently, we remain concerned about the human rights situation in many countries across the region. We support efforts to confront terrorism, but to be effective, those efforts must include protecting freedom of expression, supporting free participation in the political process, freedom of conscience, and treating all equally irrespective of religion. This also includes protecting space for civil society, which plays a vital role in providing services and holding the government accountable.

In closing, we are here out of a shared concern about the future of religious diversity and pluralism across the Middle East and around the world. By coming together today, we stand united in our joint condemnation of the atrocities ISIS has committed against religious and ethnic minorities, as well as the atrocities that ISIS committed against the broader populations in these countries. We stand together for freedom of religion or belief for everyone.

The question before all of us today is what more we can do as a community of values – a community that respects diversity of thought and belief – to help recreate conditions that give minorities confidence in a future in their ancestral homelands. Time is working against us. After years of terror, the rich tapestry of religious communities in the region has begun to fray and tear apart.

During my visits to Iraq, I have seen the vibrancy in what is left of these minority communities, but also their precarious and fragile existence. If robust steps are not taken in the coming months to provide security and stabilization assistance to religious minority communities, the exodus will likely continue.

But the news is not all bad.  In my extensive travels since taking up this post almost two years ago, I have witnessed examples of increasing religious tolerance in the region. I have seen this in the effort in Marrakesh where Islamic scholars promoted equal citizenship for religious minorities. I have seen this in Egypt with Muslim and Christian clerics coming together to promote interfaith dialogue. I have seen this in Tunisia with the remarkable display of government support for the annual pilgrimage to the Djerba island synagogue. I have seen this in the Persian Gulf, such as with the United Arab Emirates and Oman allowing for the construction of churches to host large expatriate communities as well as Hindu temples and Sikh gurdwaras.

From these discussions today, let us build off these positive examples, working toward greater respect for human rights, equality for all residents, religious freedom, and interfaith and interethnic tolerance and acceptance.  The best way to defeat ISIS and counter ideologies of hate is by protecting what they seek to exterminate – religious pluralism. Thank you.