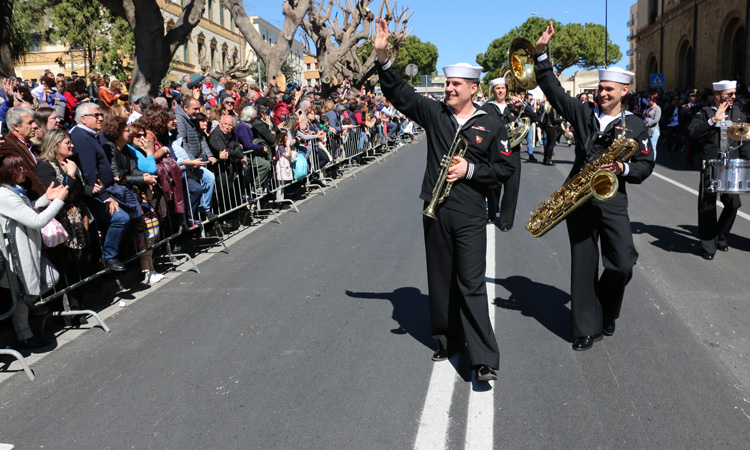 Whether it was “When the saints go marching in,” My girl” or “Stand by me,” the high-energy performances of the U.S. Navy “Topside Brass Band” at the “Almond Blossom Festival” were a memorable success!

As part of the annual ten-day Festival celebrating cultural diversity, our Consulate arranged for an ensemble of seven Navy Band musicians to perform during the International Folklore Festival in Agrigento, Sicily March 7-10. The festival featured 20 groups of artists, musicians and dancers, representing 17 different countries of Europe, Africa, Asia and South-America.

The band was enthusiastically welcomed by the Festival organizers, the director of the Archaeological park of Valle dei Templi, as well as Agrigento Mayor and Prefect. Crowds of all ages cheered and danced to their Dixieland-style, Rhythm & Blues and Motown music in multiple indoor and outdoor locations, including a two-hour Sunday morning closing parade through the streets of Agrigento, attended by some 50,000 Sicilian residents and visitors.

Sicilian media reported extensively and positively on the Navy Band’s participation in the festival. National state broadcaster RAI 1 aired a 2-minute story during the most popular daily evening show “La Vita in Diretta” where some international folk groups introduce themselves including the Topside Brass Band. 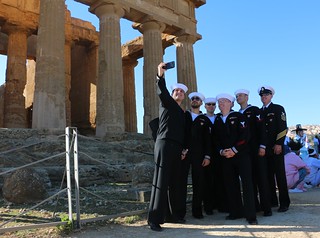