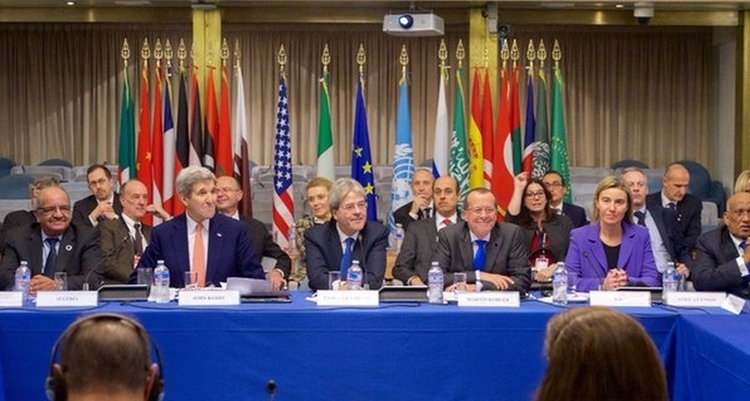 We welcome the participation of Prime Minister al-Sarraj in this Ministerial. We salute his leadership and the decision of the Presidency Council (PC) to liberate Sirte from Da’esh and secure the country from other terrorist groups. We reaffirm our solidarity with the Libyan people and express our sympathy for those who lost their lives in the fight against terrorism. We also welcome the efforts against terrorist groups as listed by the UN in other parts of Libya, including Benghazi, and commit to collectively pursue those efforts. We urge all Libyans to unite in their fight against terrorism. We reiterate our support for the Libyan Political Agreement (LPA) of Skhirat, Morocco signed on December 17, 2015 and its fulfillment, and for the Government of National Accord (GNA) as the sole legitimate government of Libya, as endorsed in UN Security Council Resolutions 2259 and 2278. We support the preservation of sovereignty, territorial integrity, unity, and national cohesion of the Libyan people. Libyans should decide their own future without foreign interference. We reaffirm our commitment to the United Nations Support Mission in Libya’s efforts under the leadership of the UN Special Representative of the Secretary General, to facilitate the implementation of the LPA and support the PC in addressing the political, security, economic, and institutional crises facing the country. The international community will not provide support to or maintain official contact with parallel institutions that claim to be the legitimate authority, but which are outside the LPA as specified by it.

We call on the Presidency Council to present a new Cabinet to be approved by the House of Representatives (HoR) as the legislative authority of State, and on the HoR to support national reconciliation by gathering all the Members of Parliament and fulfilling its duty to hold a free and fair vote on the revised Cabinet and on the Constitutional amendment to enshrine the LPA in Libyan law without delay. We reiterate our conviction that all segments of society from all Libya’s regions must find their rightful place in the political process. Efforts to obstruct progress, including with the proper functioning of LPA-mandated institutions will further jeopardize the security and stability of Libya. We call on the GNA to work urgently to restore essential services, provide humanitarian assistance, and create conditions for the safe and dignified return of internally displaced persons and refugees. We urge the GNA to resume oil production to strengthen Libya’s economy for the benefit of all Libyans.

Given recent tensions in various parts of the country, we urge full de-escalation and avoiding provocative actions. We share the Libyan people’s desire to transform Libya to become a secure, democratic, prosperous, and unified state, where state authority and the rule of law prevail. This can only be achieved peacefully through inclusive political dialogue and national reconciliation. Only unified national forces can truly ensure security and defend the country from terrorism. We commend the PC’s efforts to unify professional military forces which include Libyans from across the country, and to form a capable, professional Presidential Guard to protect the PC. We urge swift progress in this endeavor to unify Libya’s military forces under the auspices of the PC and in accordance with the LPA.

The GNA is the sole legitimate recipient of international security assistance. We stand ready to respond to its requests for international assistance to train and equip the legitimate Libyan military and security forces throughout Libya through an appropriately scaled exemption to the arms embargo for procurement of lethal materiel necessary to counter Da’esh and other UN-designated terrorist groups. We fully support the PC’s requests for security assistance to counter Da’esh and other UN-designated terrorist groups for a united national security force. We remain committed to upholding the arms embargo, and commend EUNAVFOR Sophia’s efforts to prevent illicit weapons shipments on the high seas.

We support the fulfillment of the LPA’s mandate to keep oil infrastructure, production, and export under the exclusive control of the National Oil Corporation (NOC) acting under the authority of the PC. All oil revenues generated by the NOC must be transferred to the Central Bank of Libya (CBL), which must put the funds at the disposal of the PC. We support Prime Minister al-Sarraj’s call for dialogue to reduce tensions in the oil crescent and applaud his leadership in this regard. We welcome the recent transfer of the oil facilities in the oil crescent to the NOC as well as the plans to increase oil production and exports.

We underscore that Libya’s national economic institutions, including the NOC, CBL, and Libyan Investment Authority (LIA), must function for the benefit of all Libyans as set forth in the LPA. The PC is charged with preserving and protecting Libya’s resources and patrimony for the benefit of all Libyan people. Libya’s oil belongs to the Libyan people.

We are committed to working with the PC on plans for stabilization and reconstruction in Sirte. We take note of the recent UN Humanitarian Appeal for Sirte and welcome contributions for its swift and full implementation. We underline the need for stabilization to all areas liberated from terrorism, based on principles of inclusiveness and local ownership. We urge the PC to launch the Benghazi Reconstruction Fund. We welcome the establishment of the UNDP Stabilization Fund. We express appreciation for the early actions by the UNDP Stabilization Fund to provide assistance to cities in all of the regions of Libya. We underline our firm commitment to providing the GNA with technical and economic assistance as requested.

Over the next year the GNA must prepare for a peaceful transition to a permanent, elected Libyan government. We strongly urge the Constitutional Drafting Assembly to complete its work and present the draft Libyan Constitution for a referendum in 2017.

We commend the continuous efforts of the neighboring countries in support of the UN-led political process. We stress the importance of regional support for Libya and its democratic transition. In this context, we take note of the decision of the Arab League to appoint a Special Envoy for Libya and welcome its determination to pursue its efforts to advance the LPA in support of a political solution. We also welcome the efforts of the African Union and its Contact Group in this regard.