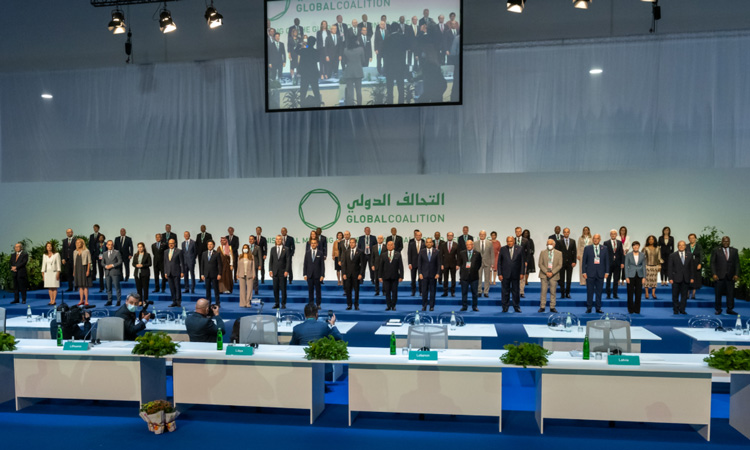 The following statement was released by United States Secretary of State Antony J. Blinken and the Foreign Ministers of the Global Coalition to Defeat Daesh/ISIS following today’s meeting.

The Ministers of the Global Coalition to Defeat Daesh/ISIS, reconvening in-person after two years, met today in Rome at the invitation of Italian Minister of Foreign Affairs and International Cooperation Luigi Di Maio and U.S. Secretary of State Antony J. Blinken. The Ministers reaffirmed their shared determination to continue the fight against Daesh/ISIS, and to create conditions for the enduring defeat of the terrorist group, which remains the Coalition’s sole purpose, through a comprehensive, coordinated, and multifaceted effort. The Ministers welcomed new members joining the Coalition – Central African Republic, Democratic Republic of the Congo, Mauritania, and Yemen. Together the Ministers emphasized the protection of civilians as a priority and affirmed that international law, including international humanitarian law and international human rights law, as applicable, as well as relevant UN Security Council resolutions, must be upheld under all circumstances.

The Ministers committed to strengthening cooperation across all Coalition lines of effort in order to ensure that Daesh/ISIS Core in Iraq and Syria, and its affiliates and networks around the world are unable to reconstitute any territorial enclave or continue to threaten our homelands, people, and interests. The Ministers remain firmly united in our outrage at atrocities perpetrated by Daesh/ISIS and in our determination to eliminate this global threat, and stand alongside survivors and families of victims of Daesh/ISIS crimes working for accountability.

Daesh/ISIS no longer controls territory and nearly eight million people have been freed from its control in Iraq and Syria, but the threat remains. The resumption in Daesh/ISIS activities and its ability to rebuild its networks and capabilities to target security forces and civilians in areas in Iraq and Syria where the Coalition is not active, requires strong vigilance and coordinated action. This includes allocating adequate resources to sustain Coalition and legitimate partner forces’ efforts against Daesh/ISIS, and significant stabilization support, both to address the drivers that make communities vulnerable to recruitment by Daesh/ISIS and related violent ideological groups, as well as to provide support to liberated areas to safeguard our collective security interests. In this regard, the Ministers noted the 2021 Pledge Drive for Stabilization as an important means to help sustain the recovery of areas liberated from Daesh/ISIS and prevent its resurgence. The Ministers reaffirm that Daesh/ISIS will continue to be pressured by curbing its ability to raise revenue, enhancing information sharing on terrorists through bilateral and/or multilateral channels like INTERPOL, and fighting against Daesh/ISIS’ toxic propaganda and denying the group space to exploit social media online.

The Ministers acknowledged Iraq’s efforts to counter Daesh/ISIS’ remnants and prevent its resurgence, and commended the increased capacity of the Iraqi forces to combat Daesh/ISIS. Appropriate measures to enhance the operational efficiency and coordination of our collective efforts to maintain the necessary pressure on Daesh/ISIS remain essential. The Coalition operates in Iraq at the request of the Government of Iraq in full respect of Iraq’s unity, sovereignty, and territorial integrity, and to the benefit of the Iraqi people. The Ministers firmly condemned the continuing attacks against Coalition personnel and convoys, and diplomatic facilities, emphasizing the importance of the Government of Iraq protecting Coalition assets. The Ministers welcomed the incremental expansion of NATO’s non-combat advisory, training and capacity building mission in Iraq based on the requirements and consent of the Iraqi authorities and complementing the Coalition’s efforts. The Ministers also welcomed the EU’s support to the Iraqi authorities through the EUAM Iraq Mission.

In Syria, the Coalition stands with the Syrian people in support of a lasting political settlement in accordance with UN Security Council Resolution 2254. The Coalition must continue to be vigilant against the threat of terrorism, in all its forms and manifestations, to build on the success it has achieved and continue to act together against any threats to this outcome and to avoid security vacuums that Daesh/ISIS may exploit. The Coalition continues to support inclusive local recovery and stabilization in areas liberated from Daesh/ISIS and reconciliation and reintegration efforts to foster conditions conducive to a Syria-wide political resolution to the conflict under the parameters of UN Security Council Resolution 2254.

In a session of the meeting focused on the security situation in other continents and regions, particularly Africa, the Ministers noted with grave concern that Daesh/ISIS affiliates and networks in sub-Saharan Africa threaten security and stability, namely in the Sahel Region and in East Africa/Mozambique. The Coalition is committed to working with affected countries to address the threats posed by Daesh/ISIS in Africa to ensure the enduring global defeat of the organization upon the request and prior consent of the countries concerned, and in full respect of international law and in close coordination with existing initiatives, notably the Coalition for the Sahel and the Global Counter-Terrorism Forum. The Ministers welcomed the presence of delegations from several African nations as observers to this ministerial meeting. The Ministers discussed that reinforcing civilian state institutions and consolidating the rule of law, including law enforcement capacity, will be an essential component of combatting Daesh/ISIS, and that the Global Coalition to Defeat Daesh/ISIS will seek to have effective engagement on the African continent. The Ministers tasked the Coalition Working Groups to assess ways in which they can contribute to counter Daesh/ISIS efforts in the affected regions. The Ministers also welcomed Afghanistan’s efforts to counter the Islamic State in Iraq and Syria-Khurasan (ISIS-K).

Recognizing the challenge posed by foreign terrorist fighters who are in custody, as well as their family members who remain in Syria and Iraq, the Ministers committed to pursuing existing effective justice and accountability mechanisms in close coordination with the countries of origin. This also includes accountability for fighters who have used sexual violence as an instrument of terror. The Coalition remains committed to promoting efforts to ensure that accused terrorists, including those of foreign nationalities, are treated appropriately and tried consistently with applicable international law obligations, including fair trial guarantees, and urges the custodians of the detained Daesh/ISIS terrorists to treat them humanely at all times, in accordance with international law.  The Ministers further recognized that the situation for Daesh/ISIS detainees and family members in northeast Syria is of grave concern and recognized the importance of finding a comprehensive and long-term solution to this serious issue.

The Coalition reaffirmed its belief that a comprehensive and collective effort remains necessary to achieve a full and enduring defeat of Daesh/ISIS worldwide. The Global Coalition to Defeat Daesh/ISIS has proven that it is a cohesive, responsive tool that has achieved notable successes through military, political, stabilization, counter-messaging, financial, and law enforcement lines of effort.

The Ministers also reaffirmed their intent to hold the next ministerial meeting of the Global Coalition by June 2022 and to hold a Small Group Political Directors Meeting in Brussels in the fall of 2021, circumstances pending.