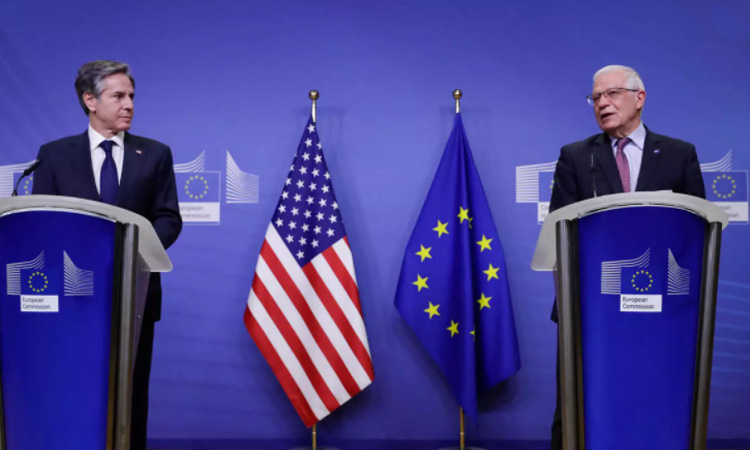 On March 24, Secretary of State Antony J. Blinken and EU High Representative for Foreign Affairs and Security Policy/Vice President of the European Commission Josep Borrell met in Brussels to discuss ways to strengthen the U.S.- EU relationship and coordinate responses to priority foreign policy, security, and economic issues.  They also committed to cooperate in the face of global challenges, including addressing the global climate crisis, bringing an end to the COVID-19 pandemic, facilitating a sustainable economic recovery, and defending democratic values and fundamental freedoms including within multilateral structures.

During the meeting, the two sides decided to re-launch the bilateral dialogue on China, as a forum to discuss the full range of related challenges and opportunities.  They acknowledged a shared understanding that relations with China are multifaceted, comprising elements of cooperation, competition, and systemic rivalry.  They also decided to continue meetings under the framework of the dialogue at senior official and expert levels on topics such as reciprocity, including economic issues; resilience; human rights; security; multilateralism; and areas for constructive engagement with China, such as climate change.

Secretary Blinken and High Representative Borrell confirmed that credible multi-party democracy, the protection of human rights and adherence to international law support the stability and prosperity of the Indo-Pacific.  Both aim to cooperate to promote secure, sustainable, free and open maritime supply routes and supply chains and look forward to deepening cooperation with like-minded partners where interests and approaches intersect.

The two principals also discussed U.S.-EU partnership on climate action and working cooperatively to raise global ambition to put the world on a path to net-zero emissions by 2050.

The two sides plan to work together in multilateral fora, such as through the WHO and COVAX initiative to jointly address the global challenges of the COVID-19 pandemic, including facilitating global distribution of safe and effective vaccines, addressing humanitarian impacts, and building future pandemic preparedness, including through advancing global health security.

Secretary Blinken and High Representative Borrell acknowledged that the Joint Comprehensive Plan of Action (JCPOA) remained a key achievement of multilateral diplomacy despite existing difficulties.  They shared concerns about Iran’s continued departure from its nuclear commitments under the JCPOA and underlined their full support for the work of the IAEA to independently monitor Iran’s nuclear commitments.  Secretary Blinken re-affirmed the U.S. readiness to reengage in meaningful diplomacy to achieve a mutual return to full implementation of the JCPOA by the United States and Iran.  The High Representative welcomed the prospect of a U.S. return to the JCPOA.  Both sides expressed support for the ongoing diplomatic efforts, and the contacts of the High Representative as JCPOA Coordinator with all relevant partners, to ensure full implementation of the JCPOA nuclear and sanctions lifting commitments.  The United States expressed readiness to engage in result-oriented discussions to that end.

Secretary Blinken and High Representative Borrell noted their determination to further address, in a coordinated manner, Russia’s challenging behavior, including its ongoing aggression against Ukraine and Georgia; hybrid threats, such as disinformation; interference in electoral processes; malicious cyber activities; and military posturing.  Both sides also decided to coordinate their response to the shrinking space in Russia for independent political voices, civil society and media freedom and the dwindling respect for human rights and the rule of law.  At the same time, both sides declared that they are ready to engage with Russia on issues of common interest and to encourage Russia to abandon confrontational approaches.

They also decided to continue close cooperation to encourage comprehensive reforms in the EU Eastern neighborhood, including South Caucasus countries.

The two principals underscored that the United States and the EU share a strong interest in a stable and prosperous Western Balkans region.  They reaffirmed their commitment to work together to support reconciliation and improve governance, build resilience and push forward key reforms for EU integration across the region.  U.S.-EU cooperation on the ground is vital for progress, including on the EU-facilitated dialogue on normalisation of relations between Kosovo and Serbia.

Secretary Blinken and High Representative Borrell affirmed the United States and the EU have a strategic interest in a stable and secure environment in the Eastern Mediterranean and will work hand in hand for sustainable de-escalation.  Both the United States and the EU are interested in the development of a cooperative and mutually beneficial relationship with Turkey, underpinned by rule of law and respect for fundamental rights.

The two principals shared their concern about the continuing humanitarian tragedy and human rights violations and abuses in Tigray.  They discussed a variety of measures to support unhindered humanitarian access, investigations of human rights violations and abuses, a cessation of hostilities, and the immediate withdrawal of Eritrea from Ethiopian territory.

On the Grand Ethiopian Renaissance Dam (GERD) negotiations, they called on all parties to show flexibility and move promptly to resume productive negotiations in the coming weeks.  They expressed concern over increased tensions between Sudan and Ethiopia and encourage both countries to resolve their difference through peaceful means. They also discussed the situation in Somalia, where they expected a political consensus to deliver an election without delay.

The United States and the European Union intend to intensify their cooperation on Afghanistan, together with key partners, to advance the peace process and to ensure the long-term stability and prosperity of the country.  The European Union and its Member States are the largest civilian assistance donors to Afghanistan, contributing to the common goal of stability in the region.

Secretary Blinken and High Representative Borrell expressed support for continued NATO-EU cooperation.  They agreed that NATO and the EU need new ways of working together and a new level of ambition because the multiple and evolving security challenges that NATO Allies and EU Member States face make robust NATO-EU cooperation essential to our shared security.  The two principals recalled that capabilities developed through the defense initiatives of the EU and NATO should remain coherent, complementary and interoperable.  They also noted that EU defense initiatives should enhance the European contribution to Transatlantic security and can offer concrete opportunities for cooperation between the EU and the United States.  With this in mind, the principals supported the fullest possible involvement of the United States in EU defense initiatives and enhanced dialogue on these issues.