Home Homepage | News & Events | Joint Statement: The U.S. and the EU Commit to Greater Cooperation to Counter the Climate Crisis 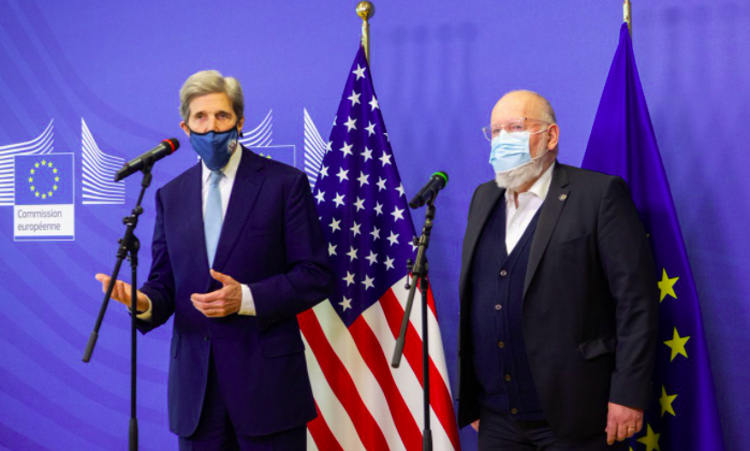 We are committed to renewing our strong alliance in the effort to deal with the climate crisis.  Having worked closely to deliver the landmark Paris Agreement, we are committed to ensuring its success by reducing our own emissions and by cooperating with our global partners, particularly the other major economies, to strengthen their climate ambition.  The United States is committed to net zero greenhouse gas emissions no later than 2050 and aims to announce its nationally determined contribution under the Paris Agreement at or before President Biden’s Leaders Summit on Climate on April 22.  The European Union has committed to climate neutrality in 2050 and intends to increase its 2030 climate ambitions by cutting its emissions by at least 55% compared to 1990.  It is now working on a comprehensive ‘Fit for 55 Package’ expected in June of this year to ensure that these ambitions are translated into effective action.  The U.S. Summit, which includes a leader-level reconvening of the Major Economies Forum, is one of the key milestones for increasing momentum on the road to a successful COP26 in Glasgow, and the Ministerial Meeting on Climate Action (MOCA) to be held in two weeks will kick off high-level discussions and help marshal international critical mass.

We urge all countries to take the necessary steps to keep a 1.5-degree Celsius temperature limit within reach, including through commitments to net zero emissions by 2050, specific net zero strategies, and ambitious nationally determined contributions.  We also resolved today to work together and with other countries to help the world’s most vulnerable cope with the devastating impacts of climate change.

These urgent challenges cannot be met by governments alone.  We are encouraged by the strong climate efforts of many leading companies and will work closely with the private sector to mobilize the investment and transformative mitigation and adaptation technologies needed to stem the climate crisis.  We are heartened by the countless youth and other citizens who are joining in the climate effort and holding leaders accountable for the well-being of our planet and future generations.