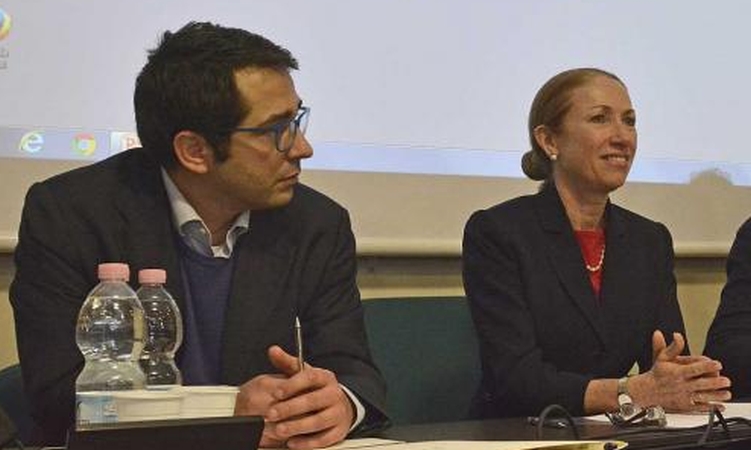 I will start with a quote from a 1992 article written by Professor Maurizio Vaudagna, who invited his colleagues and all “the non-English speaking historians of American history in Europe to abandon the melancholic but somewhat comfortable situation of being marginal in both worlds.” This quote is useful to introduce a short talk on Italian historians of the United States. This exercise has been already carried out by Professor Vaudagna himself, who in a 2007 article described the emergence of four different generations of scholars. I will tackle this issue from a different perspective. I will try to understand if Italian trends in scholarly writing about American history are similar to a more general European trend and how they interact with the international community of scholars in the same field. There is one basic assumption in this: the assumption that “an outsider perspective offers a privileged perspective”—in this case, on American history.

So, what I would like to do is to try to understand whether the location/geography/place has an impact on history writing about the United States. To anticipate my point, the answer to this question is that location is important: It was crucial and fundamental to the writing, research and study of American history between 1945 and, let us say, the 1970s. Then, its importance constantly decreased. Of course, location, geography and place do not mean nationality—I refer to a broader definition of these words that encompasses the cultural and intellectual air a scholar can breathe, and thus the cultural, political and intellectual debates, the influence of one’s audience and the society at large.

This point is particularly important for Italy, a country in which—especially after 1945, but to some extent for the entire 20th century—society felt it had to come to terms with what America was perceived to stand for, its dynamism and its modernity. In the most general terms, the Italian reaction to the United States showed an essential duality. On one side, we see an enthusiastic acceptance of the United States as a quintessential model of democracy, capitalism and modernity. On the other side, we have a rejection or a skeptical attitude toward the United States that dates back to Catholic criticism of American secularization, to fascist criticism of democracy and American modernity and, since 1945, to the existence of the largest Communist party of Western Europe.

So, in Europe, a professionalized study of America history began in the early 20th century, although it had to struggle to impose itself as an autonomous discipline. It was only in 1930 that the first British chair in American history was established (UCL). The real boom of American studies in Europe and in Italy arrived only after 1945, given the fundamental role the United States had in defeating Nazism and fascism; in ending the Second World War; in the political, institutional and economic reconstruction of Europe; and, of course, given the American commitment to protect Western Europe since the inception of the Cold War.

In Europe and in Italy, a new generation grew up listening to American music, watching American movies, drinking American soft drinks and consuming other American products. The Cold War also provided fertile ground for cultural and public diplomacy initiatives. Both the American government and private philanthropic organizations began to promote the study of the American past and American society in Europe and in Italy. Among such initiatives, for example, the Italian public became familiar with the red-spine books series Collezione di storia Americana, edited by il Mulino.

So, since 1945, we can see the development of three main approaches in Europe:

1) In Great Britain, thanks to the so-called special relationship, a common language and, I would also add, a common publishing market, British historians of the United States interacted and were deeply involved with their American colleagues.

2) In the Soviet Union and in other socialist countries, of course, Marxism-Leninism provided the fundamental lens through which to study the history of American capitalism.

3) In Western Europe, we see an original approach to American history that intertwines a genuine intellectual interest in the American past with a public and political commitment.

The first Italian scholars of American history emerged after 1945, although there was no chair in American history. They were mostly historians of political thought or modern history. They saw the United States as a sort of distant mirror through which they could find some possible solutions to Italian problems. This is quite natural for comparative studies, but if we look at the political and cultural debate of those years, a debate that put reconstruction under the spotlight, we can also understand the directions of Italian scholarly writing.

For example, the most representative of these early scholars, Alberto Acquarone, started to study the American constitution and its genesis, the American Revolution. In a book in which he compared the American Revolution with the French Revolution, he described the American Revolution as a peaceful and legal event, while the French Revolution was a violent and bloody event that ended with Robespierre’s Terror. However, Acquarone had a centrist and liberal (in the European sense of the term) background. A few years later, another scholar with a different background began to study the other founding moment in American history, the Civil War. Professor Luraghi reached an original and controversial interpretation of the war, in which slavery of course was crucial, but he also suggests the idea that the exploitative industrial economy could not accept the existence of a different economic model.

To these scholars, historical writing about the United States was above all a civic duty and a mission, rather than just an exercise in historical writing. Their aim was to investigate the American past to find the pros and cons of the American experience and its lessons for Italy. This means also that they were fully part of the Italian academia and that their research was primarily addressed to the Italian public.

Something changed in the late ‘60s early ‘70s. To start, there was a different international and national political landscape. Some events from the period cast a prolonged shadow over the intellectual and political debate: the global protest of ‘68; the global crisis of ‘70; a new perception of the Soviet Union, of the United States and of the Cold War. These were different problems that modified the perception of the United States in the world. Incidentally, these new trends contributed to a different way of conceiving, studying, teaching and writing about American history in Italy.

In addition to this, there were of course more Atlantic crossings and links that gave Italian historians more contacts with their American colleagues and that made them more aware of trends in the American and international academic debate. Italian scholars followed the historiographical debate taking place in the United States wherein a number of books began to challenge what was then called the master narrative of American history. Furthermore, Italian scholars began to focus on “The Other America,” those groups that were excluded by the master narrative: Native Americans, minorities, women (Baritono, Vezzosi) and workers and trade unions (Testi, Fasce).

For the first time, in Eastern Europe, we see the creation of a number of centers and university departments devoted to the study of American culture, literature, politics and history. To some extent, this interest had many similarities with what happened in Italy after 1945: Scholars in Eastern Europe began to look at the American model and its evolution to find lessons to use in rebuilding their states. In Poland, for example, there are at least three centers dealing with the construction of the U.S.: one deals with federalism; another one with legal history; and the last with the role of religion in American history.

We have a growing number of historians of the United States in Western Europe and in Italy as well because of the increase in university enrollment since the ‘70s. In 2005, there were 26 historians of the U.S. in the Italian academic system. With regard to Italian historians who came of age after the Cold War, they are truly and completely transnational and international in their formation, research and teaching activities. Professor Fiorentino studied in the United States and then came back to Italy, but others followed a different path. Alessandro Brogi studied in Italy and then moved to the United States, where he teaches American diplomatic history. Mario del Pero studied in Italy and spent 10 years in Bologna, but at the same time he was teaching and doing research at NYU and Columbia University; he has now moved to Paris. So, it is a generation (if we adopt Vaudagna’s definition of generation, I would say a generation and a half) that is totally transnational. They currently teach and write in English for an international audience.

A final remark: Can we consider, as part of a global network of scholars of American history, the evolution of Italian historians of the United States to be a success story?

We have said that in 2005 there were 26 tenured positions in Italian universities. Now we have just four full-time scholars. The discipline is grouped in the “SPS 05 – Storia e Istituzioni delle Americhe” that is home to specialists in North American studies and Latin American studies. This area has 11 professors and researchers.

Why did this happen? My answer is threefold:

1) The general perception of the U.S. and the pervasive role the United States has in our daily life. We feel so familiar with and confident about the United States that we feel free to talk about American history, politics and literature without really knowing them. The more familiar we are with a vague idea of America, the more we feel confident to talk about it and the less we rely on professional scholars. This means also that the gap between the general perception of the United States and specialist knowledge and perception is increasing. As an example, we have “isolationism.” If you open an Italian newspaper, you will probably see this term. A scholar will never use such a term to describe American foreign policy—or at least he knows that, during the 20th century, isolationism makes sense only for a very narrow moment in American foreign relations during the ‘30s. The lack of a strong field of American history favors general misperceptions.

2) It is little wonder that the economic and financial crisis brought deep cuts in public spending for humanities and area studies. There is little to comment on about that. The little available funding goes to hard sciences, and this could become a problem.

3) Finally, I would also say that this is a consequence of the scientific evolution of the field. We started with Professor Vaudagna’s invitation to be more transnational and less provincialized, and one of the consequences is that a specific Italian or West European approach to the study of the American past has disappeared. Thus, it is a crisis of the role of the outsider because the distinction between insider and outsider is disappearing.