Maker Faire 2016: The Future of Everything

DCM Kelly Degnan wished well to the over 400 innovators, students and experts who participated in the opening conference of the fourth edition of Maker Faire, at the Fiera Roma today.  Over 30 countries from all over the world are represented at the Faire, where innovators will showcase new technologies and feature experimentation across the spectrum of science, technology, engineering, arts, and mathematics (STEAM) over the next three days.

Over 1,000 classes, close to 25,000 students from all over Italy booked an activity at the Faire on Friday morning, the time reserved to school, and thousands of visitors are expected over the weekend.  The event is based on the American “Maker Movement” founded by the tech-influenced DIY (do-it-yourself) community.

The Embassy, in collaboration with the Museum of Science and Technology of Milan and the Exploratorium of San Francisco, contributed a ‘tinkering’ laboratory to the Faire.  The Embassy and the organizers, AssetCamera, also hosted the Director of MIT’s Center for Bits and Atoms, Neil Gershenfeld, the inventor of the FabLab. 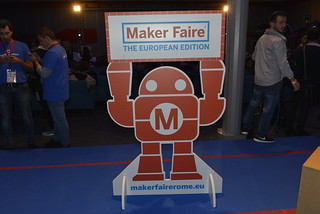